African bonds remain under the cosh of hawkish central banks

Reports that the ECB may announce a 75bp rate hike reversed gains on the USD, which backed away from its 20yr high. The EUR has now found some stability around parity, and so long as talk of rate hikes from the ECB continues, the EUR-USD will resist the temptation to sink much lower. There is a lot priced into the USD, and the theme of widening monetary policy disparity needs to persist for it to continue surging from strength to strength. Anything that threatens that expectation will translate into a correction in the USD. That appears to be unfolding now, with the EUR-USD back at parity and the GBP-USD trading back above 1.1700. Even the JPY has managed to claw back some ground this morning, although it remains firmly on the defensive.

Egypt: Speaking yesterday, Finance Minister Mohammed Maait said that talks with the International Monetary Fund (IMF) were moving in a “reassuring direction.” Maait added that the size of the IMF package has yet to be decided, but Egypt has agreed to reduce the budget deficit to 6% of GDP in the current fiscal year. The Egyptian government plans to cut the deficit to 4% by the fiscal year 2026-27, while the debt to GDP ratio is forecast to drop to 85.6% by the end of the current fiscal year. Meanwhile, Egypt is working with China to issue $500mn or more in panda bonds. Overall securing an IMF deal as soon as possible will help Egypt narrow its funding gap in the context of a chronic current account deficit and weak capital inflows.

Ethiopia: Data from the Finance Ministry’s debt statistics office showed that Ethiopia’s public external debt fell by 5.4% to $29.5bn at the end of June. Meanwhile, central government debt accounted for 68.1% of the total, while state-owned companies made up the balance. Ethiopia repaid $2.1bn in the year, of which $1.6bn was for principal payments. The bulletin also showed that over the past year, about $1bn in foreign financing was disbursed, less than the amount four years ago. Disbursement had dropped due to less loan flow to state companies.

Kenya: The Central Bank of Kenya has reportedly renewed two long-term bonds seeking to raise KES 50bn ($414.9mn). The bonds on offer include a 15-year tenor initially sold in April at an average interest rate of 13.94% and a 10-year tenor auctioned in May at an average interest rate of 13.49%. The securities are on sale until September 13, when the period of the auction closes. The re-opening of the securities comes at a time when fixed-income investors seek improved returns in response to higher inflation, forcing the central bank to reject some of the most aggressive bids.

Mozambique: To join the list of the world’s liquefied natural gas exporters, Mozambique may have to wait a little longer after a vessel that was destined for its first offshore production platform changed course at the week and sailed away. Ship tracking data compiled by Bloomberg showed that the tanker, known as British Mentor, had been due to arrive on August 24 at the Coral-Sul floating LNG facility that Italy’s Eni is commissioning. After spending a couple of days drifting off Mozambique’s coast, it changed its destination over the weekend and started sailing toward Qalhat, Oman, home to another LNG terminal. Energy buyers in Europe have been eagerly anticipating production from Eni SpA’s project in Mozambique’s northern waters to help ease the global gas shortage ahead of the crucial winter heating season. Europe is accelerating efforts to replace Russian gas with LNG, sending spot prices for the fuel surging around the world.

Nigeria: The Central Bank of Nigeria (CBN) reported that diaspora remittances through the ‘Naira 4 Dollar Scheme’ stood at $2.4bn in the first eight months of 2022. According to the CBN, the remittances are on course to surpass $2.9bn recorded in 2021. The ‘Naira 4 Dollar Scheme’ was started in 2021 as an attempt to incentivize the inflow of remittances from the diaspora in the country and help Nigeria improve its supply of forex, which is still low and is causing significant pressure on the country’s exchange rate. Rising remittance levels could improve dollar supply going forward.

Oil: Oil prices had their biggest jump in more than a month yesterday, with the front-month Brent crude contract rising back above the $105 per barrel level as supply concerns were once again the driving factor for the market. Traders continue to weigh the possibility of an OPEC+ supply cut being announced in September, while supply interruptions in Libya remain a high possibility. Another factor to consider is that liquidity levels in the market remain relatively thin, which continues to drive volatility and can lead to outsized moves, as we saw yesterday. Fundamentally, however, the market is looking a bit more balanced than what we have seen through most of 2022 so far. Supply levels are improving in general, and demand conditions are easing as global economies suffer a bit of a loss of momentum amid tightening monetary policy and fading fiscal stimulus effects. With this, the upside from here seems to be limited, barring any further supply disruptions or OPEC+ announcements on production cuts.

As August draws closer to an end, it is worth taking stock of the performance of Southern African currencies tracked by ETM against the USD. While the USD, as measured by the US Dollar Index, has traded at 20-year highs on the back of hawkish rhetoric from the Federal Reserve, some currencies in the Southern Africa FX complex have been fairly resilient. The Zambian kwacha and Mozambican metical have recorded gains, while the South African rand and Botswana pula have been on the back foot. 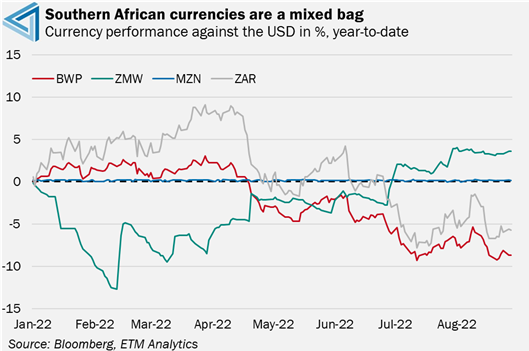 The kwacha has outperformed its peers and is also ranked the best performing African currency tracked on a month-to-date basis. The kwacha has firmed on the back of factors such as improved liquidity conditions due to central bank intervention in the FX market, a recovery in foreign portfolio flows into the economy, and improved sentiment towards Zambia as it nears final approval from the International Monetary Fund. Month-end tax obligations are set to see kwacha remain supported this week. Meanwhile, the Mozambican metical has been supported by the LNG price boom, which has resulted in a significantly improved macroeconomic and fiscal outlook for Mozambique. The energy crisis in Europe has sparked increased interest in Mozambique's LNG sector and has accelerated efforts to get the LNG platforms online as soon as possible. The increased investor interest, improved economic outlook and expectations for a marked jump in foreign currency inflows have put the country on an improved fiscal path. With the LNG sector set to provide a massive boost to foreign currency flows, the metical could remain supported in the near term.

While the rand has weakened along with the pula, it is worth noting that ETM's proprietary models suggest that the balance of risks is tilted in favour of a volatile recovery continuing into the end of the year. The ZAR Sentiment Indicator remains in positive territory, SA's carry attractiveness is high, commodity terms of trade are still positive, and the prospects for SA's economy are weak. Moreover, the ZAR remains undervalued on a nominal PPP-adjusted basis, and even more so against an extremely overbought USD.

The current, coordinated and powerful shift in monetary policy is undeniable. It also stands out as significant compared to previous phases of tightening. Never in the history of this data set which spans seventy years, has there been such a coordinated, global phase of tightening, where so many influential central banks have all chosen to hike rates by 50bp or more. It is therefore unprecedented and will have significant implications for economic business cycles. Such aggressive tightening on such a large scale threatens to tilt the global economy into recession, with the EZ and the UK in particular threatening to contract before year-end, which could extend for more than just two quarters. 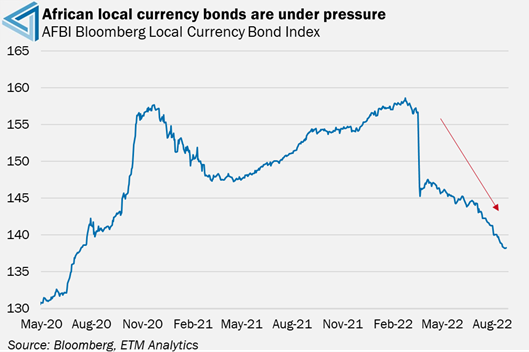 The hiking in developed market economies is spilling over into emerging markets that feel the need to keep up. Should they not, the risk of negative speculation against those currencies escalates and raises the risk of even greater price instability. While we have seen many African central banks tighten rates aggressively over the past year, inflation risks across the continent are acute, suggesting that more rate hikes are on the way.

With more rate hikes in the post and the global macroeconomic backdrop looking more fragile than ever, the bearish bias in local currency African bonds is likely to persist in the months ahead. Note that the Bloomberg Africa (ex. SA) Local Currency Bond Index has lost around 11.5% since the start of the year. It is worth mentioning that the losses have been amplified by a currency devaluation in Egypt in March and a sharp sell-off in the Ghanaian cedi. Nevertheless, even when considering these events, the losses are still substantial, and the risks are skewed in favour of more losses in the final months of 2022.

Macroeconomic: East Africa braces for another season of drought

East African countries are bracing for the fifth dry season, which is likely to intensify the current food crisis within the region. The world meteorological organization (WMO) has said that there is a higher chance of drier than average conditions across most parts of the region. The main countries that will likely be impacted are Ethiopia, Kenya and Somalia. 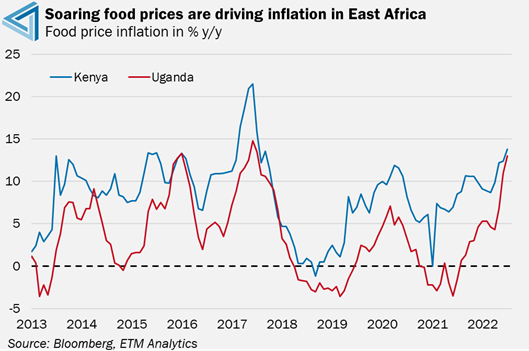 Globally we have seen the impact that droughts can have on crop production expectations, and concerns have been rising about whether food prices have actually reached their peak. With rains expected to be delayed and a huge amount of water needed in order to break the drought in East Africa, the expectations for declining food prices seem to be getting further away. Africa's food crisis is due to the double-edged sword of record high global food prices and the shortage of food on the continent.

Finally, going forward, the developed economies of the world will likely have to step in even further to assist with reducing the impacts of the current food crisis in Africa. The WHO has already started to assist by ensuring access to basic health services, providing treatment for severe malnutrition, and detecting, preventing and responding to disease outbreaks. However, the focus needs to also be on providing the countries with food and, in the long-term, developing technologies and trade agreements that will increase food availability and crop productivity.