The gold price is currently underpinned by virus fears this morning ahead of the important FOMC minutes, which will give further insight into the Fed’s thinking. The last policy update saw a decidedly more dovish Fed, which surprised markets given the previous meeting's hawkish turn. While the central bank maintained that the US economy still has ground to cover, the statement noted that FOMC members discussed the eventual tapering of asset purchases. However, it remains to be seen in how much detail tapering was discussed and at what point it may occur. The yellow metal is pivoting around the $1790.00/oz handle as we enter the EU session and we expect price action to be limited until we clear the FOMC minutes. In terms of the noble metals, both platinum and palladium have staged a recovery this morning.

Egypt: Data from the central bank of Egypt showed that remittances from Egyptians working abroad rose by 13% y/y to $28.5bn in the period from July 2020 to May 2021. Remittances increased in May 2021 by 45.2% y/y to about $2.6bn compared to about $1.8bn in May 2020. The rise in remittance flows will provide some support for the local currency.

Ethiopia: An official from Ethiopia's finance ministry has indicated that EximBank of China is withholding about $339mn in credit to the country amid concerns that disbursing additional credit may worsen the country's already growing debt and repayment problems. EximBank is reportedly withholding the money until restructuring negotiations called for by the Paris Club are finalised, and this will affect a total of 12 projects in the transportation and power sectors. Note that China is the biggest lateral lender to Ethiopia. It has financed huge state infrastructure projects, including factories and a railway from the capital of landlocked Ethiopia to the sea of Djibouti.

Kenya: Equity Group CEO James Mwangi forecast the bank’s loan-book to grow by around 30% this year, driven by business in its home market, the Democratic Republic of Congo and Tanzania. Mwangi added that most growth would come from Kenya, which has experienced the fastest recovery from the effects of the coronavirus pandemic of the six markets the lender operates in.

Uganda: State-run Uganda Coffee Development Authority yesterday reported that Uganda's July coffee exports rose 29% y/y, extending a rising streak into the sixth straight month this season. This as more newly planted coffee trees entered the production phase, boosting yield in Africa's top exporter. Coffee exports in July rose to 700,000 60-kilogram bags from the 543,617 bags exported in the same month last season. July's exports were the highest figure ever exported in a single month in more than a decade. Meanwhile, coffee exports in July brought the cumulative 10-month shipments of the season to 5.2mn bags, representing a 20% jump in the quantity of exports compared with the same period last year.

Zimbabwe: Data from Fidelity Printers and Refiners, the central bank unit's that's the sole authorised buyer of the metal in the country, Zimbabwe produced 12,779.29kg of gold during the January-July, compared with 12,017.85kg a year earlier. In July, deliveries doubled 2,824.6kg from 1,406.4kg a year earlier. Zimbabwe generates most of its foreign exchange earnings from mining, with major contributions from gold, platinum, and chrome. Zimbabwe is targeting 35 tons of gold in 2021 versus 27 tons in 2020.

Botswana: The government announced that it would resume its COVID-19 vaccination programme today with the aim of inoculating more than 2.3 million of its population. The country recently received batches of the Johnson & Johnson and AstraZeneca vaccine which will allow the authorities to continue with phase two of the project. "Although phase two category covers adults aged 30 to 54 age groups, the target for now will be those aged 45 years and above, for purposes of managing congestions at vaccination sites," a statement by the Permanent Secretary in the Health Ministry, Christopher Nyanga, said. "Alongside those in the Phase two category as indicated, COVID-19 vaccination will also be administered on some frontline workers including security personnel, those in the mining sector and the teaching fraternity, amongst others," the statement added. To date, more than 161 000 people have been vaccinated, while infections are at 142 380 with a death toll of 2043. The additional vaccines and equipment needed to fight the pandemic have resulted in the government budget ballooning.

The Zambian Kwacha has had a stellar quarter thus far amid a combination of positive external and idiosyncratic developments. On a quarter-to-date basis, the ZMW is up by over 18% and is Africa's best-performing currency against the USD. The ZMW has made significant gains in comparison to its African peers in Q3 thus far. For context, the next best-performing currency in Bloomberg's basket of 23 African currencies is the Angolan Kwanza which is only up by 1.23%. 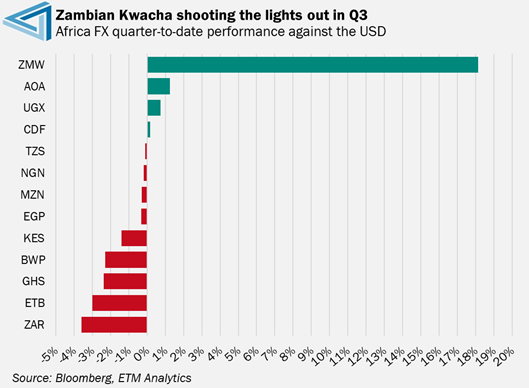 The bullish bias in the ZMW in Q3 so far has been attributed to changes in the actual supply of foreign exchange and expectations of further improvements in supply associated with the forthcoming IMF Special Drawing Rights (SDR) allocation, improved prospects of a formal Extended Credit Facility (ECF) programme with the IMF, as well as stronger copper prices which have also resulted in better foreign exchange flows from the mining industry. The Finance Ministry last week indicated that Zambia would receive about $1.3bn in SDR's from the IMF. This is expected to double the country's foreign exchange reserves, help build external resilience and support current relative stability in the foreign exchange market.

Further providing a tailwind to the ZMW bulls has been optimism that newly elected Hakainde Hichilema will promptly resolve the country's debt woes after a landslide election win. Hichilema has pledged to accelerate talks with the IMF to secure the funding needed to reduce the nation's unsustainable debt level, and many see the incoming president's policies as enabling the deal. Against this backdrop, risks for a bullish bias in the ZMW to persist in the near-to-medium term exist.

Local currency African bonds have posted an impressive rebound in recent months after suffering notable losses in the first quarter of 2021. Since its lows at the end of March, the AFMI Bloomberg African Bond Index ex SA has risen by more than 3%, putting the index back in the green on a year-to-date basis. At the time of writing, the African Bond Index had gained 0.70% on a year-to-date basis. The Africa Bond Index includes bonds from Egypt, Nigeria, Kenya, Namibia, Botswana, Ghana and Zambia. 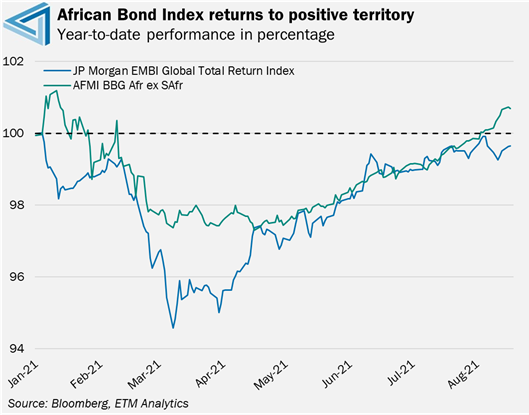 While emerging market bonds have also staged a solid recovery in recent months, the JP Morgan EMBI Global Total Return Index is still trading in the red on a year-to-date basis. It is worth noting that the EM Bond Index suffered more pronounced losses in the first three months of the year, with the EM Bond Index losing more than 5% in March.

While taper tantrum fears have intensified in recent weeks with the Federal Reserve expected to bring forward the timing of its policy normalisation, the resurgence in global COVID-19 infections and emergence of new faster-spreading coronavirus variants suggests that global monetary policy is likely to remain highly accommodative for a prolonged period. The ultra-accommodative policy stances of major central banks such as the Fed, ECB, BoE and BoJ is expected to underpin the hunt for yield.

This comes against the backdrop of soaring international commodity prices, which most African countries are heavily dependent on for foreign currency earnings and government revenue. The surge in commodity prices this year will be adding to the tailwinds for African bonds. Looking ahead, while there is still a significant degree of caution across global markets, given the attractive yields on offer in Africa relative to other frontier and emerging markets, we are likely to see African bonds outperform their emerging market peers in the months ahead.

Given fears of stagflation, investors eagerly awaited Nigeria’s July CPI release, which was released on Tuesday, to see if inflation pressures were starting to ease. Coming in slightly lower than consensus expectations, headline inflation in Nigeria decelerated from 17.8% y/y in June to a 5-month low of 17.4% y/y in July. On a month-on-month basis, however, consumer prices rose by 0.9% in July.

Details from the report showed that the deceleration in headline inflation was partly driven by a pullback in food prices, which has kept inflation in double-digit territory since 2016. For context, annual food price growth slowed from 21.8% in June to 21.0% in July. It is also worth noting that the deceleration in headline inflation came despite a weaker Naira amid the ongoing devaluation by the Central Bank of Nigeria. 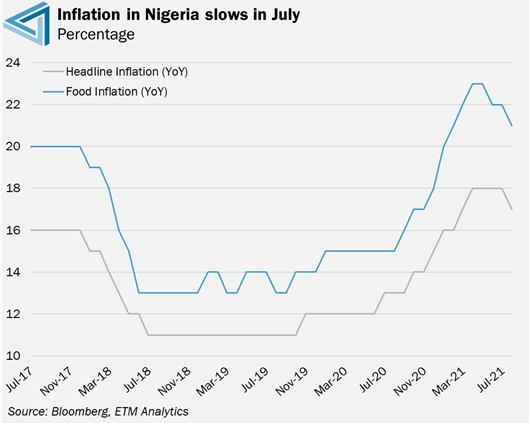 Looking ahead, the Central Bank of Nigeria forecasts that inflation will slow down to 13% by the end of this year and drop to single-digit by 2022, with the full implementation of its recent policies designed to boost different sectors of the economy and assuming that strict lockdowns will not resurface. While inflation slowed for a fourth straight month in July, it must be noted that CPI remains buoyed above the upper limit of the central bank’s inflation target range of 9%.

In terms of monetary policy, the recent deceleration in inflation will likely lead policymakers to leave rates on hold next month. We, however, remain of the view that the monetary policy stance of the Central Bank of Nigeria is imprudent. As is the case for any country facing structural growth impediments, loose monetary policy is not going to have the desired effect of reviving the economy in the absence of growth supportive reforms.

Therefore, we would like to see the government implement the necessary reforms while the central bank focuses on the inflation conundrum, which remains a major impediment to growth. Lastly, it is worth noting that Nigeria’s deep negative real interest rate will continue to detract from the attractiveness of domestic assets and will lead investors in search of carry to other African markets.