There is a lot unfolding in the US at the moment, but much of it is geopolitically driven. The US has held 7hr talks with China concerning developments in Ukraine and will have made its point clear that it will not look kindly on any assistance China offers Russia as it would undermine Western efforts to stop the war. On a separate issue, but interrelated, Iran has left the ball in America's court to make a decision on reopening negotiations on a fresh nuclear deal, although Russia has imposed demands that Iranian trade with Russia would not be affected by sanctions. It is a difficult geopolitical climate all around.

Although buoyant, the USD does appear to have run into some headwinds and may struggle to make further headway in an environment that could still see overall levels of risk aversion subside. All eyes will be on the war in Ukraine and, of course, the Fed's decision on interest rates.

Egypt: Planning Minister Hala al-Said yesterday said that Egypt is "not yet" in discussions with the International Monetary Fund over a new loan. The minister further described the IMF as "great support," adding "when something will happen, we will announce it." Note that last week, Reuters reports citing JP Morgan suggested that if the economic situation deteriorates, the Egyptian government may apply for another assistance package from the International Monetary Fund for balance of payments financing purposes. The Russia-Ukraine war has hit Egypt the hardest as it is considered the world's top wheat importer. Finance Minister Mohammed Maait has indicated that Egypt has a cushion of at least eight months of wheat supplies from reserves and the upcoming local harvest and that they are working to absorb economic shocks as a  result of the conflict.

Kenya: The Energy and Petroleum Regulatory Authority yesterday raised the gasoline price by 3.9%, the first rise in six months. The rise pushes the pump prices to a 10-year high. A litre of gasoline will retail at KES 134.72 per litre, while diesel prices increased by 4.5% to KES 11.5 per litre effective Tuesday. Meanwhile, Kerosene which is used in lighting and cooking, will remain unchanged for the fifth time. Note that gasoline and diesel retail prices were last this high in October 2018, when authorities chose not to tap the price stabilization fund. The higher fuel prices, in turn, are expected to inflate costs of food production, transport, electricity generation, and manufacturing and drive inflationary pressure in the economy.

Morocco: Local reports suggest that the government has agreed to subsidize the transport sector. The government agreed to grant a subsidy to the sector that was hard-hit by a surge in fuel prices in the import-dependent Kingdom. The government plans to announce within 15 days the amount of the subsidy and budget that will be allocated to it. Note in 2015, Morocco dismantled subsidies for most fuels, but they remain in place for cooking gas.

Nigeria: An oil pipeline run by Italian producer Eni has been hit by a blast, resulting in a reduction in exports and a crude oil spillage. The explosion hit its facility in Nembe in Bayelsa State and cut exports from its Brass terminal by 25,000 barrels per day (bpd). Eni did not give more details on the blast, but vandalism, sabotage, and theft from Nigeria's southern oilfields and pipelines are very common. The oil company said it was the second in a few days after an earlier incident on February 28 at its Obama flow station led to a production shortfall of 5,000 bpd.

Precious metals: The narrative for bullion remains unchanged at present. The yellow metal slipped further on Tuesday as investors grapple with the potential of a Fed rate hike this Wednesday and hopes of peace between Russia and Ukraine as both sides engaged in talks yesterday although no breakthrough was achieved. Discussions will resume today. The yellow metal is currently holding just north of the $1940.00/oz mark with investors still favouring the downside in the short term.

Base metals: Focus has shifted to China as soaring COVID-19 cases and the subsequent lockdown’s by Beijing have raised fears of a collapse in demand from the world’s second largest economy. Copper and aluminium had a difficult trading session with aluminium underperforming by a wide margin shedding some 4.81% on the day to close at $3319.50/tonne. Copper slipped below the $10000/tonne mark to close at $9935.00/tonne. This morning there was a slight push to the topside, but that has since faded, aluminium and copper are trading flat into the EU open. All eyes will be on the next round of Ukrainian/Russian talks which are to resume today and come as the EU states have agreed on a fourth package of sanctions against Russia.

Forex: The risk of a devaluation in the Egyptian Pound exists

While the Egyptian Pound remains remarkably resilient at the moment as the central bank continues to provide support for the currency, we are of the view that the EGP is at risk of a notable devaluation. The surge in import prices against the potential decline in Russian tourists have amplified the risks of a devaluation in the currency. Global commodity prices, particularly oil and food prices, have surged amid supply concerns relating to Russia’s invasion of Ukraine. 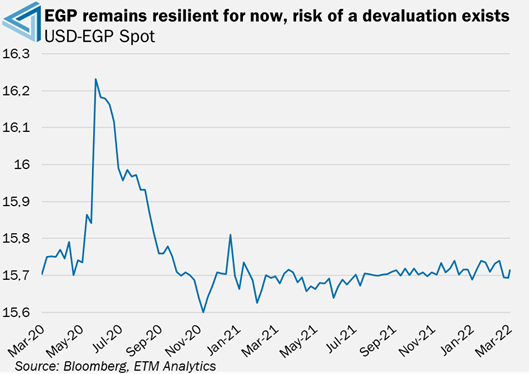 According to ETM’s valuation model, the EGP is overvalued by some 15%, adding to the notion that there is room for a devaluation in the currency. In addition, there is talk that a currency devaluation such as the one in 2014/15 when the central bank allowed the currency to depreciate by 5% may form part of the requirements of a new deal with the International Monetary Fund.

Moreover, Egypt’s terms of trade have dipped back below the 50 point neutral mark after spending the first few weeks in positive territory. Recall that Egypt continues to run a sizeable trade deficit, which will be compounding pressure on policymakers to allow for a devaluation in the EGP. If we do indeed witness a devaluation in the currency, we are likely to see policymakers allow the EGP to depreciate by 5%.

African Eurobonds have been exceptionally resilient to the deterioration in global conditions. While the combination of a hawkish pivot from major central banks, including the Federal Reserve and the Bank of England, together with the risk aversion related to the ongoing war in Ukraine, have hit emerging market dollar-denominated bonds hard, several Africa bonds are trading in positive territory in March.

Bloomberg data shows that of the nine developing nations which have seen their debt gain this month, notwithstanding the risk-off conditions, four are African countries. Africa is relatively sheltered from the crisis in Ukraine given its geographical location and the fact that many countries export some of the commodities that have surged as a result of supply concerns linked to Russia’s invasion of Ukraine. 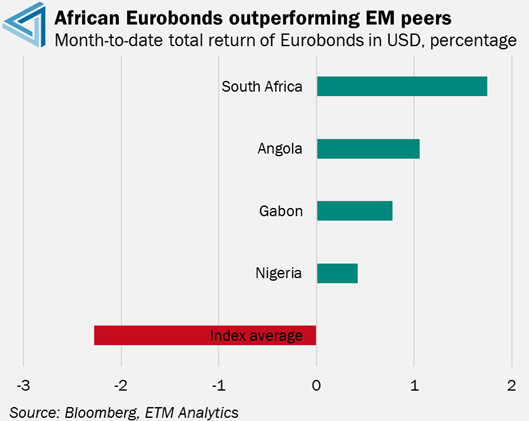 South Africa is the standout performer in the developing market space, with the country’s dollar-denominated bonds returning 1.75%  since the start of the month. This compares with an average loss of 2.30% for the 74 developing countries’ dollar bonds tracked by Bloomberg. South Africa has benefitted from the outflow of funds from Russia and Turkey.

Also on on the list of seven are Angola, Gabon and Nigeria, which are all benefitting from elevated oil prices. While oil prices have pulled back from their recent peaks, when Brent surged to almost $140/bbl, oil prices remain lofty and are supporting hard currency flows into the three countries as well as boosting their fiscal accounts.

While many other African dollar bonds are trading in the red this month amid expectations for tighter global monetary conditions with the likes of the Federal Reserve expected to kick off its rate hiking cycle on Wednesday, the marked increase in prices of non-oil commodities such as copper and palladium should continue to provide a degree of support for the Eurobonds of other African nations. Moreover, the elevated commodity prices should continue to underpin the resilience of African currencies through favourable terms of trade and improved fiscal revenues.

Macroeconomic: Oil prices fall back towards $100/bbl, providing some relief for importers

Interest rates hawks are watching developments in the commodity market closely, given the implications it has on inflation the world over. Inflation expectations have surged in recent weeks as international commodity prices legged higher on the back of supply fears related to the war between Russia and Ukraine. Although inflation expectations remain heightened, it is worth noting that there has been a marked retreat in oil prices in recent days, helping to ease inflation fears. 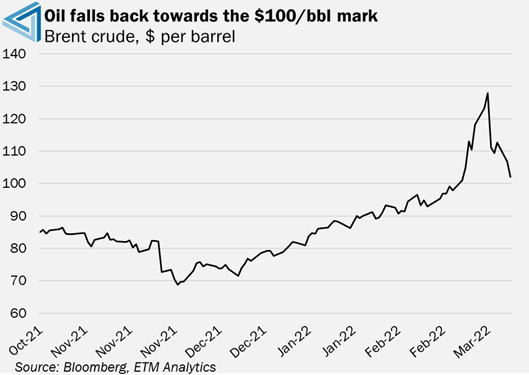 Oil's slide has continued this morning, with the front-month Brent contract probing the $100 per barrel mark, while WTI has slipped below triple-digits for the first time this month. This takes the market's losses to over 20% since it peaked in the first week of March, with headlines continuing to drive direction. Focus this morning has been on a slowing Chinese economy given the surge in COVID cases that is testing its zero-COVID policies. There has also been talk of a ceasefire between Russia and Ukraine, with progress on this front aiding market sentiment this morning.

Fundamentally, the market remains extremely tight. However, there have been signs that Russian exports have not been completely cut off from the global market. Russian oil company Surgutneftegas is still offering clients flexible financing in order to keep its crude flowing, while India has said that they are looking at ways to import cheap Russian crude in such a way that does not contravene the imposed sanctions on Russia. Keeping these flows alive will alleviate some of the pressures within the market, potentially keeping prices under a bit of pressure over the near term. However, a further escalation in the war remains a risk to this view and market jitters may see oil maintain a relatively wide trading range for now.