US Treasury yields rebounded yesterday, while German bund yields and those for gilts all saw similar movements. The ECB delivered an outsized rate hike of 75bp yesterday, an unprecedented move for the central bank, and suggested that more are to come. This hawkish message was matched by Fed Chair Powell, who remained tough on inflation and kept market pricing for another 75bp increase from the Fed this month alive. As a result of all of this, 2yr UST yields rose to 3.500%, while the 10yr benchmark climbed to 3.300%. The 10yr bund yield, meanwhile, broke through 1.700%, while the front-end of the curve ended the day around 1.315% when looking at the 2yr.

We are seeing a minor rebound for UST futures this morning ahead of the European open, but this is likely nothing more than general market machinations. Aussie and New Zealand bonds have slumped following yesterday’s losses for USTs and European bonds. Even so, we are seeing a positive start in terms of risk for the final session of the week, with the peak hawkishness of global central banks looking to be almost fully priced in now.

Egypt: Inflation data released yesterday bolstered bets that the Central Bank of Egypt will hike rates at its September 22 Monetary Policy Committee meeting. Recall that the CBE has left rates unchanged at its previous two meetings, stating that the deviations of consumer prices from its target are transitory and that the elevated pace of price increases would be temporarily tolerated. With inflation accelerating to a near 4-year high of 14.6% y/y in August from 13.6% y/y in July and pressure on the currency mounting, policymakers will find it hard to justify a decision to leave rates on hold later this month. The August inflation print underpinned the notion that price pressures in Egypt are broad-based with core inflation, which strips out volatile items such as food, accelerating by more than 1ppt to 16.7% y/y. Moreover, there is the risk of another devaluation in the currency as currency fundamentals continue to deteriorate. Note that this is the first MPC meeting under the leadership of acting Governor Hassan Abdalla.

Africa: According to a new strategy document, the Alliance for a Green Revolution in Africa (AGRA) plans to raise as much as $550mn to invest over the next five years in food production and agricultural reforms on the continent. AGRA is looking to reach 28mn farmers across 20 countries by 2027, with funding to get 30% of the country’s farmers to adopt sustainable farming and create 1mn jobs. Years of conflict and drought, exacerbated by the coronavirus pandemic and the war in Ukraine, have contributed to a rising hunger and food-insecurity crisis across the continent, particularly in East Africa and the Sahel region in the West. This has also added to inflationary pressures across countries in the region.

Mozambique: The African military mission fighting an Islamist insurgency in Mozambique is set to receive additional funding of EUR15mn from the EU. According to the EU, the additional funds will be used to acquire camp fortifications and storage containers, medical equipment, vehicles, boats, and other technological devices. The funds come in addition to EUR1.9mn already provided to the military mission as Islamist attacks threaten gas projects meant to reduce the bloc's reliance on Russian energy. Since the onset of the war in Ukraine, the EU has been seeking alternative sources of energy, and Mozambique has the third largest proven gas reserves in Africa.

Morocco: Against a backdrop of expectations of a higher grain harvest in 2023 than in 2022, the Moroccan government, in its budgetary plans for 2023-2025, forecasts growth to rise to 4.5% in 2023. The GDP forecast for next year is based on a grain harvest of 7.5MT, an FX rate of 9.8 dirhams/$, and butane gas prices of $700/ton. This year's grain harvest was 3.2m tons after a severe drought hit the key farming sector.

Tanzania: Headline inflation in Tanzania edged marginally higher in August, coming in at 4.6%y/y from 4.5% y/y in July. While marginal, the August print was the fastest pace of price growth in the economy since October 2017, and the fifth straight month inflation has risen. Food and non-alcoholic beverage inflation accelerated to 7.8% in August from 6.5% in July, while the annual inflation rate for all items without food and non-alcoholic beverages slowed to 3.4% from 3.8% in July. Despite the continued acceleration, inflation in Tanzania remains within the central bank's target range of 3-5%. That said, the risk to the inflation outlook is tilted to the upside amid still higher food, energy, and fertilizer prices

Uganda: The Bank of Uganda (BoU) has affirmed its commitment to restoring price stability even at the cost of economic growth. According to Charity Mugumya, a spokesperson from the central bank, "forcefully bringing inflation down likely requires a period of below-trend growth. This is the unfortunate cost of fighting inflation. But restoring price stability will bring far greater pain." Mugumya added that the bank projects inflation to remain in the 7-7.4% range this year with risks tilted to the upside amid a lagged impact of shilling depreciation, drought in parts of the country, and a complete pass-through of global inflationary pressures. Since June, the BoU has raised the benchmark interest rate by 250bp to rein in inflation at a decade high and has signalled its willingness to boost borrowing costs further if price growth isn't tempered.

Zambia: To help restore growth and macroeconomic stability, the World Bank sees Zambia as requiring a deep debt reduction of 45% in net present value terms. Meanwhile, the lender's International Development Association plans to disburse $750mn to Zambia this year, which would make it the highest-ever financing support for the country in a single calendar year. The package includes health and social protection operations and a $275mn budget support, which will be presented to the World Bank Board of Executive Directors for approval in October.

Forex: Nigerian naira remains near its weakest level on record

Although weakening pressure on the Nigerian naira eased yesterday, it continued to trade near the record low of NGN 436 per USD in the official market. The naira had fallen to its weakest level on record on the back of a continued fall in foreign exchange inflows and reserves, despite higher oil prices. Recall that Nigeria’s foreign exchange reserves fell by $193.4mn in August to $39.02bbn, extending a broader decline trend that has seen reserves decline in five out of the past eight months. Meanwhile, foreign exchange inflows into the country fell by 2.4% to $1.5bn in the three months to June from Q1 2022. 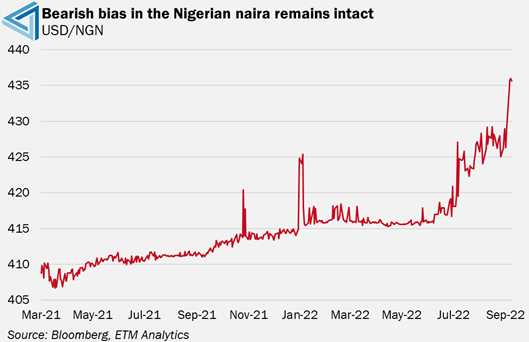 Falling foreign exchange inflows and reserves have pressured the Central Bank of Nigeria (CBN) and forced it to ration the sale of dollars, worsening the dollar scarcity problem in Nigeria. These rationing measures have forced individuals and firms to turn to the parallel market, driving the naira to record lows north of NGN 700 per dollar this year.

As dollar scarcity worsens and foreign exchange inflows decline, risks continue to build for the CBN to devalue its currency again to narrow the gap between the official and the parallel market rate. The naira is significantly overvalued on a real effective exchange rate basis suggesting there is room for further depreciation.

2022 has been a hard-hitting year for bond markets. Aggressive rate hikes, soaring inflation, fiscal degradation and prolonged risk-off conditions have driven bond yields across the world higher. According to Bloomberg data, bond yields are trading at or near the highest levels in a decade across most fixed-income asset classes. The most significant year-on-year increase has been in speculative grade EM sovereign debt. 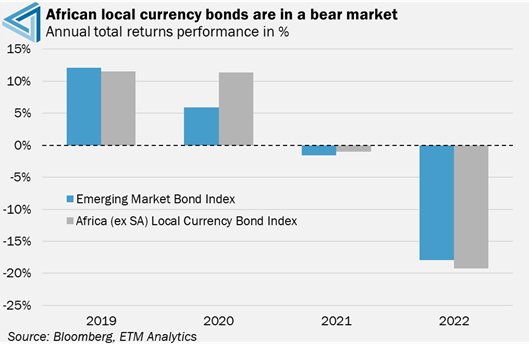 Local currency African bonds, in particular, have underperformed their emerging market counterparts this year. Specifically, the Africa (ex SA) Local Currency Total Returns Bond Index is down 19.3% since the start of the year and 26.1% below its 2021 peak. Emerging market bonds meanwhile have lost 17.93%  this year.

Currency depreciation has played a significant role in the sharp losses. Nineteen out of the twenty-two African countries tracked by ETM are trading in negative territory against the USD on a year-to-date basis. In some instances, the losses have been unprecedented, with the likes of the Ghanaian cedi losing almost 38% this year.

Going forward, while the USD is poised to remain strong in the near term, the greenback is significantly overvalued, suggesting that a correction lower in the currency is in the post. This would provide some much-needed reprieve for emerging market currencies down in the months ahead. Moreover, although we expect central banks to remain aggressive in their fight against inflation, we expect to see a broad-based shift in rhetoric from central banks in the first half of next year. Given our expectations for a correction lower in the USD and a shift in the central bank rhetoric as growth fears intensify, we are likely to see a notable recovery in local currency in African bonds next year.

After surging to unprecedented levels in 2021, global shipping costs have fallen sharply in recent weeks. Specifically, the Baltic Dry Index has collapsed to levels seen before the Covid-19 pandemic, reflecting a normalization in global shipping costs. This data reflects the expectation of weaker trade volumes which may be a signal of a recession. The other factor contributing to lower shipping costs is the fact that the supply of container ships has normalized as there are no longer disruptions to supply chains due to lockdowns. 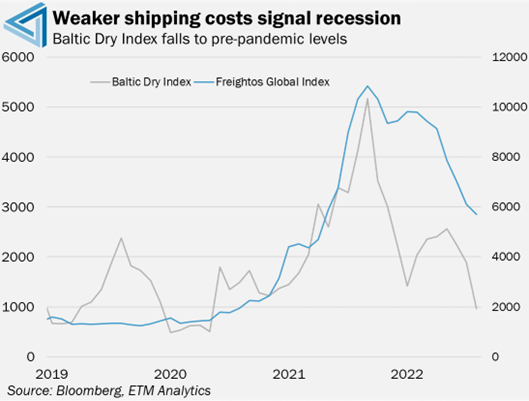 Freight rates have continued to fall as trade volumes slow due to shrinking demand for goods. While easing supply chain disruptions have helped drive shipping costs lower, much of the slowdown in container and vessel demand has been due to weaker cargo movement. This could be a sign of stagnation within global trade growth. While the World Trade Organisation had predicted that global trade would rise this year, uncertainty surrounding that forecast has increased due to the ongoing conflict in Ukraine, rising inflationary pressures, and expected monetary policy tightening in advanced economies

The decline in freight rates signals that trade is stagnating and that the world is heading into a recession. Unless a ceasefire is agreed to between Russia and Ukraine or China changes its zero-covid policy, it is unlikely that we will see freight rates rise sharply from current levels. High inflation and economic slowdowns are likely to weigh heavily on demand in the coming months. Expectations are for the Baltic dry index to fall by a further 20% to 30% in the coming months.