African bond yields are the highest in the world

The sell-off in global bonds persisted on Tuesday. Core bond yields trended higher yesterday as markets repriced for increased inflation risks as the global energy crisis intensifies. Adding to the headwinds for bonds was a sharp rebound in international oil prices, with Brent crude gaining 3.88% on the day to close back above the $100/bbl mark for the first time since the start of the month. While global growth concerns have intensified, inflation remains stubbornly high, with the World Economy Weighted Inflation Index sitting at 9.74%, up more than 400bps since the start of the year. Although we expect inflation pressures to ease next year as supply chains normalize and base effects take hold, major central banks are expected to remain aggressive in their fight against inflation, suggesting that the bearish bias across global bond markets is expected to persist in the near term, unless we see a material shift in rhetoric from the Fed on Friday.

Looking at the speculative currency market, the US dollar net speculative position stabilised and ticked marginally higher during the week ending 16 August, with this data covering the start of the dollar’s recent rebound. The slight improvement in the USD net bullish position was mostly a result of a further weakening of the Euro net position, which is now at its most bearish since March 2020, the start of the COVID-19 pandemic. There were also some notable moves for the Japanese Yen, Australian dollar and British pound positions, all of which weakened further. Offsetting these moves to some degree was a more bullish outlook on the Canadian dollar. The South African rand net position was lowered once again to a net bullish $0.17bn, keeping the recent trend intact. Given the recent rand depreciation, we could see a further deterioration of the speculative net position in the coming weeks.

Africa: China is set to cancel 23 interest-free loans to 17 African countries and redirect $10bn of its International Monetary Fund reserves to nations on the continent. According to a post on the Chinese foreign ministry’s website, Foreign Minister Wang Yi announced the cancellations in a meeting last week of the Forum on China-Africa Cooperation. However, the ministry’s post did not provide details on the value of the loans, which it said matured at the end of last year, nor did it state which countries owed the money. The announcement by Beijing comes amid growing criticism for its lending practices to poorer countries which accounts for almost 40% of the bilateral and private-creditor debt that the world’s poorest countries need to service this year, according to the World Bank.

Africa: Amid growing criticism of the slow speed of the restructuring processes for Chad, Ethiopia, and Zambia, the co-Chair of the Paris Club group of creditors yesterday called on for more progress on debt relief for poorer countries. According to the French official, bilateral lenders were “learning to work more efficiently.” The official also noted that it had taken two meetings under the G20 Common Framework debt restructuring process for Zambia’s official creditors to come to the agreement the IMF needs to sign off a funding programme, compared to five or six in the case of Chad.

Angola: Bank of Angola Governor Jose de Lima Massano was on the wires yesterday saying that the bank may consider cutting its benchmark rate as inflation slows and after its currency appreciated at the fastest rate in decades. According to Massano, “with price gains slowing, we expect interest rates to follow the same trend.” The Angola kwanza has gained almost 23% against the USD this year, making it the second best performing currency tracked by Bloomberg. Meanwhile, inflation is forecast to slow to below 18% by year-end from 21.4% in July. Massano also said that the bank will allow the kwanza to float freely and is not planning to intervene in the foreign exchange market.

Zambia: An official from the Finance Ministry has indicated that Zambia’s Eurobond bondholders have expressed their “displeasure” at not being included in official debt restructuring discussions, adding that they “feel like they are left behind.” While Zambia’s bilateral government creditors last month pledged to negotiate a restructuring, clearing the way for a potential $1.4bn IMF programme, the details of the relief offered by the bilateral and private creditors on its $17bn external debt still need to be agreed on. The official added that the committee of official sector creditors should have been formed sooner, but it did not have its first meeting till June, whereas an initial IMF staff-level agreement was reached in December.

South Africa: Labour dynamics in South Africa have improved slightly as the country’s unemployment rate dropped from 34.5% in Q1 2022 to 33.9% in Q2 2022. There were 648k jobs added in Q2, with most of them coming from the formal sector as businesses recover from the travel bans imposed on the country due to the Omicron variant. However, the country is not entirely out of the woods yet, as the number of people employed, which now stands at 15.6mn, is still 858k short of pre-COVID levels, highlighting the weak macroeconomic backdrop. Another factor that needs to be considered is the high youth unemployment at 71.9% under the expanded definition, which raises the risk of social unrest and political instability. From a policy front, there haven’t been substantive moves toward reforms that would drive a significant recovery in labour dynamics in the country. Therefore, consumer demand will likely remain weak, weighing on economic growth going forward while placing a strain on the country’s fiscus.

The latest data from the Central Bank of Egypt showed that remittances from Egyptians living and working abroad grew by 1.6% y/y to $31.9bn in the 2021/2022 financial year from $31.4bn recorded in the 2020/2021 FY. Remittances also increased by 3% in Q4 of the 2021/2022 FY (April-June 2022) to $8.3bn, up from $8.1bn in the corresponding quarter of the 2020/2021 FY. Along with tourism, the Suez Canal, and the export of goods, remittance inflows constitute one of Egypt’s key sources of foreign exchange revenue. The latter plays a crucial role in helping narrow the country’s chronic current account deficit, and the rise is likely to help alleviate some pressure on the current account gap. 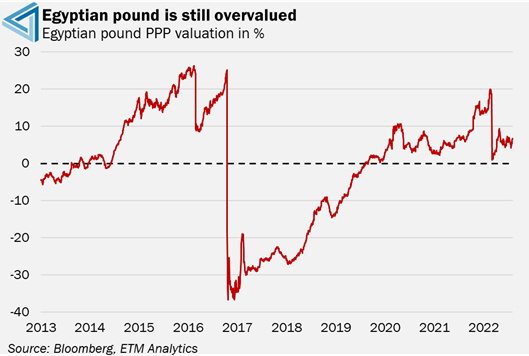 However, Egypt’s current account deficit remains sizeable, and risks exist that it might widen further amid still high import costs due to the war in Ukraine and tightening global financial conditions. The CBE devalued the Egyptian pound in March to boost the competitiveness of its exports, position itself for an International Monetary Fund loan, and received some investments from its Gulf partners. That has, however, not been enough to offset still elevated commodity prices and the flight of foreign direct investment.

Against this backdrop, there have been growing expectations of another currency devaluation to address this current account imbalance and allow Egypt to respond better to external shocks. The pound still remains slightly overvalued on a real effective exchange rate basis suggesting there is room for further depreciation.

Building on yesterday’s comment, the accompanying chart shows that African countries have amongst the highest yields in the world. Of the country sample tracked by ETM, seven of the ten highest local currency sovereign bond yields are from Africa. 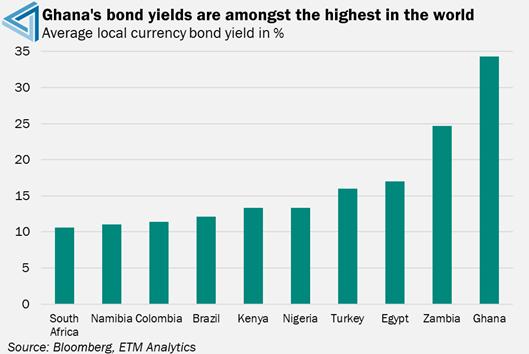 Zambia and Ghana have the highest average local currency bond yields, reflecting the significant fiscal risks associated with both countries against the backdrop of significantly tighter global financial conditions and an ongoing global inflation crisis.

Ghana tops out the list of the highest yields on offer, with average local currency bond yields sitting north of 34.0%. Yields across Ghana’s local currency bond curve have surged in recent months, with yields on the long end of the curve climbing by more than 1400bps since the start of the year. Significant currency weakness and soaring inflation have added to the upside impetus facing Ghanaian bond yields.

While Zambian bond yields are trading well below their 2021 peaks amid optimism surrounding an improved fiscal and macroeconomic outlook, Zambian local currency bond yields are still trading well above the rest of the country sample, with the country still effectively in default. Although African bonds come with a high-risk profile, they are still a very attractive option for an investor seeking significant returns.

Industrial metals have staged a meaningful recovery over the last few days due to low inventories and signs of improving demand in China. Iron ore and steel prices bounced higher after China’s latest rate cut, which boosted the outlook for China’s construction sector. The improved demand prospects ahead of peak season for construction steel have also helped to support iron ore and steel. 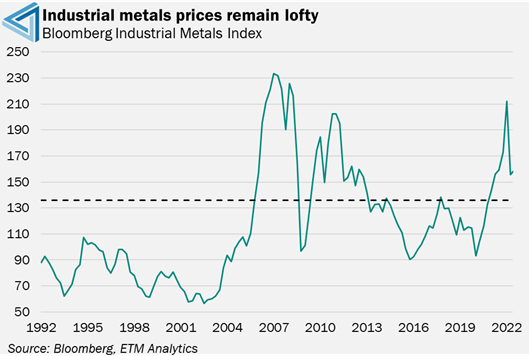 Inventories are low, and any more disruptions at smelters that are facing soaring energy prices will support industrial metals prices that would otherwise be under pressure from a stronger dollar. The main suppliers of base metals within Africa, such as Zambia and the Congo, will likely continue to benefit from high base metal prices.

Going forward, we expect industrial metals to remain relatively buoyant. Although industrial metal prices have pulled back from their recent peaks, they are still trading around 16% above their long-term average despite factors such as a high dollar and concerns about a global economic slowdown weighing on them.