Increasingly, investors are questioning the sustainability of the USD given how the Fed is actively looking through the cycle to a time when it can pause hiking or even consider rate cuts. The retreat in the USD that was evident on Friday has not been recovered. With the UK political situation stabilising, more risk is being dialled back out of financial markets, and the desire to rotate to the safety of the USD has dissipated, leaving the GBP-USD to trade around 1.1300 this morning. Furthermore, with the ECB talking of hiking at a time when the Fed is considering the pivot, even the EUR is on a firmer footing, trading just short of the 0.9900 mark. Through the remainder of the week, the focus will now turn to the US earnings reports for further guidance. PMI data released this week shows that the US economy is now slowing markedly and that the risk of recession is also increasing in the US, even if the labour market does not yet reflect this. Even the JPY has managed to claw back some lost ground and recovered from its weakest levels to trade at 148.80, although while the authorities plan on keeping interest rates low, the JPY’s resilience will be questioned, and the JPY will remain one of the world’s funding currencies.

Ghana: In a bid to protect importers from the continued slide in the Ghanaian cedi, Ghana’s Deputy Minister of Trade has indicated that the government plans to maintain a fixed currency exchange rate at the country’s ports for the next three months. According to the Deputy Minister, the US dollar will be kept at the same level as the Bank of Ghana’s interbank rate, and the measure was a “concession” to the Ghana Union of Traders Association, which was protesting against the significant drop recorded by the cedi. The fixed exchange rate is also meant to provide some level of stability for importers while also helping the government check inflation.

Egypt: The International Monetary Fund Director for the Middle East and Central Asia has indicated that a delegation from the lender will visit Egypt at the beginning of next month to resume talks over a new loan agreement. It is worth noting that Egypt has agreed with the IMF on the policies and restructuring of the new economic program, and a staff-level agreement may be reached soon.

Botswana: Yellow Card Financial Inc. has become the first company on the African continent to secure a license for trading crypto in Botswana. According to the Chief Executive Officer of the pan-African cryptocurrency exchange, the operating license may open up greater channels for expansion and access to payment, partners, banking, and clients across the continent. Yellow Card will target the unbanked population in Botswana. Note that more African countries are working to establish legislation to regulate the use of cryptocurrency and other digital assets in the financial markets. South Africa last week introduced rules to tighten oversight of the industry and to protect customers.

Botswana: Botswana’s Energy Minister has indicated that the government is seeking to secure funding partners for a $2.5bn plant to produce synthetic fuels from coal, a plan rekindled by the European energy crisis. Botswana has for almost a decade discussed tapping its extensive coal resources to produce fuels to displace costly imports. This would follow the example of South Africa, which developed coal-to-liquids technology through Sasol Ltd. Government efforts to realize the project have accelerated since Russia’s invasion of Ukraine.

Ghana and Ivory Coast: Ghana and Ivory Coast, who account for two-thirds of the global cocoa production, will reportedly boycott industry talks this week in a protest about poverty among West African farmers. According to officials from the two countries, Ghana and Ivory Coast will not participate at the World Cocoa Foundation Partnership meetings in Brussels this week. Note that World Cocoa Foundation is a group that represents 80% of the global market. The boycott is the latest escalation in a spat between growers of cocoa beans and a chocolate industry valued at more than $100bn a year, which is accused of perpetuating farmer poverty by negotiating down the price of beans despite a commitment to improving farmers’ pay.

South Africa: Through the past two sessions, the ZAR has weakened in its own right. While the rest of the majors are holding their ground vs the USD, the ZAR has slipped to levels back above 18.400/dlr and appears set to depreciate further. SA’s idiosyncratic risks are difficult to ignore. The upcoming budget is a case in point. There are many different demands on the country’s fiscal pool of resources, with some more important than others. Eskom will divert funds away from much-needed infrastructural upgrades, while the government’s inability to stave off a public sector strike reflects the difficulty in reigning in expenditure.

As Egypt seeks to move to a more flexible exchange rate system and away from years of keeping the pound’s value stable against the USD, the Central Bank of Egypt plans to develop a new indicator for its currency and add instruments to hedge against risks. Commenting on the matter, CBE Governor Hassan Abdalla said, “we will make an index for the Egyptian pound through a group of other currencies in addition to gold in order to change the culture that we are linked to the dollar.” Abdalla, however, did not provide any further details. It is worth noting that the near-fixing of the pound to the USD despite headwinds such as rising global interest rates and elevated food and energy costs has intensified the downward pressure on the currency, and an adjustment may be required. 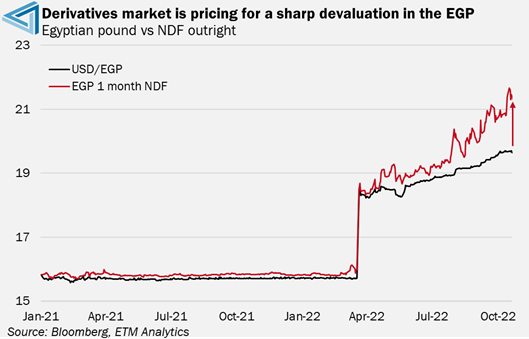 The comments by the acting Governor, in addition to reports last week that Egypt and the International Monetary Fund had agreed at an expert level about the make-up of a new economic program, are set to further underpin market expectations that Egypt will let its pound depreciate and allow for looser management of the exchange rate system. The IMF has long called for a flexible exchange rate system, which has been considered an important factor in the ongoing program talks.

The pound remains expensive against the dollar, and room for another devaluation exists. In the non-deliverables forward market, the one-month contract is pricing in depreciation of around 8%. Going forward, a weaker pound might further fuel inflation which is already at a multi-year high.

Continued USD strength, still elevated commodity prices, higher US rates, quantitative tightening from major central banks and fears over the war in Ukraine are making it significantly more challenging for African sovereigns to roll over their maturing debt or to fund their budget deficits. The combination of the factors mentioned above has added to fiscal pressures across the continent, which were already acute post the Covid-19 pandemic. 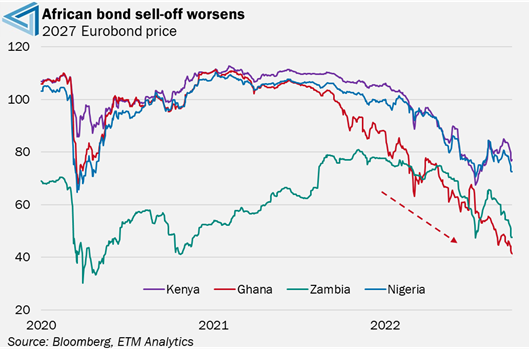 While the bearish bias in African bonds is expected to persist in the near term as major developed market central banks jack up interest rates to quell soaring inflation, the medium-term outlook is bullish. Given the extent of the sell-off this year, African bonds are trading at deep discounts. Moreover, we remain of the view that we will see a shift in central bank rhetoric in the months ahead as growth fears become a reality.

Macroeconomic: Commodity prices unlikely to return to pre-pandemic levels in the near-term

Looking at the sub-indices of the commodity index, energy has been the main component buoying the broader index this year. Since the start of the year, the energy sub-index is up 45% as oil and natural gas prices remain lofty. OPEC+ has recently cut its production, illustrating that the organization is committed to keeping oil prices elevated. Meanwhile, the gas crisis in Europe remains acute as supplies from Russia falter amid ongoing sanctions. This comes at a time when Europe is heading into winter, which historically has been associated with increased gas demand. 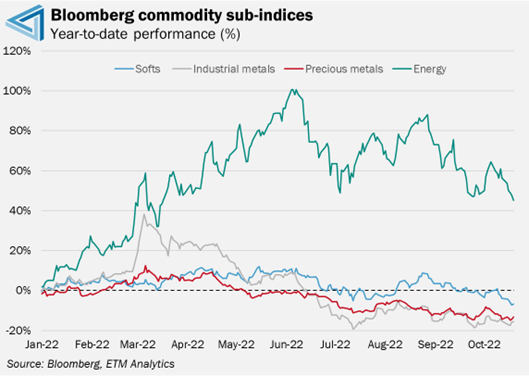 While the other major sub-indices are lower on a year-to-date basis, they remain buoyed well-above pre-pandemic levels. That said, it is worth noting that the moves this year have been notable, with the softs sub-index down more than 7% since the start of the year as global food prices correct lower. Meanwhile, the industrial and precious metals sub-indices are down 16% and 13%, respectively, reflecting concerns over the outlook for demand as global growth fears intensify.

Looking forward, while concerns over slowing global growth will likely continue to weigh on commodities, given the risks to the supply side of the equation, we are unlikely to see a reversal in commodity prices back to pre-pandemic levels within the next few months. Therefore countries that are net exports are likely to continue to benefit from elevated commodity prices.