African Bond Index slumps to a more than 2-year low

Although yesterday was a positive day for the USD, the focus now shifts to tomorrow’s FOMC decision and the guidance that Fed Chairman Powell will offer. The market is already priced for a 75bp hike so that decision will not impact market sentiment much. More important will be the guidance offered by the Fed and whether the pivot to less aggressive tightening or a pause is indeed in the offing. The ILO has warned that labour market conditions worldwide could deteriorate significantly through Q4. The Fed will be aware of the impact all this hiking will have on economic growth and the labour market and will likely argue that the bulk of the heavy lifting is now done. Whether it will have room to shrink its balance sheet in line with expectations remains to be seen because the full effects of the tightening will only manifest with a lag through the months and quarters ahead. For now, the USD is back on the front foot, but directional momentum is weak.

Out of Australia this morning, the RBA chose to lift rates by 25bp, reinforcing the steady tightening that continues worldwide. The Fed and the BoE will announce their decisions tomorrow and the day after, and more tightening should be expected. While the Fed is expected to lift rates by 75bp, and the BoE at least 50bp, what is less obvious is what guidance they will offer. Both countries are facing a very strong inflation episode that has not abated to the point where the central banks can declare victory.

Egypt: To boost food security in Egypt as part of the country’s drive to increase investment in food, water, and energy, the United Nations’ International Fund for Agricultural Development (IFAD) and partner organizations will provide $2bn worth of finance. The contribution will be channeled to the Egyptian government through loans until 2030 and will be part of the Nexus of Water, Food, and Energy. The funding will be targeted at small-scale, rural farmers. According to IFAD, NWFE is a program designed to accelerate the achievement of Egypt’s climate goals that will be announced at the COP27 international climate conference in November.

Angola: The Ministry of Finance has forecast the Angolan economy to grow by 3.4% next year and 2.9% in 2024. According to the ministry, growth is set to be driven by the non-oil sector. Meanwhile, oil production is projected to increase to 1.2mn barrels a day in 2023 from 1.1m this year. Angola is currently benefitting from higher-than-expected crude oil prices, which has lifted the country’s economic prospects and, in part, led to positive rating action from credit rating agencies such as Moody’s.

Nigeria: President Muhammadu Buhari has backed a plan to reissue high-value currency notes, barely a day after his finance minister questioned the move, providing the central bank with the support it needs to execute the controversial policy. Finance Minister Zainab Ahmed has argued that the move will weaken the monetary unit at a time of record inflation. According to a statement, President Buhari "is convinced that the nation will gain a lot by central bank's decision.” Since the announcement last week Wednesday, the naira has plunged to record lows in both the official and parallel markets as citizens rush to convert cash into dollars. The weakening of the currency is set to further drive inflationary pressures in Nigeria.

Tanzania: Tanzania is increasingly relying on gas-fired electricity plants as hydropower generation in the country has slumped due to a prolonged drought reducing water levels in rivers and reservoirs. According to state utility Tanzania Electric Supply Co., combined output from Tanzania’s four hydropower plants fell 86% to 34 megawatts. Tanzania and other countries in the Horn of Africa have experienced the worst drought in decades, triggering food shortages and a higher cost of living. Tanzania risks experiencing blackouts across the country should the rains fail to arrive. This would further weigh on an economy already expected to slow this year by the International Monetary Fund.

South Africa: The ZAR lost some ground yesterday and almost traded back towards 18.4000 before it encountered a fresh bout of resistance. Towards 18.4000 and above, there appear to be natural sellers that are keeping the pair capped. Moreover, there is unlikely to be any significant USD appreciation unless the Fed retains its hawkish guidance and gives the impression that there will be a lot more tightening ahead, something that is looking increasingly unlikely as the data out of the US gradually starts to show signs of reversing lower. The Housing market, in particular, appears to be correcting quite aggressively.

Zimbabwe: Trade data from the National Statistics Agency showed that Zimbabwe's trade deficit widened to $202mn in August from $178mn in July. The wider deficit resulted from a more pronounced decrease in outbound shipments than inbound shipments. Specifically, the value of total exports fell 10% to $493.6mn, while imports dropped 3.6% to $701.8mn.

The Egyptian pound extended its drop on Monday to cross the 24.00 per dollar mark for the first time on record, while speculation heightened as to where the currency will level out after the Central Bank of Egypt last week announced a shift to a more flexible exchange rate system. The CBE's move to let market forces (demand and supply) determine the pound's value helped Egypt secure a $3bn loan agreement with the International Monetary Fund. 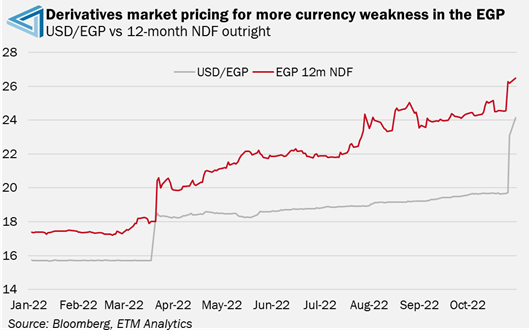 According to an IMF official, the move by the CBE to a flexible exchange rate system and the hiking of interest rates by 200bp is a step in the right direction. A more flexible exchange rate is seen as helping to unwind external imbalances to boost Egypt's competitiveness and attract foreign direct investment.

Despite the significant devaluation of the pound, traders in the derivatives markets continued to price in for further weakness. For context, the 12-month non-deliverable forward is pricing in depreciation of almost 10%. While the currency devaluation will help balance the country’s country’s external accounts, it is adding to inflationary pressures and driving up debt servicing costs of foreign currency debt.

It was a downbeat start to what promises to be a big week ahead for fixed-income markets. Ahead of the much-anticipated FOMC and Bank of England rate decisions later this week, bond markets took direction from the stronger-than-expected eurozone inflation data released on Monday. The robust inflation data fueled bets that the ECB will have to remain aggressive in its tightening in the months ahead. Core bond yields traded higher yesterday, with the 10yr US Treasury and Bund yields both up around 4bps on the day. 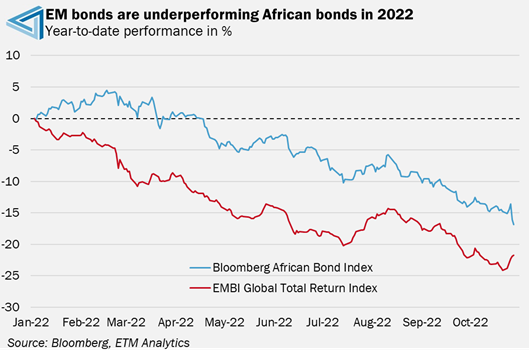 Tracking the broader bearish bias in core bonds, African bonds also came under selling pressure on Monday. This was reflected by the drop in the Bloomberg African Bond Index (local currency), which fell by just under 1% on the day to its lowest level in over two years. The Bloomberg African Bond Index tracks local currency bonds in Egypt, Nigeria, Namibia, Botswana, Ghana, Zambia, Morocco and Mauritius. Yesterday’s move brought the year-to-date losses in the index to 16.7%.

While the losses in African bonds have been significant this year, it is worth highlighting that the losses in emerging market local currency bonds have been more pronounced. For context, the Emerging Market Global Total Return Index has shed 21.8% since the start of the year, reaching levels last seen in 2016. Looking ahead, given the sensitivity of bond markets to monetary policy at the moment, the near-term performance of African and emerging market bonds will depend on the forward guidance provided by the FOMC on Wednesday evening.

The regional data card was headlined by CPI data out of Uganda and Kenya yesterday. The data showed that inflation in East Africa continues to run hot, with the headline figures for both Uganda and Kenya coming in higher than the previous month. Specifically, headline inflation in Kenya accelerated to 9.6% y/y in October from 9.2% y/y in September. The m/m figure remained unchanged in October at 0.9%, suggesting that inflation pressures remain robust. 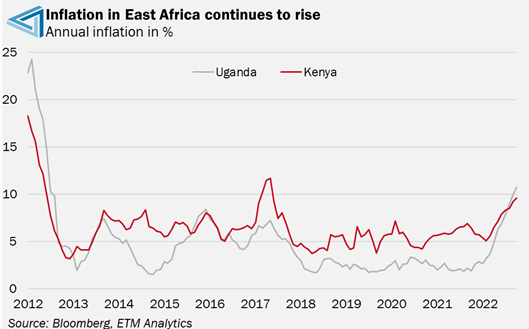 Meanwhile in Uganda, headline inflation accelerated to 10.7% y/y in October from 10.0% y/y in September. The October inflation print is the strongest reading since 2012 and is significantly higher than the five-year average of 3.2%. This underscores just how strong inflation in Uganda is at the moment.

Inflation in the region is being driven by a combination of elevated fuel and food prices and persistent currency weakness. Note that the Kenyan shilling and the Ugandan shilling have both depreciated by more than 6% against the USD on a year-to-date basis. With the bearish bias in the UGX and KES likely to persist in the near term and drought conditions expected to weigh on regional food production, inflation risks in East Africa remain skewed to the upside.