Africa to become a bigger player in the LNG space

US Treasury futures are on the defensive this morning following another surge in yields yesterday as global inflation concerns remain embedded. US yields surged to multi-year highs following higher-than-expected UK and Eurozone inflation, while rising oil prices added to the bleak outlook for price pressures going forward. A poor 20-year bond auction and corporate deal hedging added to the bearishness for US bonds, which saw the 2yr rise back above 4.55% while the 10yr yield makes its way towards 4.15%. Gilts, however, bucked the global trend and rallied yesterday despite the strong UK inflation print, while bund yields climbed and flattened out the curve as traders ramped up bets for ECB rate hikes.

Egypt: Qatar is reportedly in advanced talks to purchase around $2.5bn of state-held stakes in Egypt's biggest mobile network operator and other companies. Under the potential pact, which is expected to be finalized by the end of the year, Qatar Investment Authority would acquire 20% in Vodafone Egypt from Telecom Egypt Co. If the deal were to materialize it would be a boost for Egypt's economy which has grappled with the spillover effects of the war in Ukraine. Note that Gulf Arab states have already pledged upward of $20bn in deposits and investments, while Egypt is close to securing sorely needed International Monetary Fund assistance.

Nigeria: Finance Minister Zainab Ahmed has said that loans taken from the Central Bank of Nigeria to fund budget deficits amounting to NGN 20trn ($45.4bn) will be converted to bonds over a 40-year period at an interest rate of 9%. President Muhammadu Buhari has approved the plan to convert the loans. According to the head of the country's debt management office, "it is a one-time restructuring payable over 40 years with a moratorium." The timing of the conversion will be disclosed after the government seeks approval from the cabinet and lawmakers this year. This is the first time Nigeria has resorted to such a move, and it comes as pressure mounts on Nigeria's public finances.

Nigeria: Finance Minister Zainab Ahmed said that Nigeria has capped the debt service to revenue ratio at 50% in the medium term from 83% as of August. In the long term, Nigeria aims for 30%. Last week Nigeria said that it plans to manage the pressure coming from rising debt costs, inflation, and a stronger dollar by shifting loans from short-term to medium- and longer-terms. While Nigeria's overall debt pile is muted in relation to many of its African peers, fiscal risks in the country are elevated given its absurdly high debt servicing costs. According to International Monetary Fund data, Nigeria spent around 85.5% of its revenue servicing its debt in 2021, putting the country's debt servicing cost-to-revenue ratio among the highest in the world. The IMF has said that Nigeria may spend 100% of its revenue on debt servicing by 2026.

Uganda: President Yoweri Museveni, who is overseeing a $10bn oil development plan, has indicated that his government is committed to achieving net-zero carbon emissions by 2050. The comments by Museveni come as environmentalists criticize the East African Crude Oil Pipeline that's planned to transport the fuel from fields in western Uganda to Tanzania's coast for export. The critics argue that the conduit will risk endangered species' habitats and affect at least 118k people. In September, the European Union called on the government to suspend plans for the pipeline over similar concerns.

Uganda: The Ugandan banking association has launched a UGX 1trn ($262mn) special export facility to finance manufacturers and exporters to expand into regional markets. According to a statement from the lobby group, the regional export facility will lend at 12% for local-currency loans and 6% for other currencies for 3 to 5 years. The target destinations include Kenya, Rwanda, Burundi, South Sudan, and Tanzania. Locals, multinationals, individuals and small to medium enterprises qualify for access to the facility.

Oil: Oil markets are holding onto their gains from yesterday this morning, with prices shrugging off US President Biden’s announcements regarding the release of barrels from the US strategic reserves. Biden confirmed that the final 15mn barrels would be released and that more supplies could be tapped in the future. He stopped short, however, of announcing any curbs on US exports, which some were expecting. Helping prices shrug off this news was the data released by the EIA yesterday, which showed that nationwide crude inventories declined last week in the US. However, the bigger news was that fuel supplies are running very low, with the US only having enough diesel reserves to cover the next 25 days.

Tightening global financial conditions have pressured emerging and frontier market currencies this year. Moreover, the negative impact of the war in Ukraine has led to widening trade and current account deficits, which have added further downside pressure to currencies. Note that as the supply of dollars to the global financial system continues to slow, there is less hot money to be diverted to riskier emerging and frontier market assets, and they can experience significant volatility. The impact is more pronounced for countries whose fundamentals are weak. 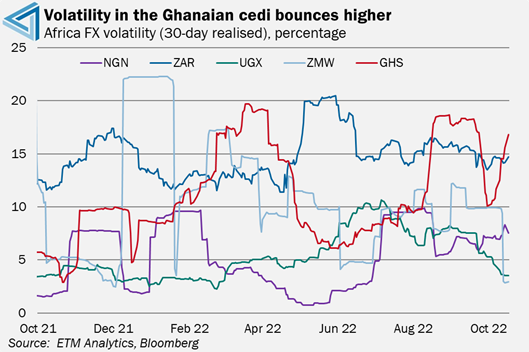 When looking at ETM’s 30-day realized volatility chart, it is evident that volatility in Ghanaian cedi has risen and made the currency the most volatile among those in the sample observed. Ghana’s deteriorating macroeconomic conditions, further exacerbated by tighter global financial conditions, have pressured the cedi. This has made the cedi the worst-performing African currency against the USD year-to-date. With Ghana’s fiscal picture uncertain amid slow progress in negotiating for a program with the International Monetary Fund, risks exist that cedi volatility may continue to rise in the near term.

In contrast, volatility in the Zambian kwacha has fallen significantly and the currency is now amongst the least volatile. The kwacha has bucked the broader weakening trend in the Africa FX basket this year to be the second-best performing African currency year-to-date. The kwacha has been supported partly by positive fiscal developments, which have triggered an improvement in foreign inflows. With Zambia’s macroeconomic outlook improving, we may see kwacha volatility remain subdued going forward.

Kenya remained in the spotlight yesterday after Transport Secretary-designate Kipchumba Murkomen said that the country plans to ask China for a longer repayment period on $5 billion of loans it used to build a new railway line. Murkomen said that debt servicing of the infrastructure loan is choking the economy, adding that if the government manages to extend the repayment on the loan, it will ease the burden and enable the government to use funds for other parts of the economy.

Murkomen said that the government is looking to renegotiate its Export-Import Bank of China loans, which mature in 15 to 20 years to 50 years. Kenya’s new rail line, which links Nairobi with the port of Mombasa, East Africa’s largest harbour, forms part of China’s Belt and Road Initiative and is Kenya’s largest infrastructure project in recent decades. 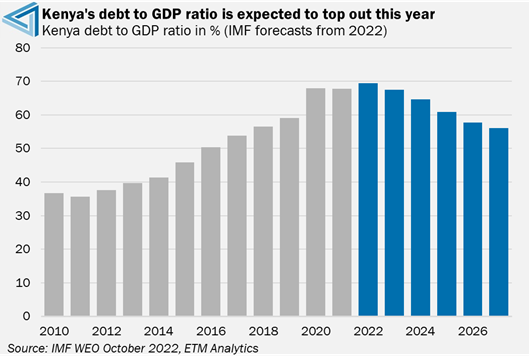 Murkomen said that the use of short-term capital to build long-term projects such as railways resulted in a funding mismatch, adding that the railway is yet to break even. In addition to the comments on the debt linked to the railway, the official noted that the government plans to float a road bond to clear an estimated KES 140bn of pending bills owed to contractors.

While Kenya’s infrastructure drive has made it a regional trade hub, the massive infrastructure spending has resulted in a marked increase in public debt. According to National Treasury, Kenya’s debt stood at KES 8.58trn at the end of June, which is equivalent to 67.8% of GDP. This compares a debt-to-GDP ratio of around 40% in 2012.

Russia’s invasion of Ukraine and the subsequent sanctions on Russia have resulted in a global energy crisis prices. Countries heavily dependent on Russian energy have been left scrambling for new sources of oil and gas. Europe, in particular, has been hit hard by the impact of the war between Russia and Ukraine. Europe’s energy crisis has cooled the efforts to lower the carbon intensity of LNG shipments as the priority shifts towards securing gas supplies over importing ‘greener’ energy. 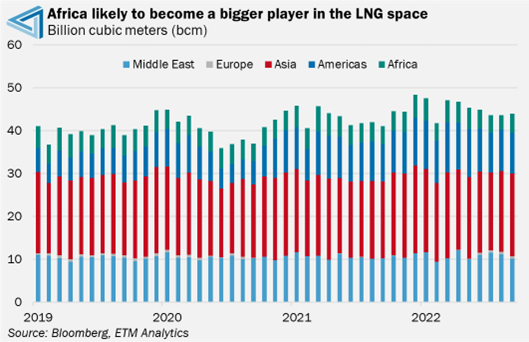 As a result of the developed world becoming less ‘sticky’ in terms of green sources of energy, investment interest in new gas projects has intensified. This is great news for African countries looking for investment in their LNG projects. Until this year, many developed nations were reluctant to invest in non-renewable energy projects, given the shift to greener energy sources. However, as the global energy crisis intensifies, import-reliant countries are being forced to secure new energy supplies.

Europe has been looking to Africa to fill its gas needs. The countries that are expected to benefit are Nigeria, Mozambique, Egypt, Tanzania, Angola, Uganda, Congo and Algeria. A number of gas projects are expected to come online in the coming years, and the number of these will likely continue to increase. However, the main challenge for investors is keeping assets safe in places like Nigeria, where militant violence and oil theft are common. Therefore, government focus needs to shift to making their countries as attractive as possible to increase investments and improve growth.