Global bond yields were broadly higher yesterday as risk sentiment received a boost from news that China would increase spending on infrastructure to boost its economy. This took US 10yr yields back to near the 3.00% handle, while 2yr yields managed to climb above this psychological level as Fedspeakers confirmed their support for another 75bp rate hike at the next FOMC meeting. German and UK bonds weakened in lockstep, but we saw some outperformance from Gilts following the resignation of UK PM Johnson yesterday, which has thrown more political uncertainty into the mix.

This morning we have seen a bit of a rebound for UST futures, while bonds in Asia, such as those in Australia, are playing catch-up to yesterday’s bond sell-off. JGB yields, meanwhile, are still fairly contained, and we don’t expect this to change anytime soon, given that the BoJ is buying record amounts of government bonds to cap benchmark yields at 0.25%. The day ahead now will see focus turn to the US jobs numbers, and after yesterday’s miss for jobless claims, we could see the data potentially surprise to the downside. This will support lower yields into the weekend as traders will price out more Fed rate hike risk owing to a cooling economy.

Africa: In an extensive interview with Bloomberg, Akinwumi Adesina, President of the African Development Bank, said that African countries require $424bn this year to help them cope with the devastation caused by the coronavirus pandemic. Adesina was quoted as saying, “We should not minimize the impact of the coronavirus pandemic on African economies. We have to expand the fiscal space for African countries. Secondly, we must tackle the whole issue of debt. You cannot run up a hill while carrying a backpack of sand on your back.” On the International Monetary Fund’s reserves, Adesina acknowledged that while special drawing rights have helped, “Africa still needs to have $150bn channelled to it.” Regarding the continent’s debt burden Adesina said, “A lot of the debt in Africa is infrastructure-related debt, but if we are able to get a sustainable way to do this, that would be much better. That sustainable way is that the private sector has to have a role, it shouldn’t just fall on the government.”

Egypt: Data from CAPMAS showed that Egypt’s trade deficit narrowed by more than half in April. Specifically, the trade deficit dropped by 53% y/y to $1.7bn amid surging exports and declining imports. Outbound shipments rose by 54.2% y/y to $4.94bn in April, driven by year-on-year exports growth in refined petroleum products, crude oil, ready-made garments, and fertilizers. Meanwhile, imports fell by 2.7% y/y to $6.64bn. While trade account reading improved in April, Egypt continues to run a trade deficit which will detract from the current account balance and, by extension, the currency.

Nigeria: Shell has warned that crude oil theft in Nigeria poses an existential threat to the country’s oil industry and that this has resulted in the closure of two of its main pipelines. The managing director of the Shell Petroleum Development Company of Nigeria Limited and Shell Companies in Nigeria further said that theft was one of the reasons Nigeria cannot meet its OPEC quota of 1.8mn barrels per day. Due to theft and low production levels, Nigeria has been unable to capitalize on the higher than normal global prices, depriving the country of much-needed foreign exchange income. Last week Nigeria’s oil regulator reported that the country had lost $1bn in revenue in the first quarter of the year due to oil theft.

Zambia: Zambia’s Markit/Stanbic bank PMI was little-changed in June, coming at 49.9 from 49.8 in the month prior. This signalled broadly stable business conditions over the course of the month. Survey results from Markit showed that while price pressures and money shortages acted to dampen demand at some companies, leading to output and new orders to decrease, others reported having been able to secure new customers. There were signs of inflationary pressures easing while firms continued to expand their employment levels and purchasing activity. Meanwhile, hopes that economic conditions will remain stable helped to support new order growth and contributed to optimism about the year ahead outlook for business activity. That said, sentiment dipped slightly from May. While business conditions remained broadly stable in June, the recent fuel price hikes could impact business conditions going forward.

Zambia: The Ministry of Finance and National Planning yesterday reported that Zambia’s total public debt (public debt and publicly guaranteed debt) stood at $25.98bn at the end of March. Meanwhile, central government external debt was $13.2bn and guaranteed and non-guaranteed state-owned enterprise loans amounted to $1.5bn and $117.18mn, respectively. The domestic debt burden amounted to $11.15bn. The increase in the debt stock was attributed to disbursements from multilateral creditors. Finally, external debt-service arrears were $2.53bn by the end of March. Meanwhile, Zambia has tabled new sovereign debt law following the recent default on loans. The proposed legislation submitted to lawmakers provides for the raising of loans and the approval thereof by the national assembly. Moreover, the law also calls for the establishment of sinking funds and a debt management office.

Forex: Nigerian naira plunges to a fresh low in the parallel market, widening the gap between the official rate

The Nigeria naira weakened to a record low of NGN617 per dollar in the parallel market yesterday on the back of persisting dollar scarcity. Pressure on foreign exchange reserves, down by over 3% since the beginning of the year despite higher-than-normal oil prices, has forced the Central Bank of Nigeria  (CBN) to cut down on dollar sales, creating a shortage of the currency in the market. This has forced individuals and firms to turn to the parallel market, driving the naira to record lows. 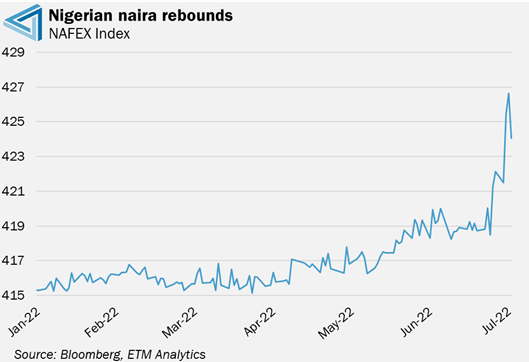 The naira plunge in the parallel market has widened the spread with the official rate to around 46%, following yesterday’s official rate close of NGN424.05 per dollar. While the CBN has devalued the naira three times in the last two years, amid demand pressure worsening the scarcity of the dollar, it still has a backlog of around $1.7bn in unmet dollar demand, according to the IMF.

Overall, risks for another naira devaluation in the near term are mounting as dollar scarcity heightens. It is worth noting that naira depreciation to almost 509 per dollar in the next 12 months is currently being priced in by the non-deliverable forwards market.

The aggressive sell-off over the past 10 months, driven largely by the hawkish pivot by major central banks, has resulted in a marked improvement in the valuations of local currency emerging market bonds. As highlighted in yesterday’s note, emerging market bonds (local and hard currency) have lost almost 20% since the start of the year, putting them among the worst-performing asset classes in 2022. 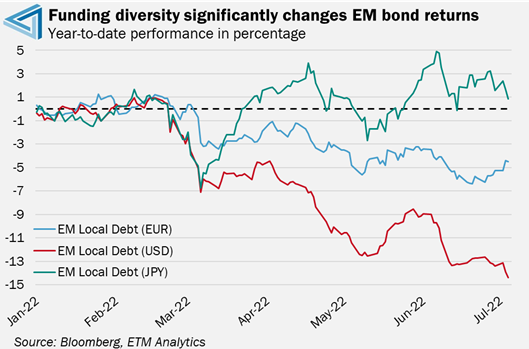 While global monetary conditions are expected to tighten further in the months ahead as major central banks look to rein in inflation and inflation expectations, which is bearish for local currency emerging market bonds, it will likely further bolster the attractiveness of emerging market bonds as yields continue to rise and prices fall.

It is also worth mentioning that while the USD strength has compounded the losses in local currency bonds, our propriety models suggest that there is room for a meaningful correction in the dollar. This was unpacked in yesterday’s FX comment. Should the USD correct lower, prompting a recovery in emerging market currencies later in the year, it would add to the appeal and returns of emerging market bonds. Although emerging market bond returns have been dismal in dollar terms, it must be noted that the year-to-date performance in emerging market local government debt is significantly better when the returns are funded in yen or euro. Investors with the flexibility to diversify their funding through yen or euro are expected to outperform as long as the dollar strength persists.

Coming as music to the ears of policymakers, consumer price growth in Egypt decelerated in June. Annual inflation slowed to 13.2% y/y in June from 13.5% y/y in May. On a month-on-month basis, consumer prices declined by -0.1% vs an expansion of 1.1% in May. This is the first time since December that the m/m figure has fallen below zero. The m/m figure indicates that inflation may be peaking. 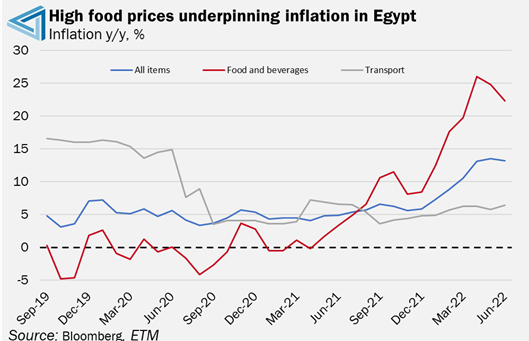 Inflation within Egypt has been on an upward path since the war between Russia and Ukraine broke out. Russia and Ukraine contribute around 30% of global grain exports and a significant portion of Egypt’s grain imports. The war in Ukraine partly explains the surge in food prices this year, which has been the main driver of headline inflation in Egypt. Food is the single largest contributor to the inflation basket. Food prices were up 22.% compared to year-ago levels in June.

Currency weakness is also contributing to inflation in Egypt, with the pound almost 20% weaker in June 2022 compared to levels seen in the comparable month of 2021. The weakness in the local unit is primarily due to the central bank’s decision to depreciate the currency in March this year.

Looking ahead, while it is encouraging that headline inflation in Egypt decelerated in June, consumer price growth remains robust, with inflation still buoyed in double-digit territory. While inflation risks are acute, the Central Bank of Egypt kept interest rates unchanged in June after making its biggest hike in half a decade in May. Although the CBE paused on its tightening in June, we expect the CBE to hike rates further in the coming months. Additional rate hikes would also boost the EGP’s carry attractiveness and the appeal of Egyptian bonds.