Africa is pivotal in the global transition to gas

Some hawkish commentary from Fed member Bullard yesterday pressured the UST market, with yields rising across the curve on the day. Moves were concentrated at the front-end of the curve after Bullard said that the US central bank should raise rates to at least 5.00% or 5.25%, setting the tone for other officials to signal that more rate hikes are likely to come. With this, 2yr yields jumped around 10bp on the session while longer-dated yields saw jumps of around 5bp to 7bp, further inverting the curve with the 2v10 spread now approaching the -70bp level. It does appear that the majority of Fed members still see a fairly hawkish path ahead which will keep the front end of the curve elevated and, in turn, may keep risk asset rallies from gaining too much traction in the near term.

Traders also continued to up their wagers on ECB and BoE rate hikes, pressuring bunds and gilts yesterday. Gilts were the underperformers on the day as additional topside pressure stemmed from announcements from the DMO that it will lift the share of short and medium-dated debt to be sold this year, while anticipating a deluge of debt sales next year.

Africa: To help Africa adapt to the changing climate, the European Union and four member countries have provided a $1bn grant. According to the EU climate policy chief, the four members are France, Germany, the Netherlands, and Denmark. The official also indicated that the EU will provide EUR 60mn for loss and damages and will present ideas on how to take loss and damage negotiations going forward. The grant will provide a significant boost for the continent, which urgently requires investment in adaptation infrastructure, such as flood prevention systems, to fend off disasters that wreak havoc on communities and ruin economies.

Africa: The International Finance Corp, Access Bank, and other development institutions are in talks to launch a $1bn facility for small businesses in Africa starting next year. According to the executive director of African subsidiaries for Access Bank, the bank will disburse the facility over five years. The FMO, the Dutch development bank, and Afrexim Bank have also committed to funding the program. While SMEs account for about 95% of all businesses on the continent, they face significant constraints raising finance and often at a higher cost. This new facility intends to partly bridge that gap.

Ethiopia: Ethiopian Electric Power has started exporting electricity to Kenya. The $500mn line has capacity to transmit 2,000 megawatts of electricity, potentially earning Ethiopia as much as $100mn annually. According to a statement from the company, “Ethiopia has completed activities to ensure uninterrupted and reliable transmission of power, and it is expected that similar activities will be implemented by the Kenyan side.” The Grand Ethiopian Renaissance Dam, a giant hydro-power dam on a Nile River tributary, began generating electricity earlier this year, a project it sees as key to economic development but which has stirred tensions with downstream neighbors Egypt and Sudan. The dam will be able to generate 5,150 megawatts of electricity once completed in 2024, and Ethiopia has signed supply agreements with Kenya, Sudan, Djibouti, Somaliland, Tanzania, and South Sudan.

Kenya: On the back of a drought, lower production, and post-harvest losses brought about by poor handling, Kenya is projected to lose at least KES 20bn in horticulture earnings this year. According to the Head of Horticulture Directorate, earnings this year could drop to KES 130bn compared to last year when Kenya recorded KES 150bn. The lower projection is set to compound Kenya’s foreign currency challenges, given earnings from the horticulture sector are a significant source of foreign exchange.

Nigeria: Nigeria is set to offer 10-year Sukuk bonds for up to NGN 100bn on November 21. According to the Head of the Debt Management Office, Nigeria will use the proceeds to finance the construction and rehabilitation of roads. The offer closes on November 29. Bidding interest will be watched closely by other African nations that are in need of raising funds offshore.

Uganda: The Uganda Coffee Development Authority has said that Uganda is set to select an international partner to invest in the government-backed soluble coffee plant. According to the state-run UCDA, five international companies are interested in forming ventures with local entities. UCDA and Uganda Development Corp are set to provide seed capital for the venture. The project is part of Uganda’s drive to boost earnings from coffee. Africa’s second-biggest grower of coffee also aims to boost output to 20mn bags by 2030, from the projected production of 9mn bags a year through September.

Senegal: After a staff mission to Senegal, the International Monetary Fund said that country had made significant progress in implementing structural reforms, but they had come at a slower pace than anticipated. According to the lender, the performance of the reform program was “broadly satisfactory,” and “the economy should rebound in 2023 with a strong pickup in growth to 8.3% on the back of temporary boost from oil and gas production and absent further escalation in the Ukraine war.” Meanwhile, inflation is expected to recede due to a strong harvest and lower international commodity prices.

Along with tourism, the Suez Canal, and the export of goods, remittance inflows constitute one of Egypt’s key sources of foreign exchange revenue and play a crucial role in helping narrow the country’s chronic current account deficit. With this in mind, it is worth looking at the latest remittance inflows data from the Central Bank of Egypt. The data showed that remittances from Egyptians living and working abroad fell by 2.34% y/y during the period January-August 2022 to $20.9bn from $21.4bn in the corresponding period of 2021. In August alone, remittance inflows edged lower to $2.2bn from $2.4bn in the month prior. 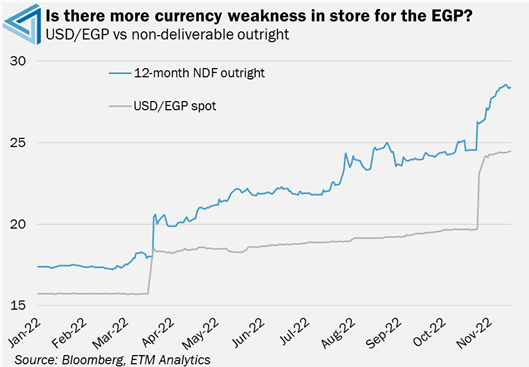 Although remittance inflows fell in August, the decline was marginal, and remittance inflows are expected to contribute to helping ease the pressure on the current account this year. That said, the deficit remains sizeable, and Egypt has a huge funding gap. Finance Minister Mohammed Maait recently said the external funding gap is $16bn over roughly four years.

Egypt has secured funding from the IMF and is stepping up efforts to broaden its bond issuance to improve access to capital markets next year. While this is positive, Egypt also needs to rely more on stable funding sources than portfolio investments and allow for greater currency flexibility to address the funding gap. The need for greater currency flexibility despite the recent devaluation has resulted in the derivatives market pricing for further pound weakness in the derivatives market.

The focus this morning is centred on East Africa and the relative performance of the primary bond markets in the region. For this study, we looked at the S&P Sovereign Bond Total Return indices to compare the relative performance of bonds in Tanzania, Kenya and Uganda. The total return indices take into account interest and cash flows from the bonds, including coupon payments, redemptions and repurchases. 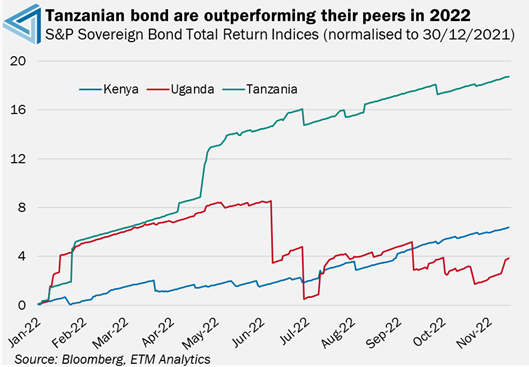 For this piece, we have normalised the indices to the end of last year to gauge the relative performance of the three bond markets so far this year. As can be seen in the adjacent chart, on a total returns basis, Tanzanian bonds have significantly outperformed Kenyan and Ugandan bonds this year. Inflation and monetary policy dynamics in the three countries go a long way in explaining the outperformance of Tanzanian bonds.

Macroeconomic: Africa is pivotal in the global transition to gas

Africa is starting to play a more significant role in the global gas space. Around 40% of global new gas discoveries in the last decade have been found in Africa. Following the outbreak of the Russia-Ukraine war, gas supply issues have intensified, resulting in an energy crisis in Europe. The energy crisis has bolstered interest in developing gas supply chains in other parts of the world, with Africa being one of the focal points. 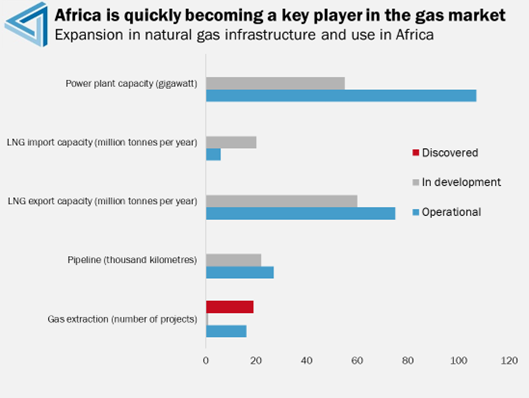 Not only is Europe looking to Africa to fill its gas supply gap that Russia has left, but there is a drive to replace coal with natural gas in order to reduce greenhouse gases. Given its untapped reserves, Africa will play a key role in the global transition. Note that around 40% of global new gas discoveries in the last decade have been found in Africa.

Africa has been a big talking point at COP27, which concludes today, as the world looks to lower its carbon emissions. There has been much debate on whether African nations should receive financial support to produce, use and export natural gas as part of a clean energy transition. Many climate campaigners do not believe that African countries should be allowed to use gas. Africa's argument is that gas emits less climate-heating carbon dioxide than coal and oil when burned. In recent years, we have seen some significant investments into gas projects in Africa, such as TotalEnergies’ $20bn project in Northern Mozambique.