The USD is surging at the moment, with investors focusing on the inflation data earlier this week that surprised to the topside. Investors are positioning for the possibility that the Fed may be forced to bring forward the timing of rate hikes once the taper is completed and that the current inflation episode may extend a little longer than anticipated. For now, it is supporting the USD and heading into the weekend, a significant reversal is unlikely, but focus will shift to real economy data in the coming weeks to see what resilience the US economy enjoys. Today the focus will shift to latest Michigan consumer confidence data.

After rebounding in the first half of the year on the back of optimism surrounding the vaccine rollout and reopening of the economy, consumer confidence in the US has cratered in the second half of the year. Consumer confidence has plunged back to levels seen during the peak of the COVID-19 outbreak on the back of higher rates of inflation and receding confidence in government economic policies. Going forward, while we expect the recovery in the US economy to persist in the foreseeable future, given all the uncertainty at the moment against the backdrop of mounting inflation expectations, we are likely to see consumer sentiment remain anchored in months to come.

In the commodity space, the price of copper finished yesterday’s session in the green with the 3m LME contract adding 1.05% over Thursday’s trading day. This morning we have the red metal trading marginally lower testing the $9600.00/tonne level as we head into the EU open. The downside is however capped by tight inventory levels in exchange warehouses across the major centres.

Angola: Following a trip to Angola Vice-President for the World Bank for the Eastern and Southern Africa Region, Hafez Ghanem announced a new disbursement of $1.5bn to the country. According to Ghanem, the grant available from January next year will benefit the country's water, agriculture, and other infrastructure sectors. Regarding the pandemic, Ghanem said that the World Bank will continue to provide full support to Angola to acquire vaccines for its population. The World Bank had been in the country since Monday to assess and strengthen the partnership of the Bretton Woods institutions with the government of Angola.

Ethiopia: Following the ratings downgrade from S&P, the third one since January, Finance Minister Eyob Tekalign said that Ethiopia will make the $33mn Eurobond payment due December 11. Without providing any further details, Tekalign was quoted as saying Ethiopia "will pay the value." Note that S&P lowered Ethiopia's rating deeper into junk to CCC, citing a risk to debt payments as the civil and geopolitical conflict in the country worsens. The agency added that the outlook is negative.

Kenya: Data from the Kenya National Bureau of Statistics showed that black tea earnings in the world's biggest export of the commodity fell to KES 97bn in the eight months through August from KES 89.2bn a year earlier. Leaf output slipped 1.9% to 386,830 tons during the period. Moreover, income from horticulture fell by 3% to KES 101.7bn. With Kenya being the world's biggest exporter of black tea, a decline in export earnings could, to some extent, weigh on its foreign income and further compound the dollar liquidity challenges that have weighed on the Kenyan Shilling.

Rwanda: The central bank of Rwanda yesterday kept its benchmark interest rate unchanged at 4.5%. According to the monetary policy statement, policymakers decided to maintain the current monetary policy stance as it is adequate to support the economic recovery while bringing inflation up to the medium-term objective of 5.0%. Headline inflation is projected at 0.7% in 2021 and 5.4% in 2022, mainly due to the increase in imported costs and international commodity price in Q4. Meanwhile, policymakers expect positive economic growth in Q3.

South Africa: Manufacturing production in September slowed to 1.3% y/y from an upwardly revised reading of 1.9% y/y (prior: 1.8% y/y) in August. The decline, however, surpassed consensus expectations of contraction of -1.3% y/y. On a month-on-month basis, output fell to 3.8% from 7.1% in August.  On a 3-month seasonally adjusted basis, the sector contracted by -3.9%, suggesting that the manufacturing sector detracted from GDP in the third quarter. While the further reopening of the economy will provide support to the sector in the coming months, significant risks to the outlook remain given persisting structural constraints that require deep-rooted reforms for sustainable economic development. Forward-looking indicators such as the Absa manufacturing PMI suggest the sector, although still expanding, remains fragile and poses further downside risks to economic growth in the coming quarters should momentum start to slow.

Tanzania: M3 money supply in Tanzania surged to 12.7% y/y in September from 9.9% y/y in the month prior. This was the fastest pace of growth since April 2016 and is reflective of the ongoing accommodative monetary policy stance of the central bank. Moreover, the September print compares with a rate of 6.5% y/y in the corresponding month of 2020. While monetary conditions are relatively loose, Tanzania's inflation remains within the 3%-5% central bank target range.

The Zambian Kwacha (ZMW) has come under some notable pressure since its two—month world-beating rally in July and August. For context, the ZMW has recorded monthly losses against the USD since September and is currently the worst-performing currency on a month-to-date basis, down by -1.13%, when looking at the performance of 23 African currencies tracked by Bloomberg. The ZMW weakness has in part, been driven by tight FX liquidity conditions. Demand for hard currency, especially from importers, has outpaced available supply and thus weighed on the local unit. Moreover, it is worth pointing out that the ZMW rally was in part driven by sentiment and that economic fundamentals remain the same at present. 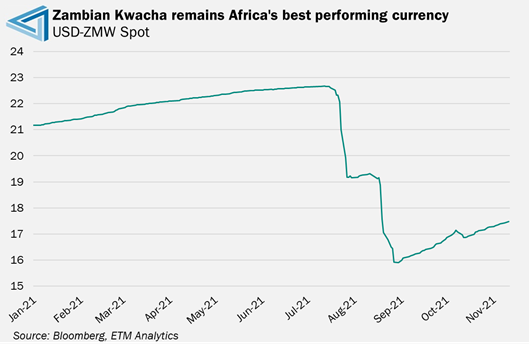 That said, the ZMW remains Africa’s best-performing currency on a year-to-date basis, up by 21.3% against the USD. The Mozambiquan Metical (+16.78%) is the second best performing currency. The broader ZMW resilience has been partly supported by improved FX reserve levels and prospects that President Hakainde Hichilema will rein public debt and the budget deficit while restoring the nation’s credibility following a default on its foreign loans and securing a deal with the International Monetary Fund. While rhetoric on the talks with IMF has been positive and the budget was a welcome step in the right direction, the targets set out by Minister Musokotwane will be difficult to achieve.

Although the broader bias remains bullish on the ZMW, the near-term outlook portends to the recent weakness persisting. For context, the ZMW is expected to remain under mild pressure next week as demand for hard currency continues to surpass supply, even with occasional central bank support.

Fixed Income: SA’s medium-term budget - restraint and reforms the main theme, but can they deliver?

A statistical reassessment of GDP has made an enormous difference to how these data are perceived. Whereas in Feb and previously through 2020, it was apt to talk about SA being on the edge of a fiscal precipice, that is no longer the case. The revision of GDP has helped create more fiscal wiggle room for the government and magically created another three to five years worth of breathing space in which reforms can be implemented.

It is a budget that contains vastly improved numbers compared to Feb and which comes as a relief to many. SA markets have responded positively to the news, with the ZAR recovering slightly and bond yields dipping. Also more encouraging is the commitment to some reforms and talk of fiscal restraint. As always, it will come down to delivery on those promises. At least this time, the government pencilled in some realistic growth forecasts and did not rely on strong GDP growth rates to "engineer" fiscal consolidation.

It is a budget that offers relief and highlights how the window of opportunity to implement reforms has opened a little wider. We can thank a strong commodity cycle and the response of the mining sector rather than anything that the government has done right. How the government uses this fiscal space through the next fiscal year will determine whether SA can reclaim some lost ground or whether the de-industrialisation that has characterised the past decade continues.

Macroeconomic: Africa’s oil and gas conundrum, Africa is once again late to a party that is coming to an end

2021 has been a historic year in the fight against climate change. This week saw both the United States and China, the world's top two greenhouse gas-emitting countries, which together account for about 40% of the world's annual carbon output, announce that they will cooperate on limiting emissions to address the global climate crisis. The COP 26 climate agreement aims to accelerate emissions reductions toward the goals set in the 2015 Paris Agreement.

While much of the western and eastern world have committed to reducing their environmental impact by reducing their dependence on fossil fuels and limiting investment in gas and oil projects, many African countries are pushing ahead with projects to extract their wealth of oil and gas reserves. East Africa has been a hot topic this year, with a number of oil and gas projects being tabled. Just this week, there has been a number of protests against these projects at the Africa Energy Week.

African ministers and investors alike have questioned the fairness of the protests against Africa's oil and gas investments and backlash from the international community, noting that Africa accounts for only around 3% of global emissions. The ministers added that crude oil and gas exports support a significant portion of government budgets and a large share of economic activity in oil and gas exporting countries. African countries, including Uganda and Kenya, are on the verge of becoming first-time producers. Both countries are counting on gas and revenues for their development plans.

Commenting on the matter, Sudan’s Oil Minister Puot Kang Chol said, “none of us is against renewables, but a transition must be inclusive and just.” Namibia’s Energy Minister noted at the conference that one in three Africans still don’t have electricity, highlighting the need to push ahead with a hybrid approach to generating energy in Africa. Going forward, this is going to be a sensitive topic for many African countries. While we expect the proposed oil and gas projects to go ahead, African countries will find it increasingly harder to raise funds for non-renewable energy projects.