US PPI fell back for the second consecutive month and eased concerns over inflation to some degree. That may have taken the wind out of the USD’s sails, but it remains strong against most of the majors. The BoJ has threatened to intervene, but such interventions historically have offered only fleeting relief. This point was again made this morning by Satsuki Katayama, the ruling Liberal Democratic Party's (LDP) head of a research commission on financial affairs. He indicated that Japan lacked the means of combating the JPY’s depreciation. What most countries now hope for is that the USD is fully priced and reaching its peak and that its own expense will sow the seeds of its reversal due to the widening trade deficit trend, notwithstanding the strength of the USD. The EUR-USD continues to trade below parity, although the GBP-USD has recovered back above 1.1500 to stabilise somewhat.

Mozambique: The bank of Mozambique will decide on its policy rates today. While inflation has risen for the past five months, the August reading of 12.10% y/y could be the high-water mark. Risks of a slower pace of price growth exist in the coming months amid government measures to subsidize transport and fuel imports. Therefore, we could see the central opt to keep its policy rates unchanged. That said, with the US and other major central banks hiking aggressively, there is a serious risk that the BoM Hikes rates.

Egypt: The Egyptian presidency announced that Egypt and Qatar have signed three memoranda of understanding, including one between the two countries' sovereign wealth funds. The agreements were signed during President Abdel Fattah al-Sisi's first visit to Qatar since Cairo and Doha restored relations last year following a regional diplomatic rift. Qatar and Egypt have moved quickly to mend relations since striking deals worth up to $5bn to assist Egypt amid the negative impacts of the war in Ukraine on the economy.

Mozambique: President Filipe Nyusi said that Mozambique's successes in fighting rebels since the March 2021 raid on the town closest to liquified natural gas projects means there is now "greater stability than the situation before the attack on the town of Palma." Nyusi added that the government, therefore, "considers it pertinent to consider the possibility of resuming development of construction work on land for the first liquefaction units." The Mozambican government is set to conduct more specialized meetings with the operators to discuss other support measures needed to maintain safety. The comments by President Nyusi could allay investor concerns going forward. Recall an Islamic State-linked insurgents raided Palma in March 2021, prompting TotalEnergies to declare force majeure on its nearby $20bn LNG export project, with no clarity yet as to when work will resume.

Nigeria: Plans to commercialize gas burned from oil fields in Nigeria are at an advanced stage, according to Petroleum Minister Timipre Slyva. The initiative is set to cut 15mn metric tons of carbon emissions from the atmosphere. While Slyva did not provide any further details, it is worth noting that Nigeria has been trying to harness the gas belching from its oil fields so it can be exported or used to generate power. The plans have, however, been deterred by a lack of finance. Nigeria has previously said it could be losing $1bn in revenue each year due to flaring, which also adds to extreme environmental pollution in the oil-producing Niger Delta.

International Monetary Fund: As part of a larger rethink of how it can best help its member nations, the IMF is looking at ways to help countries affected by the global food shock caused by the war in Ukraine. According to Managing Director Kristalina Georgieva, the Washington-based lender has proposed to its board that the institution increase access to emergency financing for a year to low-income countries that are most vulnerable to the changes in the cost of food, which "has skyrocketed." Georgieva added that about fifty nations meet the criteria, with 20 to 30 being in need "immediately." Consumers globally are grappling with a deepening cost-of-living crisis spurred by food and fuel inflation that, in many countries, shows few signs of abating. High prices have triggered a wave of interest rate increases that has made debt repayments more expensive and raised worries about a funding crisis in low-income and emerging-market countries.

Kenya: As the government moves to end a costly fuel subsidy that has weighed on its finances, Kenya increased gasoline prices by 13% to a record KES 179.30 ($1.49) per litre in the capital Nairobi. Meanwhile, diesel rises by KES 25 to KES 165 per litre starting today, and Kersone jumps 16% to KES147.94 per litre. According to the Energy and Petroleum Regulatory Authority, these prices will be in place for a month. Although the subsidy for petrol has been removed, a subsidy of KES20.82  per litre and KES26.25 per litre has been retained for diesel and kerosene, respectively, in order to cushion consumers from the otherwise high prices. Without the cushion, diesel would have gone up by a third to KES185.82, while kerosene prices would have increased by 36%. Overall, higher fuel prices will impact the cost of food production, transport, manufacturing, and electricity generation, and more price growth may force the central bank to tighten monetary policy further.

Most African currencies tracked by Bloomberg have weakened year-to-date against the USD amid headwinds such as monetary policy tightening, mounting global recession risks, and the war in Ukraine. However, the Mozambican metical has been among a handful of currencies that have been resilient. The metical is ranked the 4th best performing African currency, up by 0.13% year-to-date against the USD. 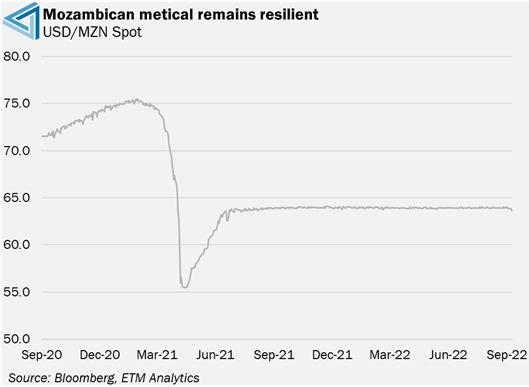 The resilience of the metical can be attributed to a more favourable macroeconomic outlook. This has led to several ratings upgrades this year and funding from the International Monetary Fund and multilateral partners, including the World Bank, after years of restricted access to funding sources following the "hidden debts" scandal of 2016. Meanwhile, the energy crisis in Europe has sparked increased interest in Mozambique's LNG sector and has accelerated efforts to get the LNG platforms online as soon as possible. The increased investor interest, improved economic outlook, and expectations for a marked jump in foreign currency inflows have put the country on an improved fiscal path.

While fiscal risks in Mozambique remain, the government is set to make further progress on policy reforms and in implementing prudent fiscal policy and management. In addition to the timely coming on stream of the LNG megaprojects, which are set to provide a massive boost to the country's fiscus, the outlook for the metical is likely positive.

Fixed Income: Central banks are trimming their balance sheets at an aggressive pace

Global fixed income markets have struggled in recent weeks. Worldwide inflationary pressures remain high and central banks have continued to tighten monetary policy to try and rein in these price pressures, taking yields to new cycle highs in the process. 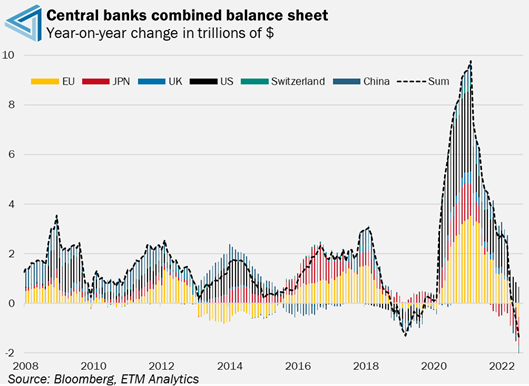 In addition to aggressively hiking rates, central banks are making use of quantitative tightening, with most major central banks trimming their balance sheets to assist in the fight against inflation. As can be seen in the accompanying chart, there has been a significant shift in monetary policy over the past two years. After injecting an unprecedented amount of monetary stimulus in 2020, which has been one of the main forces behind the recent inflation episode, major central banks are now absorbing liquidity at the most aggressive pace in more than a decade.

We do, however, see this as being near the peak for central bank hawkishness, with inflation likely topping out as commodity prices ease and tighter interest rates do their job. The outlook for global bond markets, therefore, is still bearish, but the market may be nearing its bottom as growth concerns are intensifying. This is highlighted by the inversion of the US and UK yields curves and the flattening seen along most European curves. Therefore, any further weakness could be seen as good buying opportunities as the worldwide economy starts to slow.

Consumer prices in Ghana have continued to rise, partly driven by persistent currency weakness, which is amplifying external price shocks. Specifically, headline inflation came in at 33.9% y/y in August, up from 31.7% y/y in July. While headline inflation accelerated to a multi-decade high in August, it is worth noting that the reading came in below consensus estimates for a more pronounced rise of 35.1%.

A breakdown of the data showed that food-price growth quickened to 34.4% in August from 32.3% in July, while non-food inflation accelerated to 33.6% from 31.3%. Transport and housing, water, electricity and gas costs rose sharply in August.

The quickening in headline inflation in Ghana comes despite the bold rate hikes by the Bank of Ghana this year and the introduction of measures to support the ailing cedi. Note that the Ghanaian government has also approached the International Monetary Fund for a $3bn economic-support program to assist the country with its fiscal problems and help regain investor confidence.

While Ghana is experiencing an inflation crisis, the fact that inflation came in below consensus expectations is encouraging. That said, the downside surprise doesn’t meaningfully change the macroeconomic picture, with the country still heading toward a period of stagflation.