Gold remains on the defensive this morning with fears of a slowing global economy and the potential of central bank tapering once again rearing its head. This morning we have particular focus on the ECB which is due to give its verdict on monetary policy, some market commentators have been vocal in their expectation for the bank to announce a token step towards reducing its economic support. The fact of the matter is that the market is currently being driven by the rise and fall of taper expectations. The fact of the matter is this will not be a withdrawal of liquidity but rather the fact of not adding more liquidity. The system is awash with dollars and euro’s and yen. Thus many fearing inflation and currency debasement will still find comfort in the ability of gold to act as a hedge against those pitfalls.

Oil prices are holding onto yesterday’s gains this morning as investors continue to digest the supply disruptions caused by Hurricane Ida. The front-month Brent contract is trading near $72.70 as a result, while WTI is steady above $69 amid expectations that a gradual return of output will tighten the market over the near term. So far, the return of production in the US Gulf of Mexico has been even slower than in the wake of Hurricane Katrina in 2005, which was a category 5 hurricane. Further adding to the bullish outlook is the fact that the API reported yesterday that crude stockpiles fell by 2.88mn barrels last week, which, if confirmed by today’s official figures, will suggest that demand remained relatively strong as output came to a halt last week during the worst of the hurricane.

Ghana: Headline inflation in Ghana accelerated to a 4-month high of 9.7% y/y in August from 9.0% y/y in the month prior. Prices climbed 0.3% on the month. August marked the fourth month in a row that inflation has risen in Ghana, with food inflation, the largest contributor to the headline inflation figure, rising for a third straight month. Meanwhile, housing inflation surged past transportation to become the second-largest contributor to overall inflation. A weaker Ghanaian Cedi, which has depreciated every month since May, has also driven inflationary pressures. Despite the continued acceleration, inflation remains within the central bank’s 6% to 10% target range. That will give the monetary policy committee room to hold the key interest rate at a more than nine-year low to support the economy’s recovery when it meets later this month.

Egypt: Speaking in an interview yesterday, Foreign Minister Sameh Shoukry said that Egypt had no interest in armed conflict with Ethiopia over a disputed Nile dam. Shoukry added that Egypt was committed to talks and that the “terminology has been that for any country, all options are always open.” Egypt and Sudan are concerned that the Renaissance Dam will undercut their access to Nile water, on which they rely for the overwhelming majority of their freshwater needs. Geopolitical tensions in the region are expected to remain elevated.

Egypt: Planning Minister Hala El-Saeed yesterday said that Egypt plans to restart a stalled program to list or sell additional stakes in state-run companies by the end of the year. The Minister added that the government has also received offers from four international consortia to rehabilitate and develop the Mogamma complex in down downturn Cairo. The Minister, however, declined to provide additional details about the offers. The move to restart the state IPO program appears to signal that the government is confident about market conditions that had soured over the past couple of years, in part due to broader emerging markets challenges and the impact of the coronavirus pandemic.

Kenya: As part of efforts to boost food security in the country, Kenya is seeking $132mn of investment in farming projects in drought-prone regions. According to an official from the Ministry of Agriculture, state-run Tana and Athi River Development Authority has identified four sites that require the money as an initial investment for integrated crop and cattle farming. Projects, including irrigation and production of fodder, will be developed in the counties of Embu, Tana River, Machakos and Makueni and are projected to generate an annual gross profit of about $37mn.

Zambia: Speaking after being sworn in, new Mines Minister Paul Kabuswe pledged to restore stability to the mining industry and help meet the government’s goal of more than trebling output. According to Kabuswe, “we need to bring sanity in the mines. There’s been so much confusion. There’s been so many different policies. I have grown up on a mine and I know that the mines are not giving us what is due to us as a country. We are going to move in with vigor and make sure that Zambia benefits from the mineral resource.” Copper producers have indicated that they are ready to start expansion projects worth $2bn in Zambia next year if the industry can reach an agreement on royalties with President Hichilema’s administration.

Zimbabwe: Data from Fidelity showed that Zimbabwe’s gold output climbed to 15,801.08KGS in the first eight months of the year. In August, deliveries rose to 2,948.03kg from 1,270.21kg a year earlier. Rising gold production will be a significant boost for Zimbabwe as it generates most of its foreign exchange earnings from mining, with major contributions from gold, platinum and chrome.

Forex: Volatility in the Zambian Kwacha falls but remains highest in Africa

African currencies, for the most part, have shown some resilience in recent times. With the exception of the ZAR and the GHS, regional volatility has pulled back in most of the currencies under review. When looking at the 30-day realised volatility, the most apparent improvement has taken hold in the ZMW followed by the MZN. Note that these are the two best performing African currencies on a year-to-date basis, with the ZMW ranked first and the MZN second. 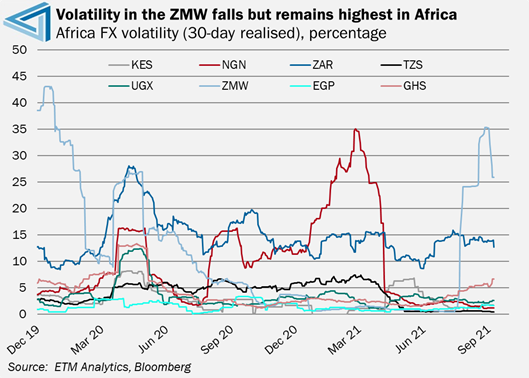 Volatility levels in the ZMW have fallen from a recent high of around 35.0% to hover just above 25.0% currently. The ZMW volatility has in part declined on the back of increasing dollar inflows amid the positive sentiment surrounding the new Zambian administration led by President Hichilema. Expectations that the new administration will rein in public debt and the budget deficit while restoring the nation's credibility following a default on its foreign loans, better foreign-exchange inflows from the mining industry, and improved gross reserves following the IMF SDR allocations are all factors that have supported the ZMW. Meanwhile, one of the highest real rates in the world supporting carry appeal has been crucial in supporting low levels of volatility in the MZN.

Although volatility levels have somewhat moderated, there is still a considerable degree of uncertainty priced in for regional markets. This may be the case in the months ahead until there are concrete signs of a nascent recovery in the respective economies. Additionally, headwinds from the pandemic, easing commodity run, and concerns over the global economic slowdown in the world's largest economies as well as idiosyncratic challenges pose further upside risks to FX volatility levels.

South Africa is the focal point in the fixed income space this morning after Deputy Finance Minister David Masondo unveiled a $10bn debt forgiveness plan in exchange for national power utility Eskom closing its coal-powered plants. Note that the shift from coal power plants to renewable energy and other sources of clean energy production is key to South Africa meeting its climate targets.

Deputy Finance Minister Masondo in order to transition from the use of coal to generate electricity to renewable energy, Eskom will need to borrow about R400bn, equal to its current debt, and will need a complementary transaction to achieve that. The proposed bill dubbed debt-for-climate-swap banks on around R145bn in debt to be forgiven creditors.

Note that the debt would be converted into equity in Eskom and would be conditional on the state energy provider closing down its coal-powered plants and as guarantees for further borrowing. While it is encouraging that the government is looking to achieve its climate goal, it is concerning that a key Finance Ministry member is talking about debt forgiveness. 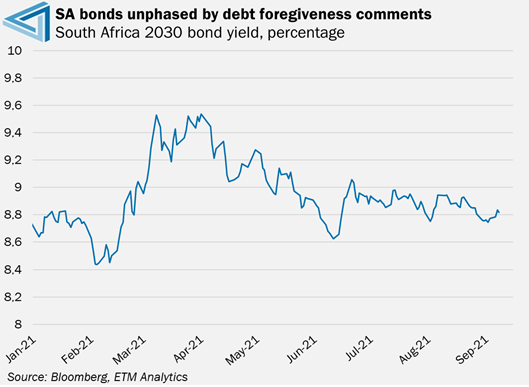 This will undoubtedly raise some red flags amongst fiscal hawks who have already been on alert following the significant fiscal degradation that has taken place over the past year and a half as a result of the COVID-19 pandemic. For now, the market response to the statement has been muted, with both sovereign and Eskom bonds unphased by the debt forgiveness proposal. That said, we do see the risk for this to detract from investor sentiment going forward.

While unlikely, if passed, this could set a precedent for other African countries that are heavily indebted and are looking to achieve their climate targets.

Macroeconomic: Fiscal prudence suggests that Egypt should be able to weather a Fed taper

While taper concerns have eased following the recent bout of disappointing economic data out of the US, the Federal Reserve is expected to begin winding up its bond purchasing program by the end of this year. The eventual taper will undoubtedly come as a headwind for emerging and frontier markets as dollar liquidity is soaked up from the global financial system. 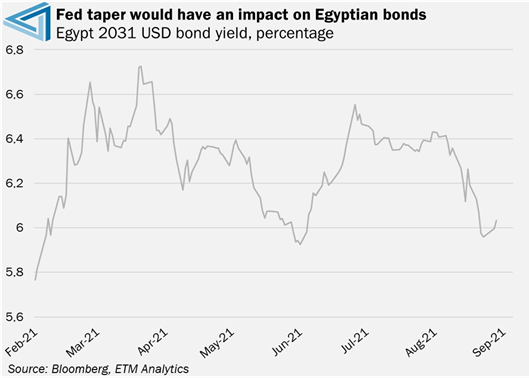 In an interview with Bloomberg, Maait said, “we are taking into consideration our experience with such a situation.” The Finance Minister was referring to the more than $20bn in portfolio flows that left the country over the past three years as a result of all the volatility in emerging markets and, more recently, the COVID-19 pandemic.

In a recently published report, S&P Global Ratings warned that Egypt’s reliance on borrowing has left it with a crippling debt-service burden that’s one of the heaviest among all sovereigns. The agency noted that authorities need to get more funding from equity sources if the country is to weather a potential increase in global interest rates. In conclusion, while a Fed taper would come as a massive headwind for Egypt, the country should be able to weather a tightening in global financial conditions if the fiscal prudence displayed since the IMF program ended is anything to go by.