Covid-19 remains a significant economic challenge across the continent. While the youthful demographic should mitigate deaths, low testing casts doubt on modest infection rates, tourism, remittances, and FDI are negatively impacted, capacity is limited for fiscal stimulus (because of rising debt levels in recent years) or interest rate cuts (because of FX rate sensitivity), and changes in foreign portfolio investor risk appetite (or fund redemptions in the case of the remaining pan-Africa or global Frontier funds) can overwhelm trading activity in what remain very illiquid markets (by global standards).

This combination of factors is best demonstrated in Mauritius, the region's worst performer, where the FX rate has depreciated c10% ytd, Moody's sovereign credit outlook was downgraded to negative, and the national statistics agency forecasts a 70%, 45%, 20% and 13% drop in tourist arrivals, textile output, construction activity, and GDP, respectively, in 2020.

A number of equity markets in the region are, to varying degrees, dysfunctional: foreign repatriation is not possible in Zimbabwe and severely impaired in Nigeria, price discovery remains compromised in Tanzania, and Mauritius was shut for two weeks at the end of March.

Among the region’s larger stocks, Telecom Egypt is the only one which is up significantly in absolute terms ytd (c30%), handsomely outperforming. This for the company-specific reason of a potential release of value in its 45% stake in Vodafone Egypt, following Saudi Telecom’s intention to purchase the majority 55% stake from Vodafone. 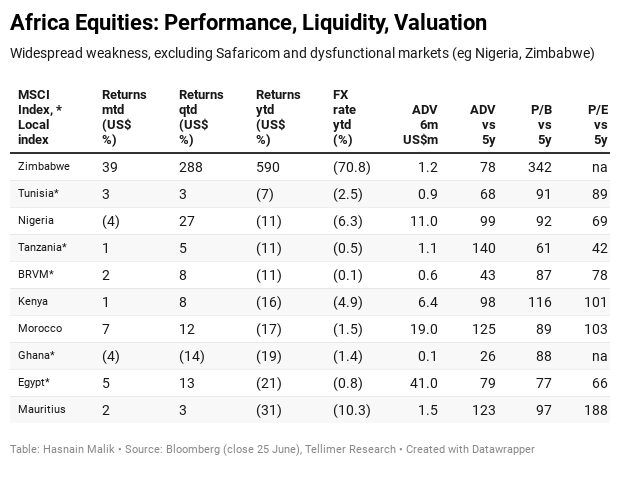 Egypt rapidly secured external funding (from the IMF and the Eurobond market), offsetting prior FX reserve erosion, and it remains the only market in Africa ex-SA on valuation multiples well below historic average.

However, political risk has deteriorated. Egypt is rattling its military sabre in response to setbacks for its ally in the Libyan civil war (LNA forces led by Haftar) and in its diplomatic efforts to block or at least slow) Ethiopia’s progress in filling up the GERD (which threatens downstream fresh water supply for water-poor Egypt).

While interstate war is unlikely, higher direct spending on the military is a bigger risk (after a decade during which this has fallen by a percentage point of GDP). This would be unwelcomed for the investment case given the military’s continuing, overbearing indirect grip on the economy and the strain put on the fiscal deficit from Covid-19 disruption.

Morocco’s King Mohamed has undergone his second heart operation in as many years (Crown Prince Hassan is merely 17 years old). Succession matters because of the central role of the monarchy and the royal court in policy-making.

Morocco faces ongoing challenges externally to maintain good relations with the EU, as well as both sides of the GCC, and cultivate closer ones within the AU, and, internally, to manage the sense of exclusion felt by the Berber ethnic group, maintain the inclusion in formal politics of the moderate Islamists, and counter the separatist risk from Polisario in the Western Sahara.

Nigeria: false outperformance as the scourge of FX dysfunction returns

Nigeria has outperformed Africa and Frontier equity peers ytd despite the drop in oil price. Regulatory changes which have restricted access to central bank securities (open market operations), high dividend yields, and the cut in interest rate may have pushed some local wealth into equities.

But this performance is illusory: most foreign institutional funds looking to exit are being trapped by FX shortages (which are likely to persist), dampening falls in share prices.

Kenya: Safaricom’s outperformance of the Banks amid high risks for all

Kenya has outperformed despite the divorce in the leadership of the ruling party, persistent fiscal and current account deficits, an over-valued FX rate, insecurity, and the damage to remittance flows and tourism from Covid-19. The threat from locust swarms has recently receded, but only after exacting a toll on the economy (agriculture is 35% of GDP). This list of risks keeps us cautious.

Total equity market performance masks the dichotomy between mobile telecom operator, Safaricom, which dominates the index and has outperformed the rest (eg the Banks). Safaricom's exposure to the staple revenues of mobile voice and data, and Covid-19 induced penetration gains for the digital payments sector (although regulation of transaction charges is dampening the near-term revenue impact), have likely driven this. Furthermore, Safaricom shares are far more liquid (average daily traded value of US$2.5mn is 50% higher than the combination of KCB and Equity). Yet, such a large disconnect in valuation and performance is perhaps too great for two sectors ultimately exposed to the same economy.

Zimbabwe’s equity performance should continue to be ignored because it reflects equities acting as a substitute for cash in a collapsing economy for locals and foreigners in the formal sector who are trapped within a dysfunctional FX market. There has been no progress on debt arrears to the World Bank, and poverty and food insecurity were critical prior to Covid-19.