One of the factors contributing to the global inflation conundrum has been the war in Ukraine and the disruptions of the supply chain. The full extent of Ukraine’s involvement in the global food chain was quickly uncovered when the war started with wheat prices and other staples rising sharply. In 2021 Russia and Ukraine accounted for almost 30% of the world’s total trade in wheat, this year Ukraine’s wheat production for 2022/2023 is expected to come in at 19.5m tonnes, down 13.5m tonnes or 41% from 2021’s figures. This makes the next few weeks vital as Ukraine is holding delicate talks to ensure that grain continues to flow from the Black Sea ports even after the deal with the Russians expires next month. The Ukrainians are not negotiating with Moscow directly, but instead through sub-negotiation groups which include Turkey and the United Nations.

Africa: Data released by the  African Private Equity and Venture Capital Association (AVCA) showed that Africa experienced record venture capital investment, bucking a global decline. Specifically, African start-ups attracted a record $3.5bn in venture capital investment in  H1 2022, bucking a global decline in dealmaking linked to worldwide economic turmoil. According to AVCA, the funding raised by 300 different companies represents growth of 133% compared to the same period last year. The increase in investment is largely driven by start-ups raising increased amounts to expand on the continent organically or through acquisitions. Fintech start-ups continued to attract the majority of investment inflows, accounting for 89% of deals in the financial sector. While West Africa accounted for the largest share of deals by volume, East Africa recorded the strongest growth in its share of deal volume when compared to the previous year.

Ghana: Reports citing a Cocoa Board spokesperson indicate that the regulator of the cocoa industry paid 175bp plus Secured Overnight Financing Rate on the $1.13bn syndicated loans signed on Monday. This compared with 110bp + Libor on the $1.5bn facility raised for the 2021-22 crop year. Ghana Cocoa Board signed the facility with a consortium of international banks following a roadshow to raise $1bn.

Kenya: In response to the worst drought in four decades, Kenya has lifted a ban on genetically modified crops. According to a statement from President William Ruto’s office, cultivation and importation of genetically modified white maize is now authorized. For the last four seasons, the annual rains have failed across Kenya, Ethiopia, and Somalia, forcing around 1.5mn people to flee their homes in search of food and water elsewhere. Kenya is also bracing for its lowest output of corn in 12 years hence there was a need to lift the ban.

Nigeria: In the October edition of the Africa Pulse report, the World Bank cut Nigeria’s growth forecast for this year to 3.3% from 3.8% in April. According to the IMF, the downward revision reflects the under-performance of Nigeria’s oil industry, headwinds from rising food and fuel prices, and “contractionary monetary policy.” Meanwhile, economic growth in Sub-Saharan Africa is forecast to slow to 3.3% this year from 4.1% a year earlier. GDP growth for the region, excluding the biggest economies, Nigeria, South Africa, and Angola, is projected to slow to 3.8% in 2022 from 4.4% last year.

Morocco: Minister for Energy transition and sustainable development Leila Benali has said that the Moroccan government plans to issue a revised energy strategy early next year to bolster Europe and global ties. The updated strategy will set metrics for the industry, taking into account the potential to generate renewable energy partnerships with Europe and the Americas. Morocco is already interconnected with Europe in both directions on gas and electricity markets and is also pursuing projects with West Africa, such as how to monetize oil and gas potential in Nigeria. The updated plan will come at an opportune time as European countries are seeking alternative sources of energy to reduce their dependency on Russian following the invasion of Ukraine.

Uganda: Uganda’s Presidency announced that Afreximbank has approved $200mn toward financing a contested oil pipeline to export Uganda’s crude. The African lender is also willing to finance the construction of a refinery in the country. The $3.5bn pipeline, which will run from landlocked Uganda’s oilfields in the country’s west to a port on Tanzania’s Indian Ocean coast, has drawn criticism from environmentalists and European Union lawmakers. According to the EU, the conduit will run through habitats of endangered species while affecting 118k people and displacing 100K more during construction. Still, Uganda remains defiant in its plans to exploit the oil and gas resources.

Oil: Oil prices have steadied this morning following a two-day rally as traders brace for the OPEC+ meeting today. The commodity has been supported by talks of an output cut being announced by the cartel and its allies today, with the expected reduction rising from 1mn barrels per day to 2mn barrels per day now. This has taken Brent crude back above $90 per barrel and WTI near $86 per barrel, their strongest levels in more than a week. Such a large cut in output would reflect just how concerned members of the oil cartel are regarding the outlook for demand going forward. It should be noted, however, that anything below the 2mn barrels per day cut would be seen as a disappointment and would lead to an unwind of the recent gains. A cut of 1.5mn barrels per day or smaller would barely have any effect on actual production, given that the group is currently producing below their current quotas by around that much.

Although Egypt is nearing a deal with the International Monetary Fund and government authorities have vowed the country will overcome the current “difficult circumstances” it faces, the Egyptian pound continued to weaken yesterday. The pound plunged to the lowest level since at least 1994 when Bloomberg started tracking the data, adding to year-to-date losses of more than 20% against the USD. These losses have seen the pound rank among the worst-performing African currencies in 2022 against the USD. 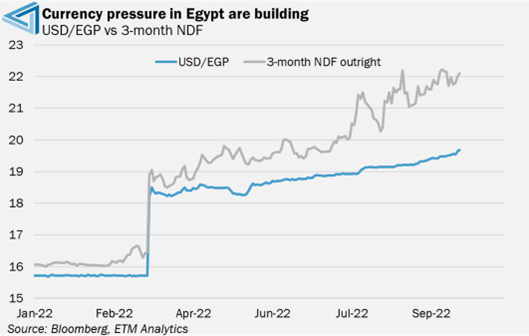 The continued decline in the pound has raised bets that authorities at the Central Bank of Egypt will have to let the currency weaken more sharply than anticipated before as a stronger dollar compounds the pressure. Traders have resumed betting for an even weaker pound since the end of last week, having pared those wages in the wake of last week’s decision by CBE to keep rates unchanged. For context, the 3-month non-deliverable forward has surged to a high of around 22.150 and is more than 12% weaker than the spot price. Note that a significant devaluation of the currency may be crucial to Egypt securing a new loan from the IMF, which favours a more flexible exchange rate.

As mentioned in previous commentary, there is room for another currency devaluation as the pound remains overvalued on a real effective exchange rate basis. An overvalued currency has left Egypt vulnerable to external shocks, as witnessed by the negative impacts of the war in Ukraine, and a more flexible currency system may be required to cope with the fallout of the war.

While crude production in Angola and Nigeria has fallen sharply in recent years, the two countries are on diverging fiscal paths. This is clearly reflected by recent credit rating action. After trending lower in the decade through 2020, Angola’s sovereign credit rating has stabilized and is starting to rise following a number of bold fiscal reforms rolled out by the government in recent years. Last month Moody’s upgraded Angola’s sovereign credit rating by one level to B3 from Caa1 on the back of an improving fiscal outlook. 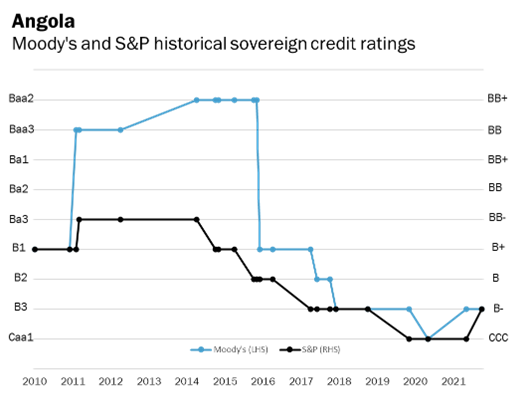 In contrast, Nigeria continues to slide down the sovereign credit rating ranks as fiscal pressures intensify amid the worsening lending conditions, weak macroeconomic outlook and an ongoing inflation crisis, forcing the Central Bank of Nigeria to hike rates aggressively. Notwithstanding the high international oil prices, Nigeria’s fiscal outlook is gloomy, with tax collections and surging debt servicing costs the most significant risks to the country’s fiscus. 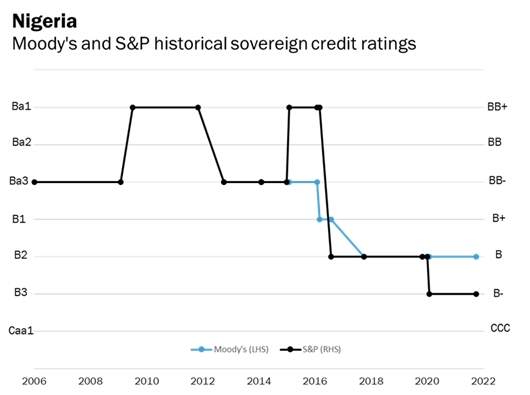 The divergence in sovereign credit ratings between Angola and Nigeria is a function of the adoption of prudent fiscal policy in the former and the lack of debt consolidation measures in the latter. While Nigeria’s debt pile continues to balloon, Angola’s debt burden is trending lower due to fiscal consolidation measures, including mass privatization and cutting back on public expenditure. Looking forward, while fiscal risks in both countries are acute, the fiscal outlook for Angola is significantly better than Nigeria's. As such, we expect Angolan bonds to outperform Nigerian bonds over the medium term (3-5 years).

The wave of African PMI data started yesterday and will continue today. With market focus centred on growth and inflation dynamics, the latest round of PMI data will offer valuable high-frequency insight into the health of many of Africa’s key economies. Yesterday saw the release of the September economy-wide PMI for Egypt and Nigeria. 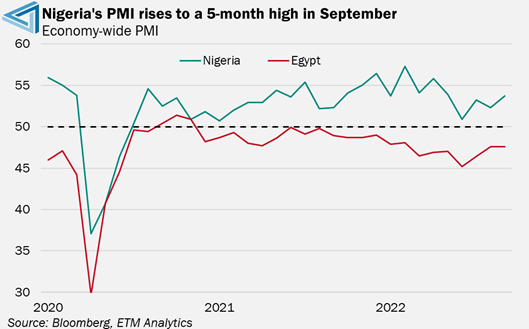 The PMI data confirmed that business conditions in Egypt's non-oil economy remained under strain from inflationary pressures, energy rationing, import restrictions and weak demand in September. Specifically, Egypt’s headline PMI reading came in at 47.6, unchanged from August. There was one positive takeout, and that was that the outlook for future business activity in the non-oil sector improved from August's near-survey low.

In contrast, business conditions in Nigeria continued to improve in September. Nigeria’s headline PMI reading came in at a 5-month high of 53.7 in September, up from 52.3 in August, amid sharper rises in output and new orders. While growth conditions improved, it must be noted that cost inflation remained elevated, in large part due to currency weakness. As such, companies increased their selling prices accordingly. This suggests that inflation will likely remain robust in the months ahead, which will force the Central Bank of Nigeria to remain hawkish.