The consensus view on Afghanistan is that with the abrupt withdrawal of US-led NATO forces, the resulting vacuum of decisive military power, and the rapid territorial gains of the Taliban (with minimal resistance so far), another long civil war looms.

The consensus view is that this civil war will have acute negative spillover of insecurity for Afghanistan's neighbours – Iran to the west, Pakistan to east, and the central Asian republics of Tajikistan, Turkmenistan, and Uzbekistan to the north.

In our view, this is too pessimistic and underestimates the capabilities and interests of China relative to other regional powers that might fill the vacuum of the US.

The implication of our thesis is that any instances of weakness in asset prices in foreign-traded markets like Pakistan should be viewed as temporary.

The Taliban takes back territory

The Afghan Taliban has seen districts under its control swell by 40 percentage points since April 2021, according to data from the FDD Long War Journal. And in the first half of 2021, the country has witnessed an almost 50% increase in civilian deaths related to violent conflict and 270,000 new refugees, according to UN data, bringing the total number of displaced persons in the post-2001 conflict to 3.5mn (or close to 10% of the population). 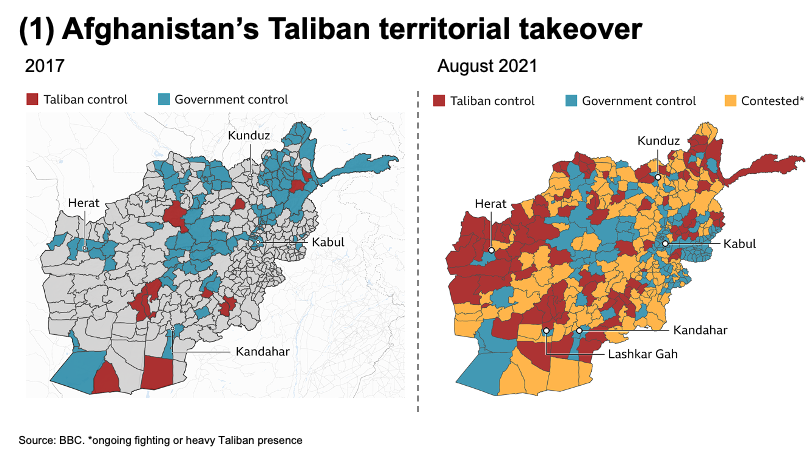 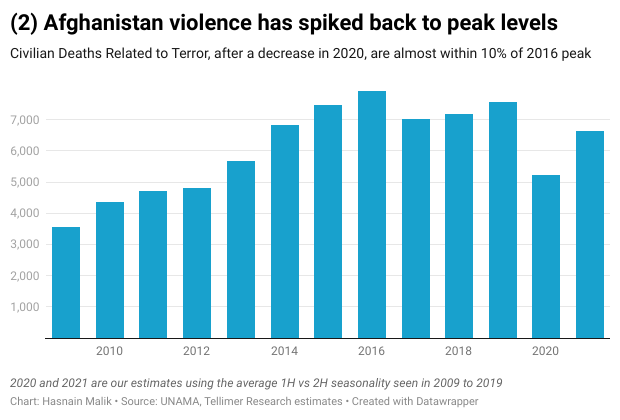 The spillover risk for Pakistan

The main foreign-traded assets at risk are bonds and equities in Pakistan. The risk has increased the risk of sporadic attacks in Pakistan, raising investor concern that its hard-won improvements in security, which grounds the entire reform and recovery thesis, will be lost.

If the Taliban is not included in the government in Afghanistan then the continuation of violence will fuel refugees and the seepage of violent non-state actors through the porous border into Pakistan. 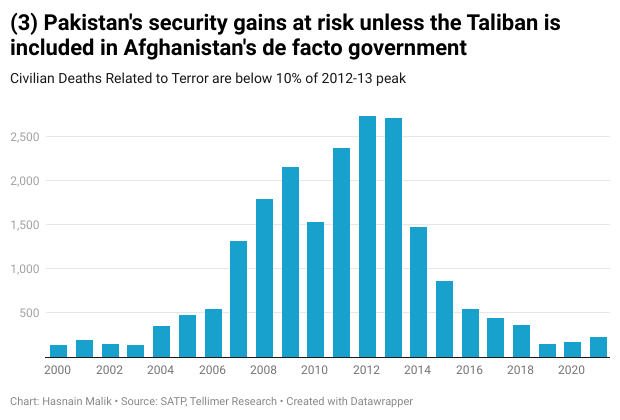 There are grounds for challenging this consensus view, or at least pointing out that the likely outcome may be more nuanced. We would view any instances of a sell-off in Pakistan-listed securities on fears of a return to sustained, chronic violence and economic disruption in Pakistan as too pessimistic.

The original, narrowly-defined, mission of the US-led forces in Afghanistan, to dismantle the capability of Al Qaeda to organise and launch more international terror attacks like the 9/11 ones in the US, was successfully achieved.

However, in every other respect of what became a very blurred mission – dismantling the Afghan Taliban, promoting liberal democracy, curtailing the cultivation of opium, regenerating the legitimate economy and encouraging foreign investment beyond aid, and securing access to Mineral mining projects – the effort has been a failure.

The failure of the broader mission matters for three reasons: 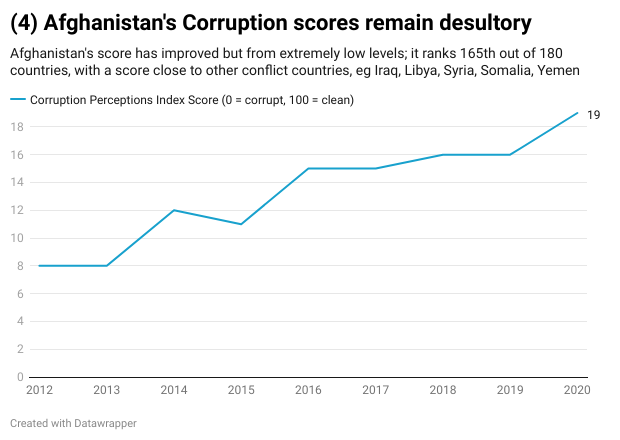 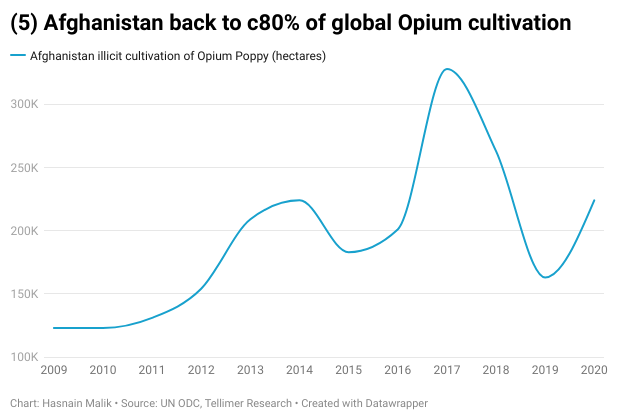 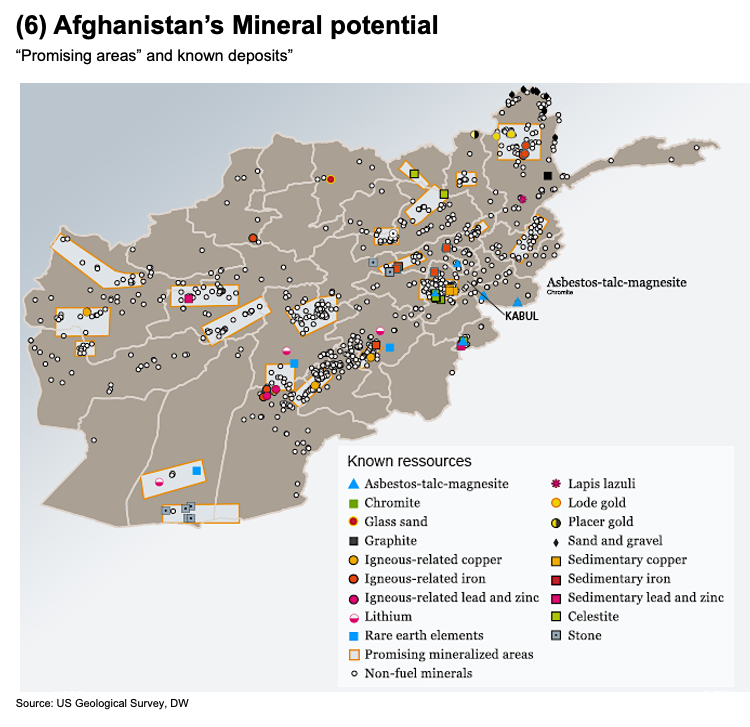 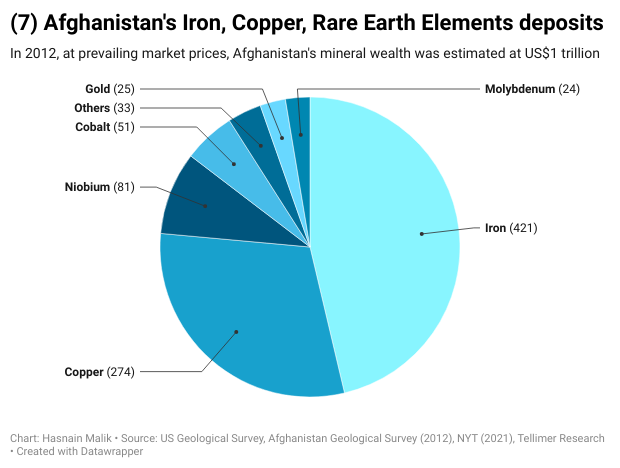 This gloomy consensus view is predicated on a key assumption that there is no international power interested, willing, or able to take up the US mantle to either preserve the status quo in Afghanistan, re-shape that status quo, or prevent the insecurity resulting from a protracted conflict from spilling over Afghanistan's borders.

But now that the US has scaled back its involvement, China, Russia, Iran, and India – none of whom comes close to rivalling US military power at a global level – may each have the wherewithal to exert an influence in Afghanistan at a regional level. 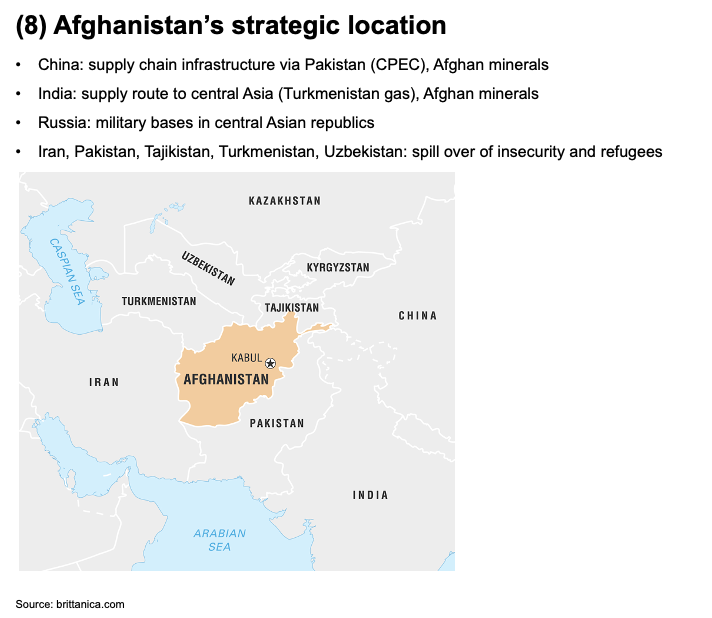 China – China has demonstrated, in the South China Sea with Vietnam and the Philippines, the Taiwan Strait, and the Himalayan border with India, its willingness to deploy military assets to project power and defend its interests. It has also proved its willingness to challenge previously accepted international norms in its actions in Hong Kong, again, where it sees its interests at stake.

Russia – In Georgia, Libya, Nagorno-Karabakh (Armenia-Azerbaijan), Syria, and Ukraine, Russia has demonstrated, since 2001, a willingness to deploy military assets internationally where it sees either its direct interests at stake or an opportunity to establish leverage that can be applied to those direct interests.

India – Partly in response to fears of encirclement by China, eg the naval String of Pearls which refers to Chinese port and island interests stretching from Indonesia to Tanzania, and partly with the ambition of pressuring Pakistan, India has supported and financially invested in successive Afghan governments following the overthrow of the Taliban.

Iran – Since 2001, Iran has demonstrated an ability to arm, fund, and organise proxies and allies outside its borders in the manner it had for decades prior (and since) in Lebanon and Syria. This is notable in neighbouring Iraq, most of all, and that too thanks to the other theatre, apart from Afghanistan, where US-led forces won the narrow war but lost the broad peace, but also in Yemen.

China most likely to fill the US vacuum

China's military expenditure dwarfs those of all regional powers that might seek to influence the outcome in post-US Afghanistan, ie Russia, India, Iran, and Pakistan.

And China's interests are very closely aligned with Pakistan, both because of its investments in the China Pakistan Economic Corridor, arguably the most strategic, advanced, and enduring part of its Belt and Road Initiative, and because of its competition with India, which extends from Iran and Pakistan, to the Himalayan border, and to the Indian Ocean.

There is very material risk to the security gains made in Pakistan over the last decade. Another influx of refugees and the spillover of violent groups motivated to destabilise urban areas and infrastructure, particularly, on the western side of Pakistan, ie the provinces of Khyber-Pukhtunwa and Balochistan, could set Pakistan's recovery and reform story back.

But a de facto inclusion of Taliban forces in the government of Afghanistan, at the very least, reduces this risk. A disenfranchised and frustrated Taliban, able to cross the porous border, is a more frightening prospect for Pakistan than a Taliban enmeshed in the fabric of Afghanistan itself.

China has not deployed decisive military force beyond the periphery of the borders it claims, eg across the Nine-Dash Line in the South China Sea. As such, if outside powers do come to the aid of the Afghan government, with military and financial support, this arena may turn into the first test of China's superpower pretensions. Will it deploy decisive military force in an area well outside its own border in order to secure international supply chain routes for its external trade?

Should the Taliban find themselves pushed back to the territories they controlled prior to this year's offensive, become embroiled in a protracted civil war, and create insecurity in Pakistan, it would be in China's interests to deploy decisive military force. This is reinforced by China's potential interests in securing access to Afghanistan's mineral and rare earth element prospects. 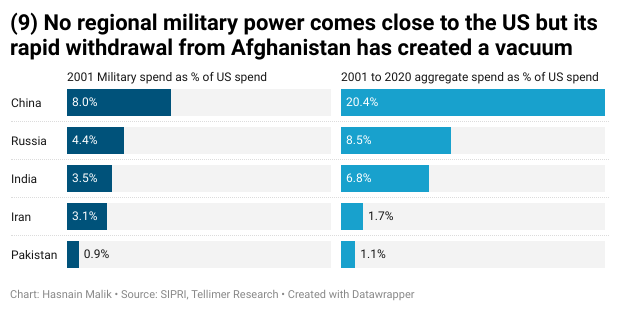 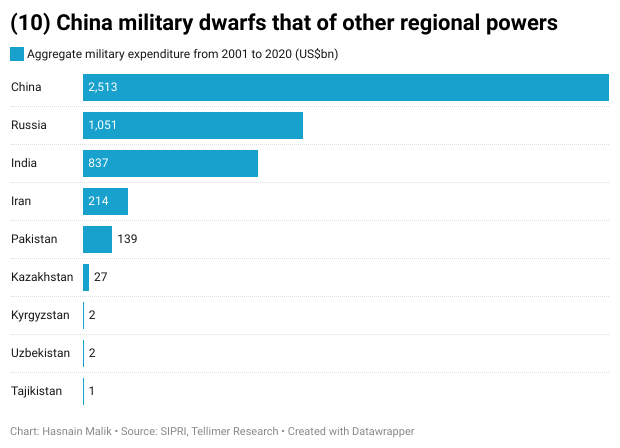 History may not repeat but it is cyclical 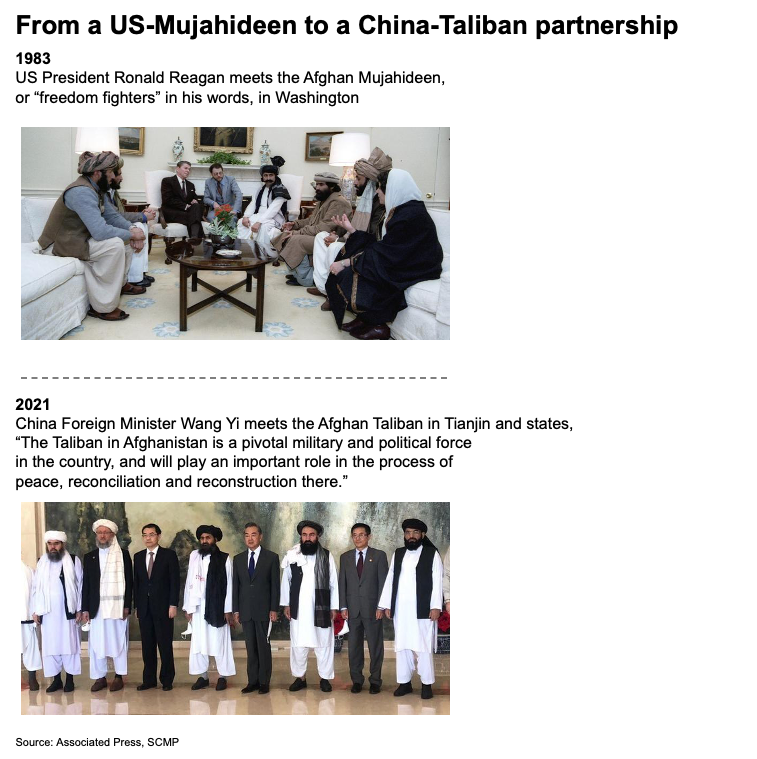 India, China, Pakistan detente but we've been here before so low expectations, March 2021