Active investing in EM equity after Covid-19: A final chance against passive

As part of our look at the consequences of Covid-19, we focus here on institutional fund management in emerging market equities. Our view is that the disruption and dislocation of markets and business models may offer a last chance for active management in Emerging Markets, against the growing passive onslaught. For Frontier, the index may already be broken, and mandates which look more like private equity may be needed.

Passive funds have been winning share from active funds for many years. In developed markets they now account for over half of the asset class. Drivers of this include lower fees, more sophisticated versions of passive (thematic passive funds), steadily rising markets, and the underperformance of the average actively managed fund.

And the rise of passive funds has made outperformance of actively-managed, bottom-up, fundamentally driven asset allocation more challenging, because the weight of passive flows – particularly when prompted by index changes – can overwhelm specific company or country investment cases and, all other things equal in a rising market and within a steady drop of inflows, the performance of passive funds can become somewhat self-fulfilling. 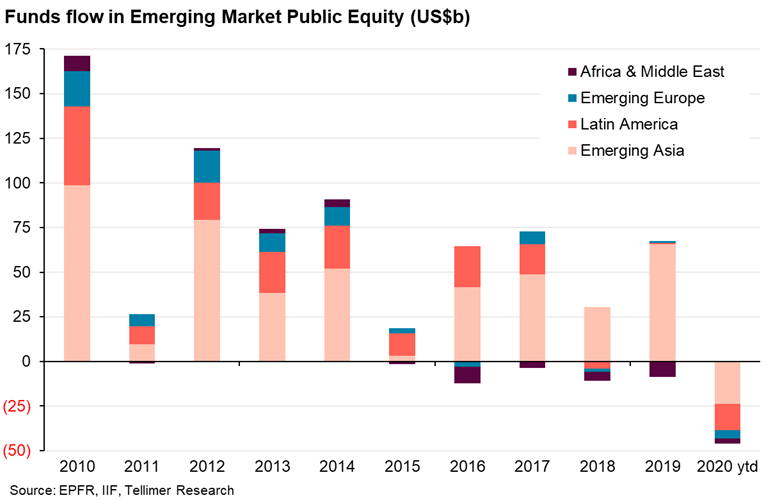 The vulnerability of passive funds should be greatest when there are major shifts in the backdrop of the market; breaks in the fundamental trends which have supported the largest components of an index. Passive funds have no defence against this, almost by design.

Furthermore, the damage in performance can act as a reminder of the need to think longer-term, in terms of wealth creation; ie closer to the sort of time frame needed by successful, fundamentally-driven managers to achieve outperformance on the basis of a repeatable investment process. 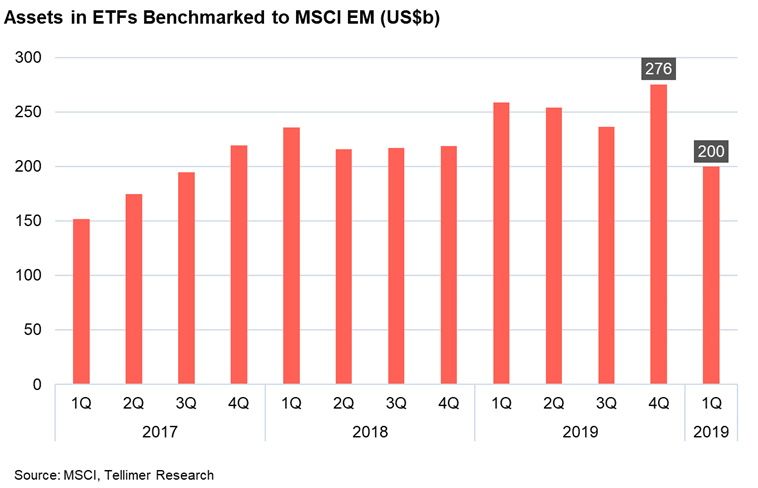 China and Korea-Taiwan Technology drive the majority of the weight in the EM equity index and EM traded value (liquidity). They also happen to be among the beneficiaries of China’s rapid emergence from Covid-19 disruption, the accelerated adoption of new technology across a range of services, and the gravitation of liquidity further into these dominant parts of EM during the current crisis. This should reinforce the outperformance of these largest index weights: all other things equal, this would suit passive fund strategies.

Brazil, India, South Africa and Russia were already small relative to these markets and the likes of Saudi and Thailand were already too small to sway the performance of mainstream EM funds. The tail of irrelevant emerging equity markets (but sizeable countries and economies) for those benchmarked to the EM index has grown very long indeed. 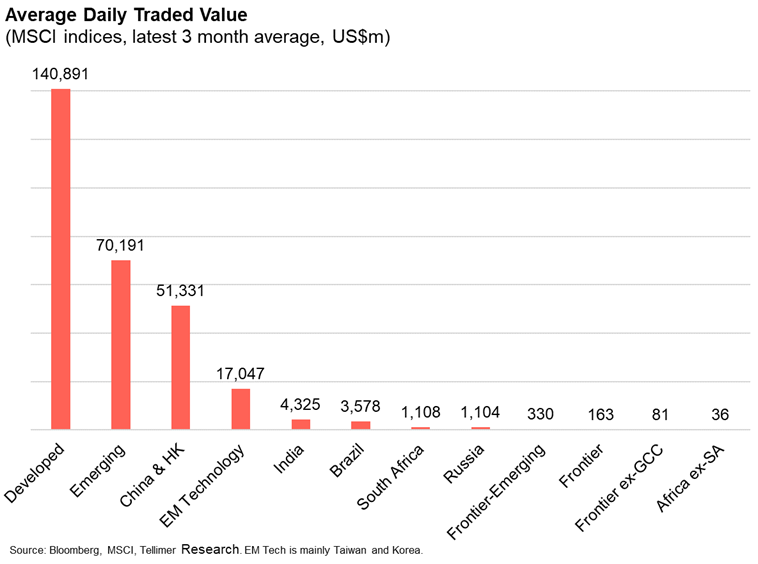 But what if China on the cusp of one those major shifts to which passive strategies cannot easily respond?

However, we are sceptical that China can so easily recover (we find it incredible that infections, on official data, flatlined so early) and think that social distancing will reappear, that the shock to export demand has been felt fully, and that there will be lasting ripples in, for example, the shadow lending system, from the economic sudden stop. If this proves to be the case then this would equate to one of those periods when actively managed funds, positioned for this change in consensus view, could substantially outperform the passive comparators.

Furthermore, the increasingly intense cold war between the US and China may present mainstream EM funds (both active and passive) with questions they have not faced before: will the weaponization of diplomatic, technology, territorial, and trade tools used by both sides in this cold war extend to capital markets and does that mean that, at some stage, there is a material risk that Chinese equities are deemed offside by US regulators? If so, that is not a question that passive strategies can easily take a view on in advance.

In Frontier Markets, the passive threat is much less advanced and should be much easier for active fund managers to defend against. A long list of factors suggest that actively managed strategies should outperform passive in small EM-FM: 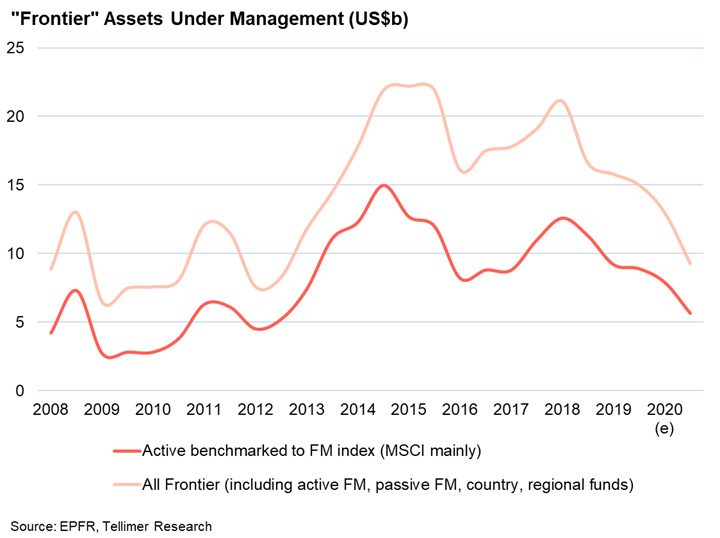 The biggest challenge for the small EM and FM asset class is that it has not yet reached a critical scale where asset allocators, as a whole, have to consider it and are drawn to individual funds by performance relative to a benchmark or peers alone. Instead the fate of a small EM and FM equity manager is perhaps much tougher; they need to substantially outperform DM and large EM and, ideally in more normalised environments, deliver positive absolute returns in US$ terms (regardless of DM and large EM performance).

FM may have to redefine itself as a quasi-private equity asset class, with much longer-lock up periods and the ability to invest in local currency and US$ sovereign bonds as well as public equity.

In the interim, small EM and FM equity markets likely return to being an almost entirely locally driven market where the catalyst for re-rating comes not, as it might have done in the past decade, from foreign investors but, rather, from local investors attracted to local equities when valuations relative to local bond yields and bank deposit rates become attractive.

Of course, for any small EM and FM fund able to withstand this crisis, the fruits of perseverance could be unrivalled; valuations are arguably attractive across the board (given the mainly strong balance sheets in every country’s bellwethers) and structural reform and growth themes should ultimately reassert. 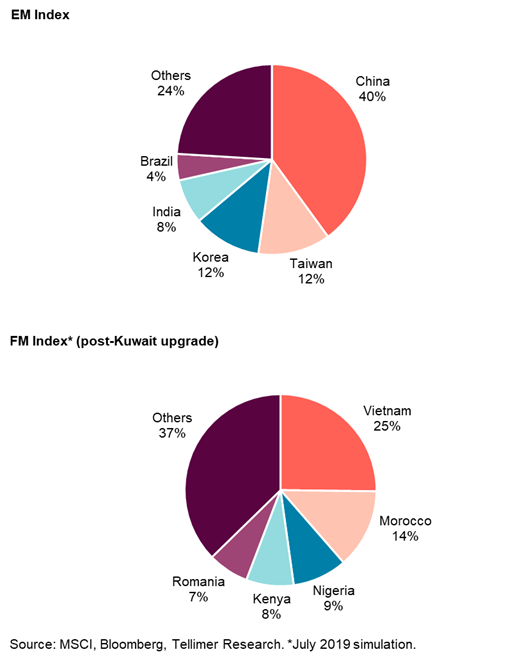 You can read more about how Covid-19 is reshaping the world in our recently published report Waiting on the World to Change, in which we explore how the current crisis will result in new normals for politics, macroeconomics, business models, and finance.

China and EM Tech valuation discount vs DM narrows ytd; not so for small EM-FM

7 reasons to consider investing in small EM and Frontier