Further to Access Bank’s update on its strategic business plans, the group recently received regulatory approvals to acquire South Africa-based Grobank Limited from GroCapital Holdings, for a consideration reported to be valued at approximately ZAR400mn (cUS$26mn). The acquisition is expected to be completed in Q2 21 and brings the group one step closer to its objective of operating across 22 countries (accounting for c85% of the continent’s nominal GDP) and becoming a financial aggregator for Africa, with a focus on cross border payments, trade finance support and correspondent banking. 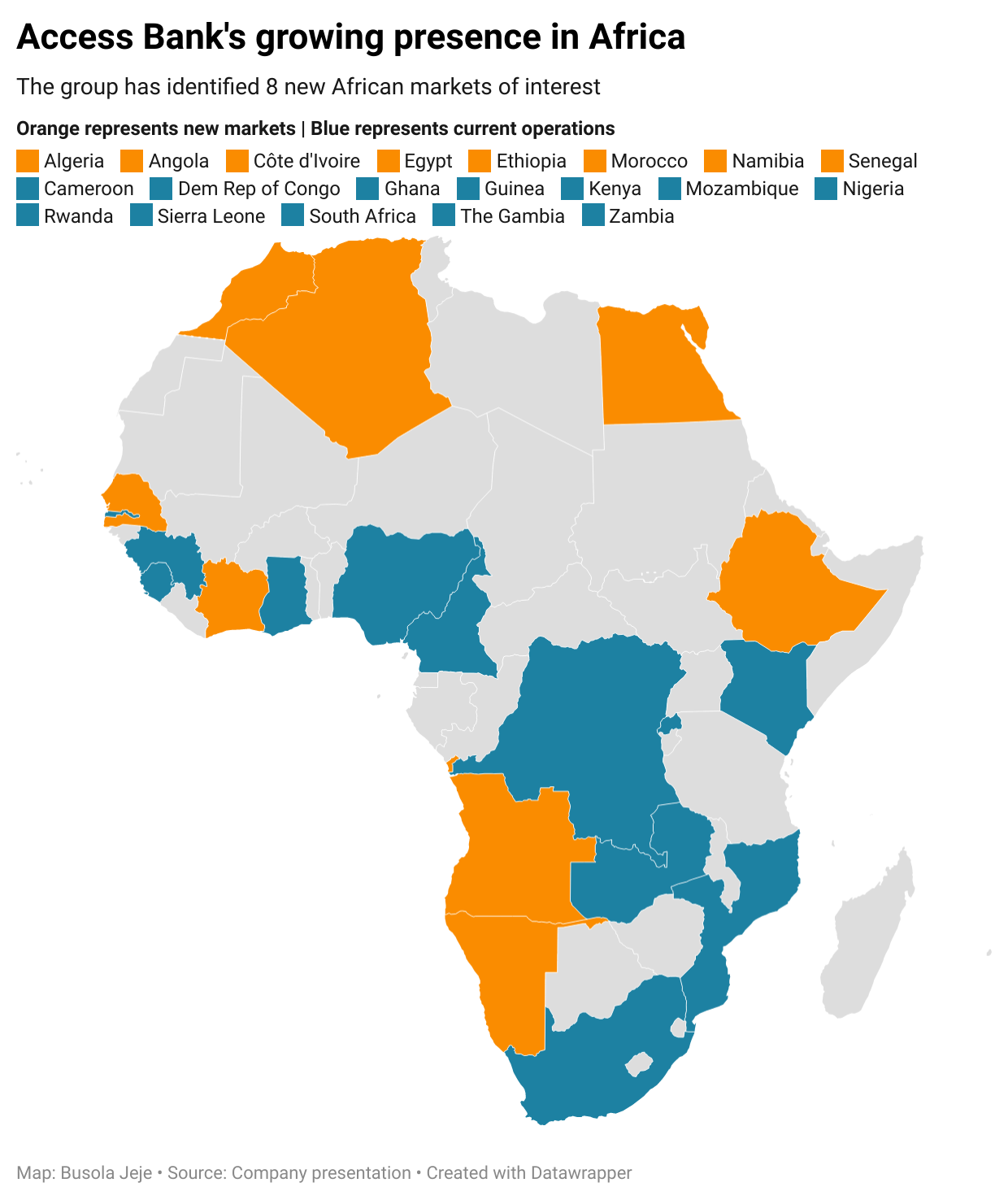 The entry into South Africa further grows the group’s presence in the Southern African Development Community (SADC) region, coming soon after the completion of the acquisition of Cavmont Bank by Access Bank’s Zambian subsidiary in January 2021.

Grobank Limited is a relatively small tier-2 bank in South Africa, with a market share of c0.06% by total assets. It is focused on business banking for SMEs, agri-business banking, alliance banking (which involves providing banking offerings in partnership with fintechs and other non-banking entities, to their clients) and foreign exchange services. The company was previously known as South African Bank of Athens, until it obtained new shareholders in 2018 (AFGRI Holdings, Fairfax Africa and the Public Investment Corporation) and repositioned itself as an agricultural-focused banking entity.

While recent detailed financial information on Grobank is limited, analysis of available information showed the company reported losses consistently from 2013 to 2018, having an accumulated loss position on its balance sheet of ZAR207mn (cUS$14mn) in FY 18. Also, Global Credit Ratings downgraded the bank’s national scale ratings in November 2020, citing increased risk to the balance sheet owing to deteriorating levels of capitalisation, less stable funding with moderate levels of liquidity and negative effects of the Covid pandemic on the bank. The rating agency also noted that the bank’s capital adequacy ratio was close to breaching the regulatory minimum requirements as at September 2020 (FY 19 CAR was 14.6% vs the regulatory minimum of 10%). Upon acquisition, we think Access Bank will need to recapitalise Grobank in order to boost risk asset creation and increase revenues from both net interest and non-interest income lines, as well as improve operating efficiency.

Our views on Access Bank’s expansion plans remain the same

We retain our existing view; while the group's strategy looks positive for earnings diversification, deconcentration of operating risk and cross-selling opportunities – in line with its holding company restructuring, it will face headwinds from such an aggressive expansion.

The key difficulties in entering South Africa, and to a broader extent other African countries, will be the need to grow market share and operational scale as well as maintain a robust capital position compared to minimum capital requirements and incumbent players. This is particularly critical for a relatively mature market like South Africa with total bank assets about 3.5x that of Nigeria, dominated by large players like Standard Bank, FirstRand, Absa, Nedbank and Investec which control more than 75% of total bank assets.

Furthermore, the continued expansion plan will put a significant strain on Access Bank's capital position (CAR: 21.1%, Tier 1 CAR: 15.8% as at 9M 20). Also, relating to the need for more capital, dividend payout (FY 19: 24% compared to >40% for GTB and Zenith) to shareholders will likely be strained in the near term, as the group will rely on retaining profits to boost capital expenditure, as well as fortifying capital ratios. But on the positive side, the group’s entry and expansion into more African countries has the potential to provide earnings support by diversifying earnings generation away from Nigeria. A case in point is United Bank for Africa, which operates in 20 African countries. Its revenues from other African business grew 40% yoy in FY 20, while the Nigeria segment declined by 8%. As a result, African subsidiaries (ex-Nigeria) contributed 37% to total revenue (FY 19: 28%), while Nigeria contributed 60% (FY 19: 69%). We have a Buy rating on Access Bank, with a 12M TP of NGN 12, which suggests an expected total return of 47%. 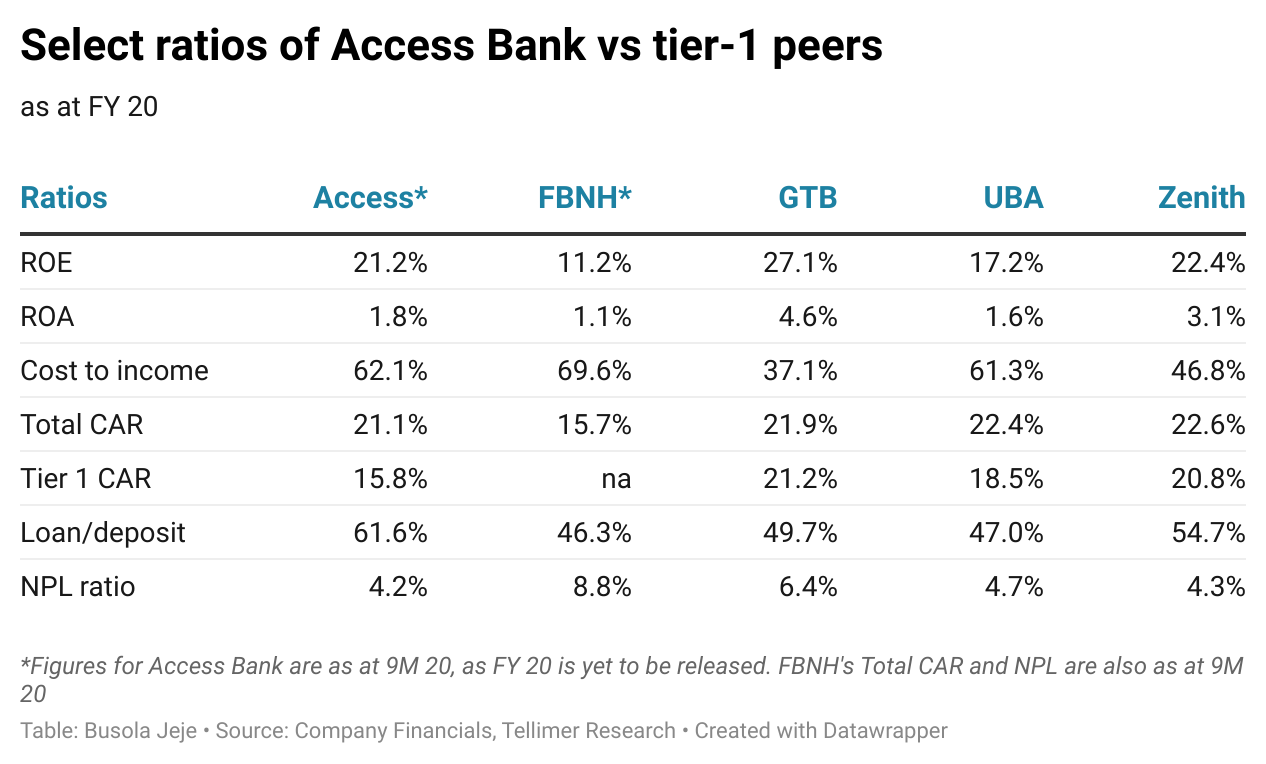