A new civil war in Lebanon: time to consider the consequences

Lebanon has degraded so rapidly – both economically and politically – that we may now need to seriously consider the prospect of a new civil war. The brinkmanship seen between rivals traditionally protected by the confessional political system and sponsorship from external powers has moved beyond the points of distress which, in the period since the end of the 1975-1990 civil war, have prompted a change of course, eg protests, a sovereign default, and a currency collapse.

Lebanon and Pakistan: more similar than you think

I presented to an emerging and frontier market portfolio manager about five years ago who happened to be Lebanese and he was frustrated with the inaction of the political class in his country of origin. I suggested there were similarities between my country of origin, Pakistan, and Lebanon: for example, both were born within a few years of each other in the 1940s out of the era of colonialism with ethnically heterogenous populations, both have been changed by the domestic insecurity and conflict, both have seen an influx of refugees from conflict in their neighbours, both have been a venue for proxy battles between larger external powers, both are economically dependent on remittances from a large diaspora and loans from geopolitical sponsors, and, at different times both have been regarded as in the vanguard of economic and human capital development in their respective regions.

I recall how his face hardened when I suggested that the example of Pakistan suggested that political and economic institutions in Lebanon could erode a lot more without actually causing the collapse of the state, the diaspora could keep the economy going well after its domestic engines of growth stalled, and external geopolitical sponsors could sustain their local political proxies for longer than the indigenous population would. The more I pursued the comparison the more discernible his wince. I finally got the message that he did not appreciate the comparison with such a supposedly backward country and I moved our discussion on.

At the risk of offending more folk who hold Lebanon dear to their heart, I would like to revisit this comparison with Pakistan to suggest that a civil war cannot be ruled out and speculate on the repercussions. 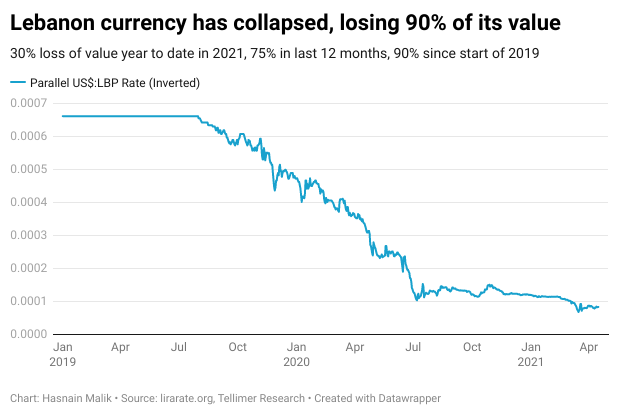 Key difference is the nature of elite vested interest

Today, when I reconsider the comparison between Pakistan and Lebanon, there is one key difference: in Pakistan there is one dominant vested interest group or deep-state, the military-intelligence services, whereas in Lebanon there are competing vested interests, embodied at the broadest level in the two main political alliances (which persist today even if they do not formally identify themselves under these banners):

This standoff is a result of the "confessional paradox" in Lebanon. Parliamentary seats, ministries, and government leadership roles are allocated on the basis of allowing representation for each of Lebanon's ethnic groups. This has been a guarantee of peace following the 1975-1990 civil war but also a guarantee of policy inertia (eg the absence of reforms and enduring institutionalised corruption. The old arrangements are now strained, potentially beyond repair, because no political group wants to bear responsibility for the sclerosis.

This difference is critical because there comes a point where the dominant vested interest group will pull the country back from the brink, having plundered through rent-seeking whatever value it can from the state's economic assets, recognising that unless it corrects course the future economic output of those assets will not be sufficient to sustain it.

This is the reason why Pakistan's military-intelligence elite finally got serious about its chronic insecurity and its diplomatic isolation after its peak in civilian deaths in 2012 (the year Malala Yousafzai was shot) and set about a long period of repair (eg Zarb-e-Azb counter-offensive against militants in 2014), international re-engagement (eg China-Pakistan Economic Corridor signed in 2015), and reform (addressing corruption in governance, via public court martials from the military in 2016, and via the legal cases such as those against former PM Nawaz Sharif, based on the Panama Papers disclosures, and more recently reform of the economy).

But, of course, the elite preserved its own position (e.g. current Army chief Qamar Bajwa has stayed on for a second term unlike his predecessor, and it remains the case that no civilian government can operate without the support of the military-intelligence services). 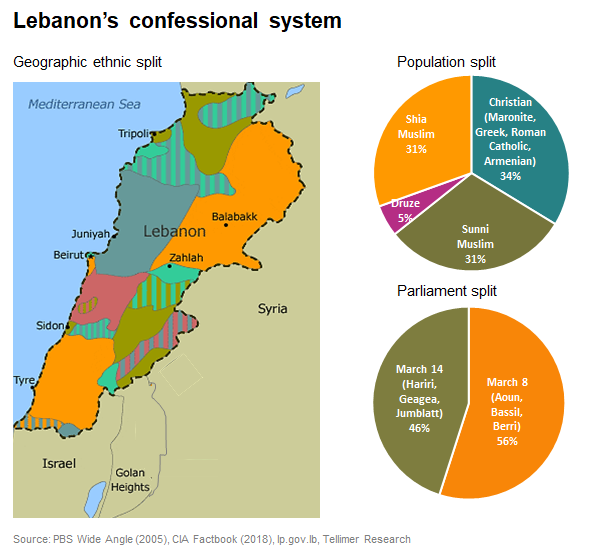 Is another civil war looming in Lebanon?

In Lebanon, the absence of a dominant vested interest group means the point at which a correction in course takes place is, dangerously, much further out. Going back to the frosty moment in my meeting with that client five years ago, neither of us would have predicted that the institutions of Lebanon's government would erode so much and so quickly in the way they have since mid-2019.

The collapse in Lebanon over the past two years, caused by crises in banking and sovereign debt (the Ponzi scheme of ever-increasing bank holdings of government debt), politics (the failure to establish a working government), healthcare and tourism (the Covid-19 pandemic), and living conditions for the masses (food price inflation and high unemployment) has been well documented.

Perhaps less well considered is the potential repercussions for the region should a full collapse of the state occur. Can we be confident that there will not be another civil war? The 1975-1990 civil war saw conflict between many armed militia, incursions into Lebanon's sovereign territory by Syria and Israel, and the exodus of about a million refugees. Should another complete breakdown in central government occur, the following are potential repercussions. This discussion is obviously highly speculative and the scenario painted is so bleak for Lebanon that one would hope it might persuade all concerned parties to pull back from the brink – but one might have said this at any point from 1975 to the late 1980s. 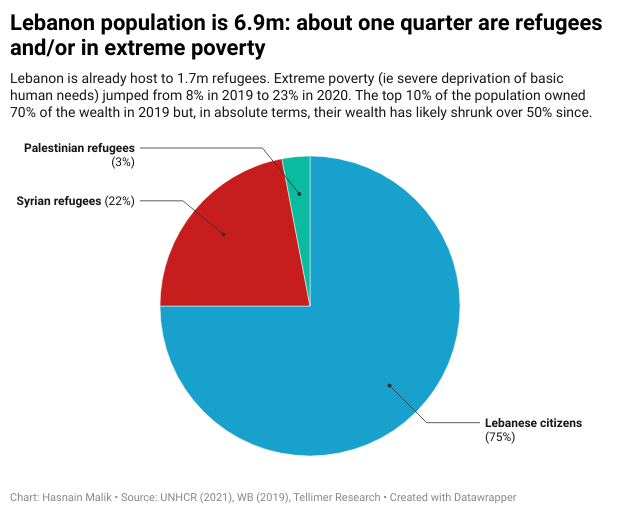