The cloud computing industry has been growing rapidly in this decade, with the technology paradigm-shifting drastically. In China, the deepening digital transformation initiated a new chapter for the cloud computing business, one wherein the Internet is more accessible, and data is generated at a high speed.

According to CNNIC, a national IT think tank, China had more than 989 million Internet users by the end of 2020, accounting for approximately 70% of the country's total population, whereas the figure only stood at 909 million a year ago. The COVID-19 crisis has clearly contributed to an accelerated penetration rate of Internet users in China. The user behavior changes have not only burdened the workload of the network but, at the same time, further inspired the development of the cloud industry.

From cloud to 'edge cloud'

Compared with the global market, China's cloud landscape is primarily led by the Infrastructure-as-a-Service (IaaS) segment. Dominated by the public cloud service and IDC service providers, the rising IaaS has developed several verticals to meet the evolving needs: cloud security, content distribution network (CDN), docker, cloud storage and so on. Simultaneously, innovative technologies such as AI and those enabling the Internet of Things (IoT) urged the cloud providers to adapt to the scaling technology deployment; edge computing came into the public sight. As estimated by GSMA, connected devices may reach 24.6 billion by 2025 while the IoT market size may exceed USD 1.1 trillion at the same time. 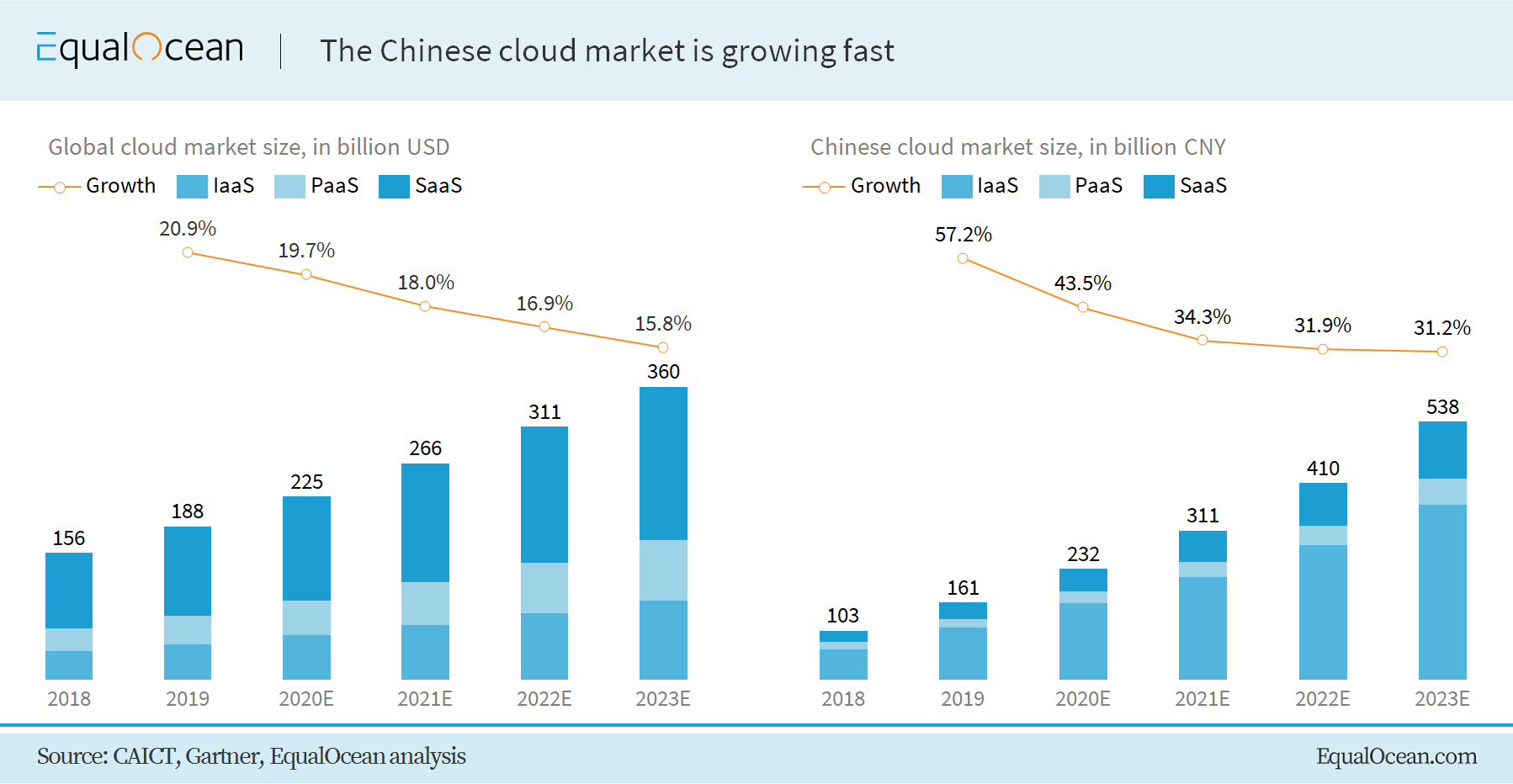 Standing for a decentralised form of cloud computing, the so-called 'edge' networks can promptly respond to regional service requests. Forecast by MarketsandMarkets, the edge computing market size is expected to grow from USD3.6bn in 2020 to USD15.7bn by 2025 (a 34.1% CAGR). Driven by the expansion of IoT applications and increasing network traffic and low-latency processing demands, edge computing is appreciated for strengths like a fast response, higher efficiency and improved security.

Edge computing is at an early development phase, and pioneers in the field are mostly found to be network service providers, along with CDN vendors. CDN is a geographically distributed group of services that provides fast delivery of content. The services aim to provide a smoother Internet experience for users via storing cached contents at the end servers, instantly responding to nearby users' visiting requests. Thanks to their decentralised nature, CDN companies are inherently fitted to explore edge computing practice.

CDN transcends to edge computing and edge cloud in China

Echoing the US edge cloud market, the domain in China is also led by public cloud providers as well as CDN players. In China, the CDN market is dominated by major public cloud providers, including Alibaba Cloud and Tencent Cloud, Huawei Cloud and traditional CDN companies ChinaNetCenter and BaishanCloud. Due to the trending of the 'Mobile Internet' and ICT technology upgrades, the CDN business has advanced. While AI, IoT and Industrial Internet started to be adopted in China, the change in business demand prompted the emergence of edge computing and cloud companies, as these began to shape their profiles in the field.

Currently, some take edge cloud as a nice-to-have business while others choose to go all-in with edge cloud. China's public cloud market size has been scaling rapidly and public cloud providers focus on making the 'cake' bigger in order to get a mouthful slice. Although in an early stage of development and not yet the main revenue pillar, the Edge cloud market is increasingly drawing the attention of big public cloud providers and top CDN vendors. It is being treated as an essential and integral part of their cloud strategies. 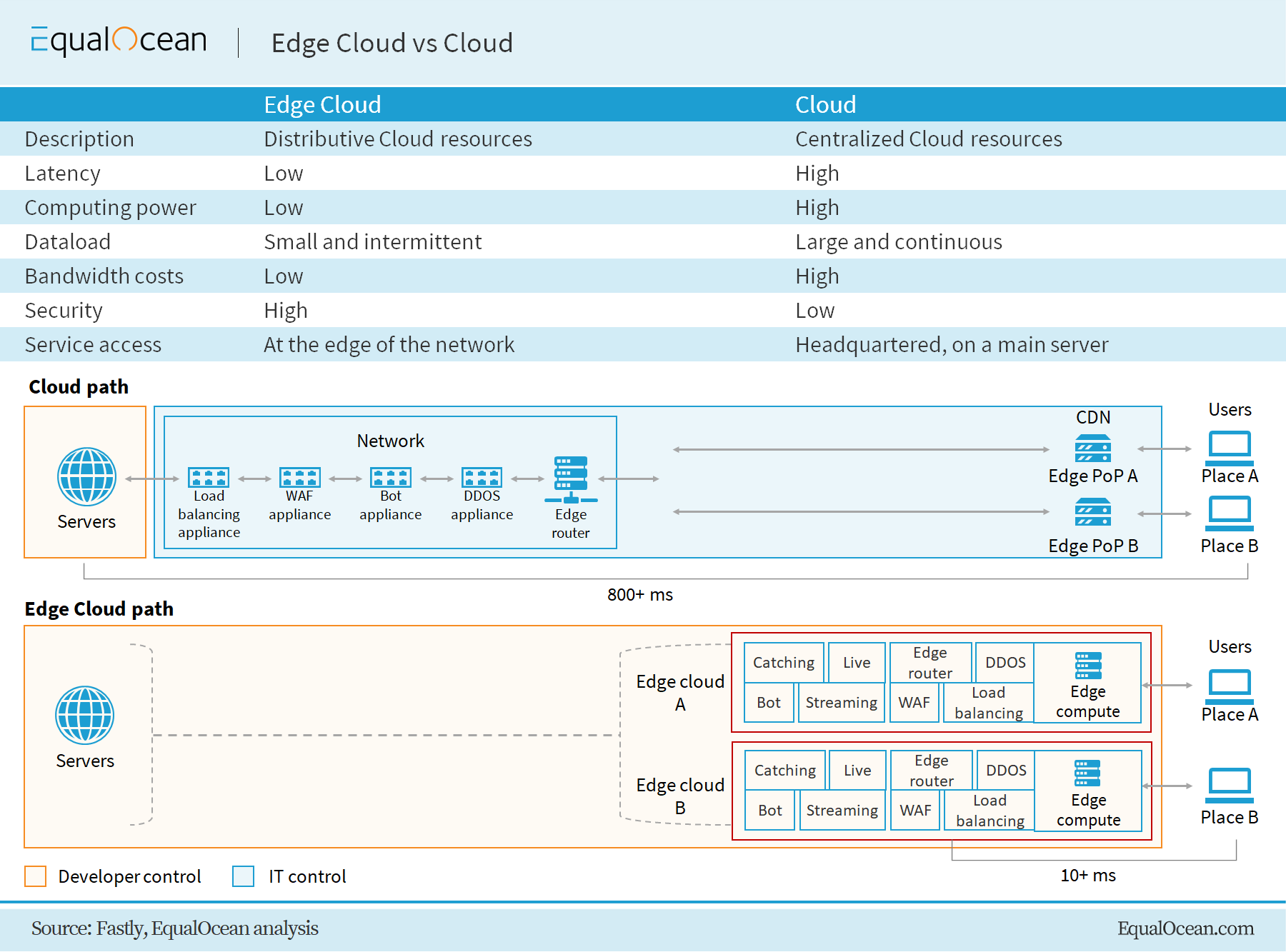 The public cloud business is based on the concept of centralisation. Large IDCs with cabinets and huge computing power are centered and public cloud providers make profits from growing client clusters. They can internally allocate and optimise cloud resources depending on clients' plans or actual use. Edge cloud is not about the size of use but the instant response. Traditional centralised network architecture sacrifices response speed and network latency may reach 800ms or even longer, but edge cloud can reduce latency to as low as 50ms, which is critical for some IoT scenarios like autonomous driving and manufacturing.

A mirror to edge cloud market through BaishanCloud

The difference in business nature and interests yields opportunities for CDN companies in the edge cloud area. Owning more than 600 PoPs worldwide, BaishanCloud is a top 5 CDN vendor in China in terms of business size and technical capabilities. With such a legacy, the company has gradually engineered and matured its edge cloud product matrix since 2017. In response to regional/local cloud service demands, edge cloud services call for similar fundamental functions including cloud security, storage, computing, analytics and other services, which are not necessitated on traditional CDN business but with more agile and loosely coupled architecture compared with the centralised cloud.

Technologies like 5G and IoT sensors accelerate the generating of data – thus data security has been addressed more frequently than ever. As edge cloud is closer to where data is generated, security solutions of edge cloud services are in demand. In 2019, BaishanCloud acquired Shanghai YUNDUN, a top cloud security company in China, to enhance the security product feature in its edge cloud functions.

Meanwhile, the cloud industry has been emphasising usefulness rather than blindly developing 'white elephant' services – this represents a change in enterprise value: customer first. For BaishanCloud, helping clients benefit from cloud capabilities is the top priority and the cornerstone of the company's long-term cloud strategy. At the same time, the fine line between IaaS and PaaS is diminishing after integrating cloud services into practical solutions and BaishanCloud's edge cloud platform, consolidating many IaaS and PaaS services into one.

IT upgrades and adoption of the cloud create a diversified technological environment – the heterogeneous IT infrastructure is common. The diversity in the IT environment requires cloud vendors to offer compatibility. Therefore, edge cloud providers are also making efforts to guarantee users a smooth experience.