A festive season for Muslims, Jews and Christians is a worrying time for Israel

For only the second time in my life, Muslims will celebrate Ramadan as Jews celebrate Passover and Christians celebrate Easter.[1] It should be a time for shared celebration of revelation and redemption and remembering the ties that bind together the world’s three great monotheisms. Unfortunately, it seems more likely this year will be an opportunity for terrorist attacks to topple the Israeli government and ignite another uprising, similar to the tragedy of last year’s Ramadan.

The Israeli thriller Fauda is perhaps my favourite television show. As a middle-aged, bald Jewish man who is slightly heavier than he would like to be, I cannot resist the allure of an action hero who is a middle-aged, bald Jewish man who is heavier than I am! Season two of Fauda, however, was criticised for having a plot that revolved around a Hamas operative shifting his allegiance to the Islamic State and carrying out attacks inside Israel’s internationally recognised borders with a small group of supporters. In 2017, when the show was filmed, the Islamic State was focused on maintaining its territory in Syria and Iraq, not trying to project power through lone wolf attacks in other parts of the world.

Today, the Islamic State has been extinguished as a political entity, but it is alive and well as a terrorist organisation. Indeed, a series of four terror attacks in Israel in the past month have more in common with the world of Fauda than the highly organised, state-sponsored terrorism of previous uprisings. The perpetrators all appear to have acted alone or in small groups. Two of the four attacks were carried out by Arab Israelis rather than Palestinians, a worrying trend that also characterised last year’s violence. Although there is no clear centralised command and control behind these attacks, at least two of the attackers have been linked to the Islamic State and have communicated with Islamic State members abroad.

Most critically, however, these attacks are all deep within Israel’s internationally recognised borders. As such, they have punctured the sense of security that had been provided by the wall separating Israel from the Palestinian territories on the ground and the Iron Dome missile system protecting Israel’s skies. Even though only 14 people have died, the fact that terror has returned to the trendy bars and restaurants of Tel Aviv’s Dizengoff Street means that these attacks will have a unique political salience.

Israeli authorities have tried conscientiously to avoid missteps like those that sparked last year’s violence, preferring instead targeted raids on the families and associates of the perpetrators of attacks and detention without charges of Israeli Arabs and Palestinians suspected of sympathising with the Islamic State. Nevertheless, the situation is a powder keg waiting to light, and even misunderstandings stemming from necessary measures to manage traffic as worshippers of all three religions converge on Jerusalem’s Old City could be the spark. Although neither Hamas nor Islamic Jihad appear to have played a role in the attacks so far, both groups have indicated that they stand prepared to intervene should Israel take action affecting the Al-Aqsa Mosque or the celebration of Ramadan. On the other side, the Israeli government will feel pressured to impose wider restrictions on Palestinians if terror attacks continue. An aggressive terrorist attack over the joint holiday weekend could push Israel and the Palestinian factions into war.

Foreign governments are actively working to prevent such a war. Egyptian intelligence is reported to be meditating between Israel and the Palestinian factions. US diplomats have been raising concerns about the danger of attacks during the confluence of the holidays with the Israeli, Egyptian and Jordanian governments, and with the Palestinian Authority. The head of Shin Bet, Israel’s internal security service, made his first official trip to the US in March to discuss the security situation over the holidays with his counterpart at the FBI. Nevertheless, diplomacy and restraint may fail to prevent the outbreak of war.

This would be a war that the government of Israel can ill afford. While Israeli Prime Minister Naftali Bennett was trying to broker peace in Ukraine, Benyamin Netanyahu was more successfully wooing Knesset members from Bennett’s Yamina party (literally translated as “rightwards”) to abandon Bennett’s eight-party coalition, which includes Arab, left-wing, centrist and right-wing parties committed to forming a government without Netanyahu, to join Netanyahu’s Likud party and its allies on the political right. It only took one defection, by the government’s whip Knesset Member Idit Silman, to deprive the government of its wafer-thin majority. Having succeeded at using pressure from her Orthodox religious community, and indeed from her husband, to force MK Silman to leave the coalition, Netanyahu is now targeting other Orthodox members of Yamina, including with large protests outside their homes.

Figure 1: The Knesset is balanced on a knife-edge, and the government has only 60 of the 120 seats 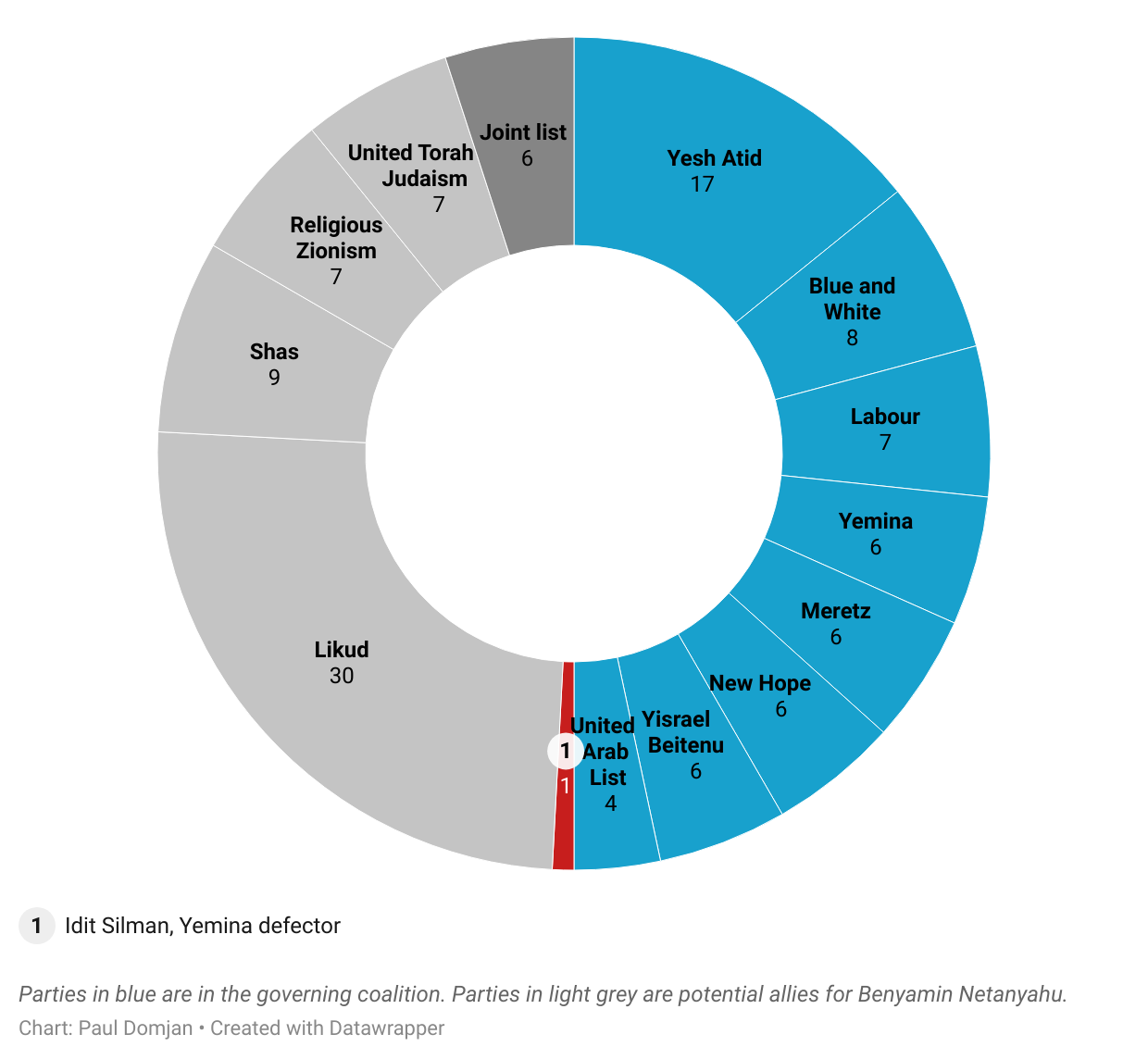 Instability in the Knesset appears likely to turn Bennett from a peacemaker in Ukraine to a potential belligerent in the Middle East. A black joke is making the rounds in Israel that Bennett’s best chance of saving his premiership would be to invade Iran. While that dark humour seems extremely unlikely to reflect reality, Bennett will need to show his right-wing political base that he can take a tough line on Palestinian terrorism and protect Israel. Not only does this make it more likely that he will take the sort of more aggressive action that could start a war with the Palestinian factions, but it also increases the incentive for the Islamic State to continue its string of terrorist attacks and precipitate that escalation. Fauda’s overarching theme – that violence begets violence and loss for both sides – seems as relevant now as ever.

[1] Easter and Passover almost always align – after all Jesus’s last supper was a Passover seder –but there are still some years (three out of every 19 in fact) when they don’t.