Significant increases in the airline's operational indicators. In 2020, COVID-19 significantly impacted Volaris' numbers. However, the airline has shown a more accelerated recovery than estimated, increasing its capacity in response to higher demand. In that sense, the outlook for 2021 is favorable, considering the expected economic recovery, but especially that in the air sector. Likewise, after the exit from the market or operations readjustment of several competitors, the company has positioned itself as a leader in Mexico. Thus, significant rises in capacity, passengers and a more stable fare scenario would boost Volaris' revenues by +52.1% y/y. Likewise, the cost reduction focus and the expected FX appreciation (43% of expenses in US dollars), partially offset by a higher fuel price (33% of expenses), would lead to a significant growth in EBITDAR of 122.1% y/y, with a 28.1% margin (+8.9pp). Obviously, this will depend on the evolution of the pandemic. Thus, we established a PT2021 of MXN 31.00, which represents a FV/EBITDA 2021e multiple of 9.5x, below the current and sector average 2021e of 10.1x. Despite the recent rally in stock (>30% L3m), the solid recovery alludes to the fact that the airline continues to be an interesting investment opportunity.

Remarkable recovery in 2021. As we have already mentioned, the air sector has been one of the most affected by the pandemic, due to the confinement and travel restrictions that have directly impacted passenger demand. However, a significant sequential improvement was observed from June 2020 onwards. It should be noted that Volaris stands out for showing the most accelerated recovery of the sector, taking advantage of the opportunities that have arisen from the reorganization of the participants in the air industry, where some have restructured or even left the market. According to the airline, it is estimated that by 2020 the capacity of the air sector in Mexico will be reduced by a third.

In this regard, by 2021, the perspectives for Volaris are favorable, since fewer mobility restrictions and the evolution in the vaccine application against the coronavirus, as well as a better economic dynamism, should translate into a greater air travel demand. It is important to mention that this will also depend on the evolution of the sanitary contingency in view of the recent upsurge of infected people. On the other hand, the airline's low-cost business model allows it to offer low fares, thus encouraging demand and seeking to gain a potential market by competing with first class bus lines. Therefore, we believe that the company will continue to be one of the main beneficiaries of the recovery, reaffirming its leadership position. This has been reflected through a consistent increase in Volaris' participation in the industry, as we can see in the following graphs, where in 2018 such share was 26.3%, at the end of 2019 it rose to 29.0%, and finally, after the impact of COVID-19, the gap has widened significantly, reaching 43.7% in November.

Considering the above, we expect Volaris to end 2021 with 87 aircraft (vs. 86 in 2020e). We expect passenger traffic to have a large increase of 49.4% and thus reach the same volume with which it closed in 2019 by the end of this year. It should be noted that our slightly more conservative position, relative to the company reaching that level by mid 2021, is mainly due to the upsurge of the pandemic in recent months. We believe that the VFR (Visiting Friends and Relatives) segment would continue to show the strongest performance, while the international side would continue to exhibit a slower recovery.

We anticipate that the airline will continue with its flexible strategy to adjust capacity depending on the demand dynamics. Thus, we project an increase in Available Seat Miles (ASMs) of 39.3% and in Revenue Passengers Mile (RPMs) of 46.2%, which would place the load factor at 83.4% (+4.0pp y/y). In that way, for both AMSs and RPMs, the airline would reach 2019 levels this year. 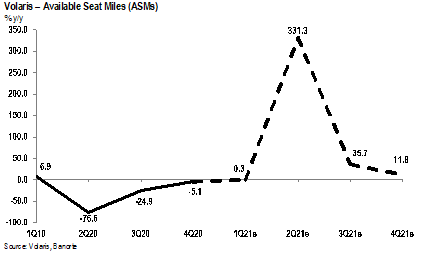 We estimate that the average fare per passenger will show some stability to stimulate demand, thus the variation would be +1.8% y/y, equal to the increase we expect for higher ancilliary revenue per passenger, which would have a more difficult comparative basis due to the strong growth observed in 2020. With this, we estimate an annual rise in total revenues of 52.1% to MXN 34.3 billion. Thus, we anticipate that total revenues from ASM (TRASM) will increase by 9.2% y/y.

Significant increase in operating margins. Volaris stands out for having one of the lowest cost structures in the sector at a global level, continuously seeking to be more efficient. The focus on cost reduction and the expected FX appreciation (43% of total L12m. expenses are in dollars), would be partially offset by higher fuel prices (33% of total expenses). Thus, we estimate a decrease in Cost per Available Seat Mile (CASM) of 10.0% and in CASM ex-fuel of 18.5%. This would result in a sharp jump of 122.1% in EBITDAR to MXN 9.6 billion, with a 28.1% margin (+8.9pp y/y). Despite the operational advances, the airline would register a MXN 356 million net loss due to higher financial expenses.

It should be noted that equity is negative because of a net loss in 2020 (MXN -4.9 billion estimated) and 2021, as well as the negative FX effect on dollar-denominated lease liabilities (resulting from the adoption of IFRS-16 on leases). We believe that the recovery in equity will depend on the improvement in results and the effect of the FX rate referred to.

Financial strengthening and leverage reduction. In order to improve the capital structure, and to be prepared to take advantage of the opportunities of the environment, Volaris made a follow-on equity offering, with which it obtained net resources of <s>US$164 million (</s>MXN 3.3 billion). As previously mentioned, the airline's strategy of financially strengthening prepares it to consolidate its leadership position in the air sector recovery in Mexico. Thus, we foresee a significant improvement in the leverage indicator in which we estimate a Net Adjusted Debt/EBITDAR ratio for 2021 of 5.8x, vs. 12.8x 2020e, which we consider a more normalized level.

Risks. Regarding our estimates, we have to be aware of some of the risks involved. Among the main ones we mention: (1) The evolution of the pandemic; (2) the volatility of the peso/dollar exchange rate, since a depreciation of the peso impacts the company's numbers; and (3) the oil price behavior, taking into consideration that aircraft fuel is what most impacts the airline's expense structure. It is important to mention that these last two variables are very volatile.

To determine the theoretical value of Volaris we used a multiple valuation methodology. It is important to mention that the current and 2020e multiples show some distortion because of the impact of the pandemic on airline performance, while the 2021 multiples should already show substantial improvement.

Thus, highlighting the significant recovery in Volaris for 2021, by assuming a FV/EBITDAR 2021e target multiple of 9.5x, our PT2021 is MXN 31.00 per share, is equivalent to a potential return of 34.4% vs. the current price. Our target multiple represents a 6.0% discount from the sample average (10.1x). We believe that this multiple is reasonable, even considering Volaris' better operating performance vs. comparables, as well as its positioning in the sector, given the inherent industry risks already mentioned.

Despite the recent rally in the stock (>30% L3m), we believe that Volaris stands out for its timely and flexible capacity adjustment strategy, and its low-cost business model that allows it to stimulate air transport demand through low fares and stand out in terms of profitability. We reiterate our opinion that it will be one of the main beneficiaries of the industry's recovery and thus confirm its leading position in the air sector. As a result of the above, our recommendation is Buy.