Already, c25% of the world’s population live in extreme water-stressed locations, according to the World Resource Institute, and given rising water demand (and limited supply growth) we expect the situation to worsen over time. In the most acutely affected areas, water shortages will impact both quality of life and the economy. There will be major economic implications even in areas where water scarcity is currently less severe but expected to worsen.

Water scarcity arises from both demand and supply factors

On the demand side, water usage is rising continuously due to a growing global population (agriculture is the biggest user of water) and industrialisation (many methods of electricity generation are water-intensive). Global water consumption is twice what it was in 1960s and demand growth shows no signs of slowing.

Looking at the supply of water, only 3% of the world’s water resources are available for use (ie freshwater) and of these, c70% of these supplies are locked in glaciers. In addition, climate change is creating uncertainty as there is an increasing frequency and severity of droughts and floods in many parts of the world.

MENA and South Asia are the most water-stressed

Water shortages are a key concern for countries in MENA and South Asia. The chart below shows the baseline water stress (ie annual water withdrawal divided by available resources). 17 countries face extremely high water-stress and most of these are in MENA (eg Qatar, Israel, Lebanon) and South Asia (eg India, Pakistan). These countries are vulnerable as they already utilise most of their available water (>80%) and are prone to severe water shortages when demand swells or supply is disrupted. We have seen recent high-profile examples of acute water shortages (such as Chennai in India, Cape Town in South Africa). In addition, c27 other countries, mainly in Central Asia, Europe and Sub-Saharan Africa, are under high water stress (using 40-80% of their water resources). The situation is likely to worsen in the coming decade.

As per the World Bank, MENA could face one of the biggest hits to its economy due to water scarcity. The impact has been estimated at 6-14% of GDP by 2050. Along with MENA, we think that countries with high contributions from agriculture such as Pakistan (23% of GDP from agriculture) and India (15%) could also suffer significant economic headwinds. 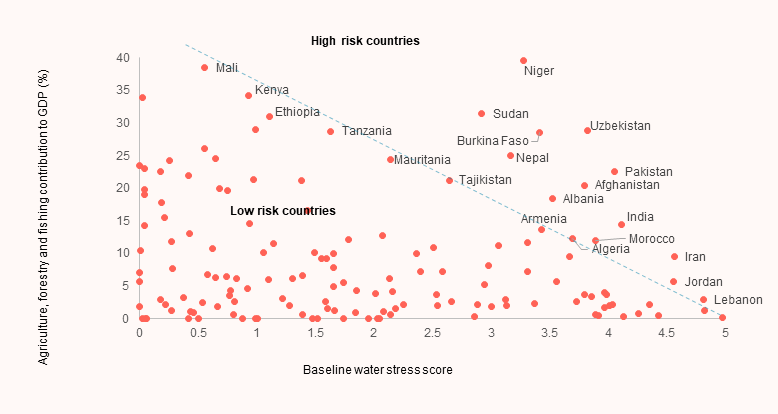