The second term of Nigeria’s President Buhari presents an opportunity to drive faster and more inclusive economic growth in Nigeria while also diversifying government revenues. Success will likely depend on the Economic Recovery and Growth Plan (ERGP) that aims to structurally transform the country. In today's 2020s Vision theme, we ask: could this finally unleash the potential of Africa’s largest economy?

What if it all went right?

Upon successful implementation of the three-year plan ERGP, we estimate that GDP growth could reach 7%, driven by a sharp rise in output in both the oil and non-oil sectors, supported by government initiatives and policies to improve the ease of doing business, boost power supply, narrow the infrastructure deficit as well as increase private sector participation. Such an expansion in GDP could create as many as 15mn jobs in the economy, providing a shot in the arm for consumer spending.

Reforms to support the oil sector

We think oil output will rise to 2.5mbpd from c2.0mbpd (incl. condensates) on the back of the passage of the four-part Petroleum Industry Bill – which should enhance transparency, corporate governance and investment – and the successful transition to incorporated Joint Ventures to finance oil exploration and production projects. Furthermore, the Dangote Refinery, which should be operational in Q1 21, could aid efforts to liberalise the downstream sector.

Power is key to non-oil growth

We expect non-oil growth in the next decade to be driven by four main sectors: Manufacturing, Trade, Agriculture and Construction. All four stand to benefit from improvements in the power industry. The government plans to double power supply to 10GW, aided by increased gas production and supply as a result of the completion of critical pipeline infrastructure such as the Obiafu-Obrikom-Oben pipeline and the Escravos Lagos pipeline system. Power distribution should also be supported by the implementation of cost reflective tariffs, which should aid liquidity and capex spending.

The manufacturing and trade sectors should be direct beneficiaries of the increase in power supply, leading to higher output and efficiency gains, while stronger consumer demand should also be a driver of long-term growth.

Furthermore, the administration’s drive to narrow the infrastructure deficit in transportation (road, rail and seaport) should increase output in the construction sector. Improvements in transportation as well as the Dangote Fertiliser plant coming onstream in 2020, will enhance productivity across the agriculture value chain.

An acceleration in GDP growth should enhance government revenues, while increasing use of technology, particularly at the Nigeria Customs Service and Federal Inland Revenue Service, could reduce leakages in the notoriously porous system. The projected increase in oil production could add as much as US$2.2bn (NGN800bn) annually, while the widening of the tax net, higher non-oil output and the gradual increase in the VAT rate to 15% (from 5% currently) could generate close to US$1bn (NGN350bn) in incremental revenue per year. Such revenue gains could lead to a decline in the government’s fiscal deficit and domestic borrowing over the longer term. This, as well as an increase in domestic food supply on the back of higher output from the agriculture sector, should support a decline in headline inflation. In turn, this could lead to a lower – if not single-digit – interest rate environment.

The surge in economic activity, reduction in food imports (11% of total imports in 2018), improved ease of doing business and the successful operation of the Dangote Refinery and Petrochemicals Plant has the potential to transform Nigeria into a net exporter of petroleum resources, which would support foreign currency reserves and stabilise the local currency.

Too good to be true?

Nigeria has had such moments of opportunity before, but failed to take them. So what could jeopardise its transformation this time? Risks to the government’s goal include: 1) exogeneous factors such as lower oil prices and geopolitical risk; 2) heightened insecurity in various part of the country including the Niger Delta; 3) an OPEC output agreement, which could limit oil production growth; and 4) government policy inconsistency. 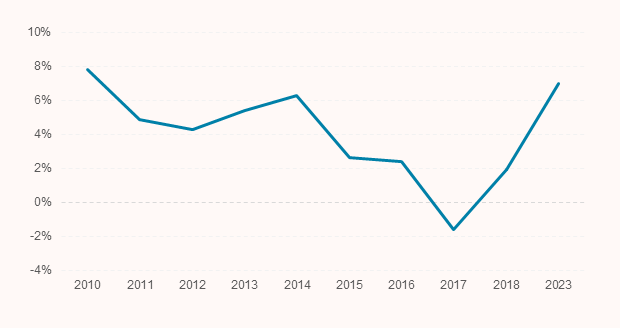 Source: Tellimer Research
*2023 is based on projected growth under the ERGP.