2020s Vision: Life beyond the index

MSCI and FTSE have assumed greater influence in the past decade, and ironically these index providers are now major share price drivers in their own right. But it has not helped the investment process in many markets. In the next decade, we think, in today's 2020s Visions theme, that investors will need to look beyond the confines of the index.

Everyone with a fundamentally driven investment process is frustrated by the last three years of massive distortions in share price performance driven by index-related EM passive fund inflows related to index re-classification of countries (Argentina, Kuwait, Pakistan, Qatar, Saudi, the UAE), and increasing index weights for companies after foreign ownership limit increases and M&A (particularly in the UAE and Qatar).

A key reason to look at Frontier Markets (FM) in the first place is to find faster growth in per capita GDP than that seen in developed countries, alongside economic “convergence” as property rights are better protected, human and financial capital is more efficiently mobilised and new technology spreads across borders. Another attraction is that these markets are generally less sophisticated and liquid, which creates the opportunity to invest in very good companies at prices that insufficiently reflect their outlook.

But MSCI criteria are based mainly on the state of sophistication in the stock market, not the state of development of the economy.

Iceland is a case in point. The country is already part of FTSE FM, and MSCI could include it in its FM indices as early as May 2020. But Iceland does not resemble frontier peers at all. Its population is much smaller (350,000), more aged (15% over 65 years old versus 5% in most frontiers) and much richer (US$74k per capita GDP versus below US$10k in most frontiers). Kuwait, another FM anomaly with over US$60k per capita GDP, is the largest constituent of the index.

Chart: Frontier index but not a true Frontier ethos 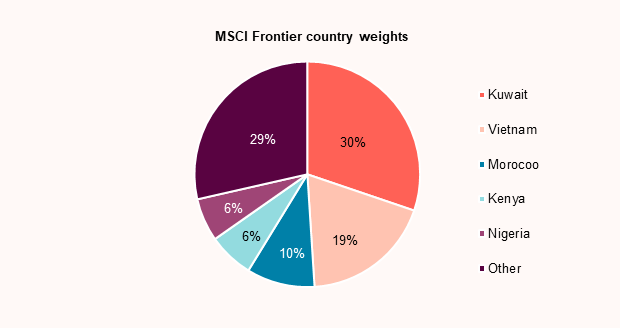 No planned new fund wants to set up with, and no existing fund wants to retain, the MSCI FM Frontier Markets benchmark. Instead we expect more index customisation and more persistent “off-benchmark” portfolio weights to become the norm.

Where to look for the true Frontier feeling

Markets such as Colombia, Egypt, the GCC, Pakistan, Peru and the Philippines, as well as Malaysia, Mexico, Thailand and Turkey (ie markets traditionally in the mainstream emerging markets domain), are all increasingly part of the debate.

The reasons for this are the search for greater liquidity for traditionally Frontier funds, the more typically “Frontier” fundamentals of these countries and their orphaning as the MSCI EM index itself becomes dominated by China, Taiwan, South Korea, India, Brazil and South Africa. There is currently extreme pessimism about the commercial viability of the Frontier and Small EM asset class, but we think life lies beyond the suffocating constraints of the indexes.

Ironically, the investment opportunity in these markets, relative to large Emerging and Developed equities, may never have been better. We explore this in our next theme, tomorrow.