Inflation at 0.49% 2w/2w in 1H-June. This was higher than consensus, but closer to our call. We highlight the 0.6% in goods within the core, especially processed foods (0.7%). Sodas were among the most pressured, likely impacted by adjustments by Coca Cola FEMSA. Other goods picked up 0.5%. In services, we had airfares and tourism services higher given an adverse seasonality (start of summer holidays) and a rebound after discounts during the Hot Sale campaign, with non-tourism still pressured in dining away from home. Non-core inflation was also stronger. In energy (0.2%), LP gas saw some relief (-1.5%), while low-grade gasoline increased (0.2%) despite higher subsidies, as well as electricity (2.6%). Agricultural goods were led by fruits and vegetables (1.0%), while meat and egg (0.7%) were pushed especially by chicken prices. 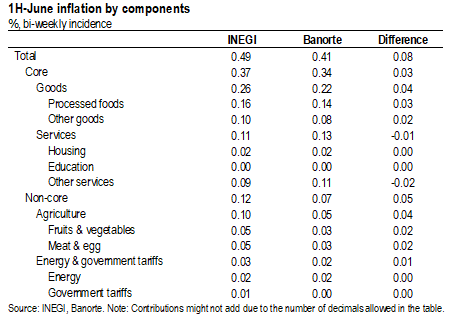 New high in annual inflation. In bi-weekly frequency, annual inflation went up again at the margin, from 7.72% to 7.88%. It is also higher than the 7.65% on average in May. We think this is quite negative and concerning as it seemed that the high was already past us since 1H-April. The core was similar, from 7.32% in the previous fortnight to 7.47% (May: 7.28%). In the short term, news remain negative. For example, Bloomberg’s commodity index and US gasoline prices reached new highs recently. Locally, some developments include: (1) Crops being affected by the drought in at least 19 states, also with disruptions because of hurricanes in the south and water scarcity in the north; (2) the $1 peso increase in public transportation tariffs in Mexico City; and (3) higher prices for TV extensions in telecom services (e.g. Izzi). Although the direct impact from the last two may be modest, we believe they reflect an environment of tighter profit margins due to higher input costs.

Following this release, we revise our inflation forecasts higher. For year-end, we estimate the headline at 8.1% from 6.7% previously (chart below, left). First and foremost, we have incorporated the latest upward surprises –especially at the core, see chart below on the right–, including today’s print. This had already signaled that inflation would end the year at least above 7%. We also add a higher impulse from food items, both processed foods and agricultural goods. In this respect, climate problems, events such as the avian flu in Mexico and the US (which could keep pressuring meat & egg) and input scarcity (both for production of these goods and/or their packaging) still point to a challenging outlook. In other tradable goods, the NY Fed estimates that, as of May, global supply chain pressures had stabilized in the past three months. Nevertheless, they remain at historically high levels. Although other developments have been more favorable at the margin (e.g. Chinese lockdowns), disruptions have extended far more time than we had foreseen. In a good scenario, we believe these could lessen by early 2023. Hence, core inflation would be at 7.8% instead of 6.4%, with a local high reached until November virtually around 8.00%. In this backdrop, President López Obrador stated that the government is working on a new plan to contain pressures in food prices, among other measures, albeit without further details so far. Therefore, we will look carefully at the details in this front.

On a more positive note, energy price pressures –including LP and natural gas, as well as low- and high-grade gasolines– would be lower than expected. Specifically, global oil prices may have left their peak behind, decreasing in recent days to a great extent because of heightened recession fears. Given central bank’s determination to fight inflation despite of the latter, this concern will likely dampen a strong move upwards because of the demand outlook. Locally, the government policy of not collecting excise taxes and to subsidize gasoline prices has had a meaningful impact to the downside on annual inflation. According to our calculations, the price of low-grade gasoline by the end of May would have reached MXN$31.47 per liter without said measures, instead of an actual average national price of MXN$21.73 per liter, according to the monitoring from the Energy Regulatory Commission (see chart below, left). As a result, annual inflation in said month would have reached at least 10.9% (as this calculation does not consider possible second-round effects), much higher than the actual print of 7.7%. In our view, the MoF will maintain this policy for the foreseeable future.

For 2023, we increase our estimate to 4.1% from 3.9%, with a more gradual path lower. For the core, we modify our forecast to 3.9% from 3.6%. At first sight, this does not look like a sizable change. Nevertheless, it would materialize despite a much higher base effect. In this sense, this path implies a more gradual path lower for inflation relative to Banxico’s latest forecasts (see charts below), without converging to the target in 1Q24.

Among the factors considered, we highlight: (1) A new, double-digit rate increase in the minimum wage for 2023, in an environment of high cost pressures for companies; (2) the possibility of a higher ‘lighthouse effect’, both because of the previous driver, but also on high current inflation that will likely be reflected in wage negotiations; and (3) eventually, a less rapid decline in domestic gasoline prices relative to international benchmarks. On the last point, we assume that central bank’s aggressive hiking cycles globally will result in an important economic deceleration in 2023. In turn, this could push commodity prices down, assuming that there are no new problems because of the war in Ukraine and/or because of supply chains. In this context, we believe that government gasoline policies will serve as a ‘smoothing mechanism’ in both directions (higher and lower prices). Therefore, a decline in international prices will be seen as a more gradual fall in Mexico as current subsidies are reduced, and eventually, as excise taxes are collected again.

Banxico to raise 75bps today and will probably stay in a more aggressive cycle. In line with market expectations, we expect +75bps in today’s meeting to 7.75%, maintaining a hawkish tone. We believe the decision will be unanimous. Given the circumstances in terms of global monetary policy and price dynamics, we still expect a terminal rate for this cycle by the end of the year at 9.50%. Nevertheless, we will watch the statement’s details carefully as it is our take that risks are increasingly skewed to the upside. For details, see our document, Ahead of the Curve.

Market is fully pricing-in a 75bps hike in today’s Banxico meeting. Since the last decision, the market adjusted its expectations and accelerated the expected path of hikes amid heightened concerns about high inflation. In this sense, the short-end of the yield curve is pricing-in 75bps today and in the next two decisions, as well as two final +50bps moves in November and December. With this, the tightening cycle would finish this year with a reference rate at 10.25%; that is, 200bps higher than in the previous cycle. In this backdrop, we believe short-term rates look increasingly attractive. For example, the spreads to US Treasuries of the same maturity are quite wide as they fully incorporate a very restrictive cycle. In particular, the 2-year spread stands at 655bps, very close to its 12-month high. However, we do not rule out additional negative surprises in CPI, as observed today. These could add further pressures in this segment of the curve and keep volatility very high.

For real rates, CPI-linked bonds (Udibonos) remain expensive, particularly short-term securities. For example, the 3-year breakeven stands at 5.14%, way above Banxico’s target and its 12-month average of 4.66%. In this sense, we do not recommend directional positions in these securities despite inflation pressures.